There were two trees needing taken down.

Soon the first one was down. It lay facing the southeast. We would have quite a few mulching chips from its branches! But that was only half the job. The second tree, approximately the same size and height, had its branches growing all towards the northeast. If it fell that way it was in danger of destorying Michael’s walnut saplings or a young elm that we wanted to keep. (They’re a rarer species now.) More than that however, if it fell in that direction, the one cutting it would be put in a tight spot between the falling tree and the fence. The only escape route was down a steep hill. And, what’s more, the wind was against us.

Our goal then was to fell the tree as far southward as possible. Michael was the one cutting. First he notched it on the southeast side, about 90 degrees perpendicular to the way it was leaning. Then he began his cut from the back, coming from the north so that the bark remaining in tact on the south side would tend to pull the falling tree in that direction. Would it work?

About that time, Jonathan came out for a shift. He had come at an interesting time and would be a witness to the things that happened next. At about this point something amazing happened. The wind, which had quieted, now started to blow from the north—in our favor. I had never thought of that! We had prayed before the operation. We had asked God to bless us with safety and give us alertness. But we had never thought to ask Him to change the wind! Almost as quickly as I thought these thoughts, the wind reversed itself and blew very strong from the south. I picked some grass and sprinkled it in the wind. It flew almost horizontally the breeze was blowing so hard.

But then something else happened . . . the chain saw sputtered and stopped. Just stopped! At that point, it did not seem to us that things would go the way we hoped. We had cleaned the air filter on the chain saw earlier so we checked the gas and the sawdust around the sprocket. No problems there. Patiently and deliberately, Michael retrieved the second saw from the back of the truck. It roared to life and we repositioned ourselves. Michael stood on the north side of the tree with a good angle on the blade. I stood uphill. As soon as I saw the tree leaning to one side or the other I would signal to Michael. Jonathan stood directly behind me.

The morning sun shown from the other side of the towering maple. The wind blew. The cut on the back of the tree deepened. But the tree did not fall. Michael paused and looked up at the tree trying to discern which way it would go. A truck passed.

The saw blade width was now entirely within the trunk of the tree. We couldn’t go farther. To completely cut through the bark on the south side would free the tree to fall in any direction. We had done all we could. I remember Michael waiting there for a second or two at the base of the tree. Then all at once I realized that the wind was coming from my

left, from the north, ever so gently but unmistakably real and steady, and the tree was falling. Hinged perfectly, and aided by the breeze, it slowly tilted, fell through the air, and landed in almost perfect parallel with the tree that had gone before it! There it lay.

Praise the Lord! He had given us one more instance of His delight in hearing and answering us. In every aspect of life He works according to His ways and waits for us to lean on Him. “Trust in the LORD with all thine heart; and lean not unto thine own understanding. In all thy ways acknowledge Him and He shall direct thy paths” . . . and thy trees’ paths as well!  (Proverbs 3:5-6). 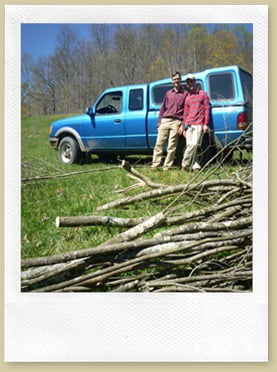