With no grape juice in the refrigerator, can you guess what I used as a substitute? I had a lot of fun with this month’s real-life photo assignment, Communion Bread and Cup!

This assignment is a great opportunity to get some practice in still-life photography! The first still-life shots I took were simple items against a white background. A clock. A camera. Some autumn leaves. But it seems like every time I sit down to do a still-life shoot, I learn something new. It isn’t the kind of photography I initially love to do; I’m in control of so much it’s overwhelming! But once I think through each aspect and push though the tough spots, I love the feeling of looking back at the best photos from a shoot!

And this shoot was no different. I continue to learn so much! Here’s some insight on what I was thinking while photographing this assignment.

Here is my very first shot. 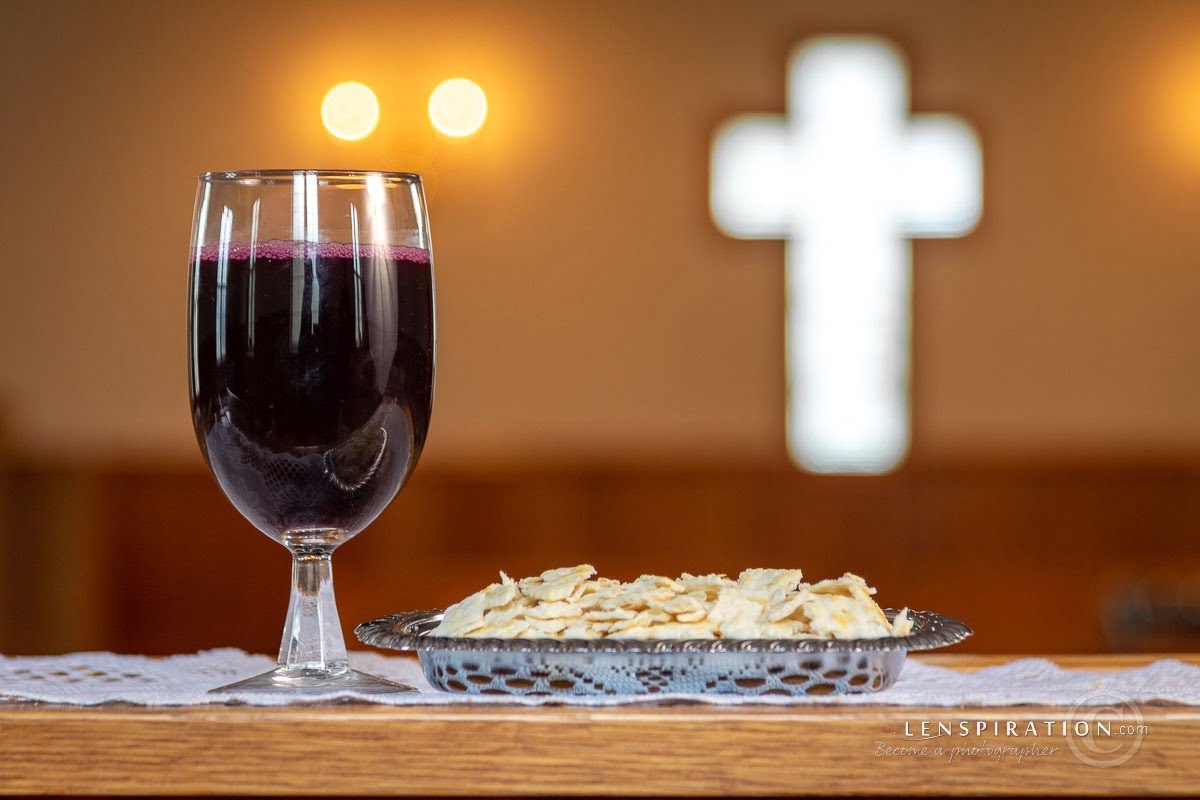 The first thing I noticed was the two lights in the background. I don’t know about you, but since it’s not readily clear what the light source is, they are just a little odd looking. Almost like “eyes”? I knew I needed to do something about them, so I tried placing them behind the glass.

The only way to hide the lights (and still have a pleasing composition) revealed the other lights on the other side of the cross. I kept moving around and working focal length to find a pleasing angle that included the cross and not the double lights. And then Pastor Dan said the lights could be dimmed! 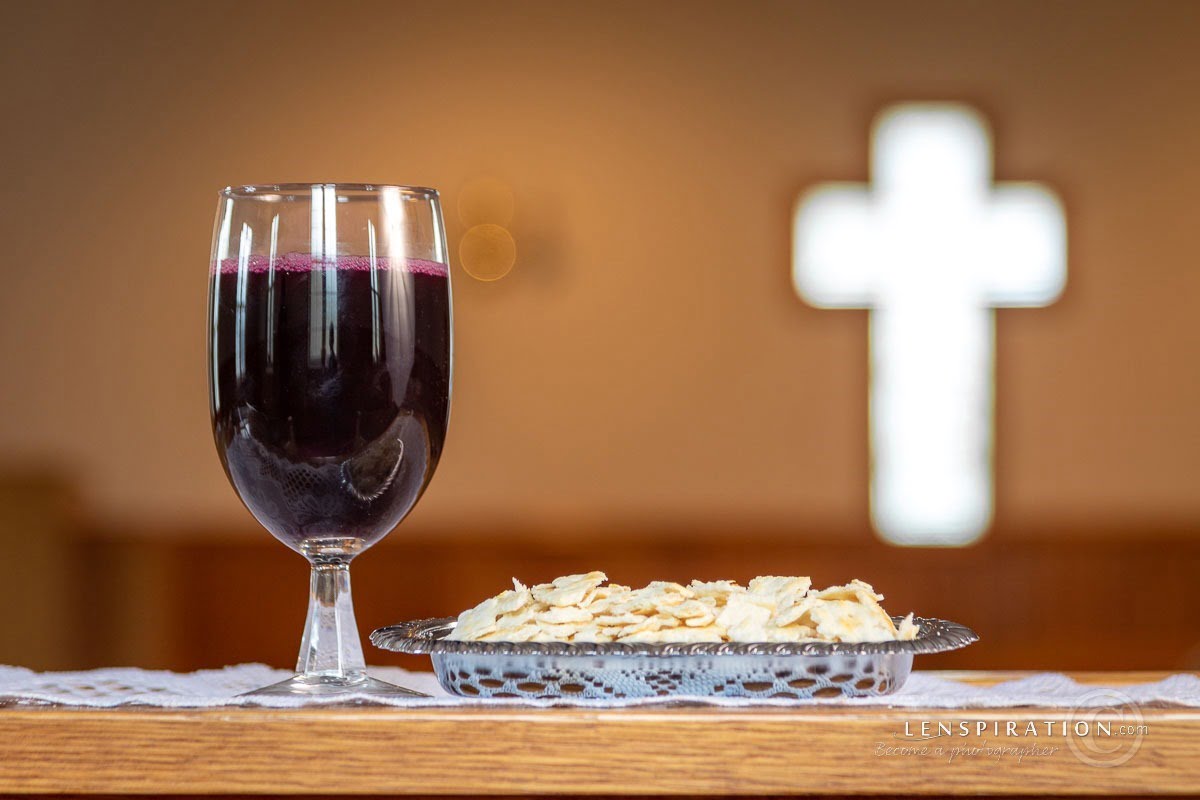 That was very helpful. But I did like the feeling that the bokeh and background glow created in the background. Perhaps they would look less like “eyes” if I made them smaller in the background? I accomplished this by moving from 100mm to 50mm. 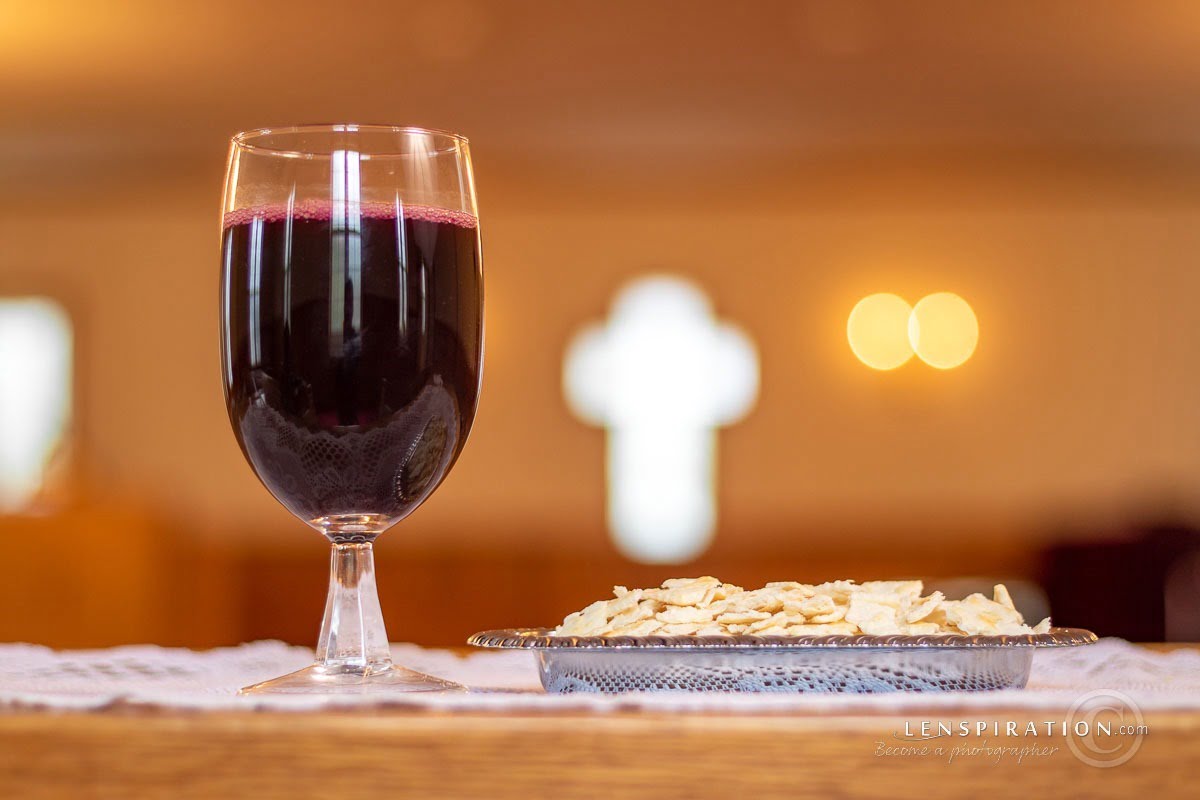 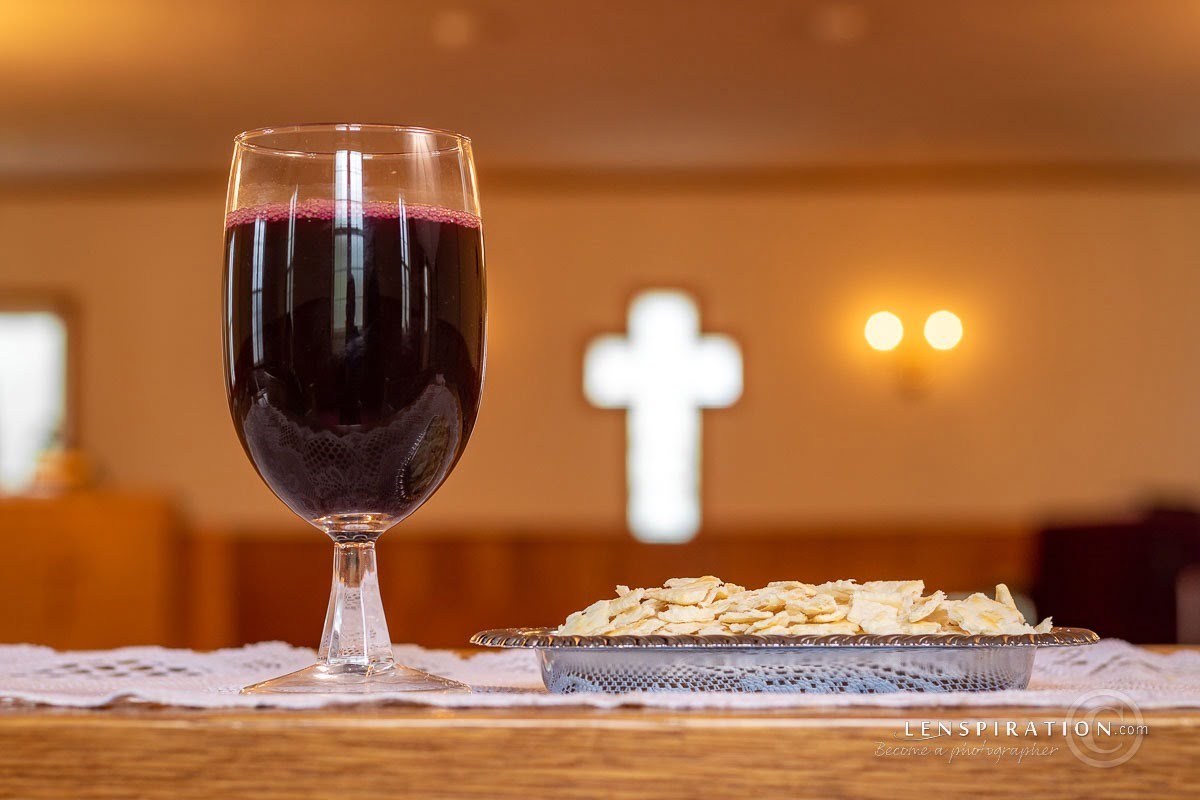 I like that shot. The narrower aperture allows the cross to take a more distinct shape. And it also allows for more of the cup and bread to be in focus. In retrospect, looking at the photos on the computer, I wish I had moved the cup backward (or forward?) just enough to get the foam in the cup to be as tack sharp focus as the crackers are.

Now that I had one photo that I liked, I figured I had better try shooting one that was more simple. So I zoomed in, went back to f/2.8, and cropped off just the very top of the cross to make it felt more like it was part of the background. 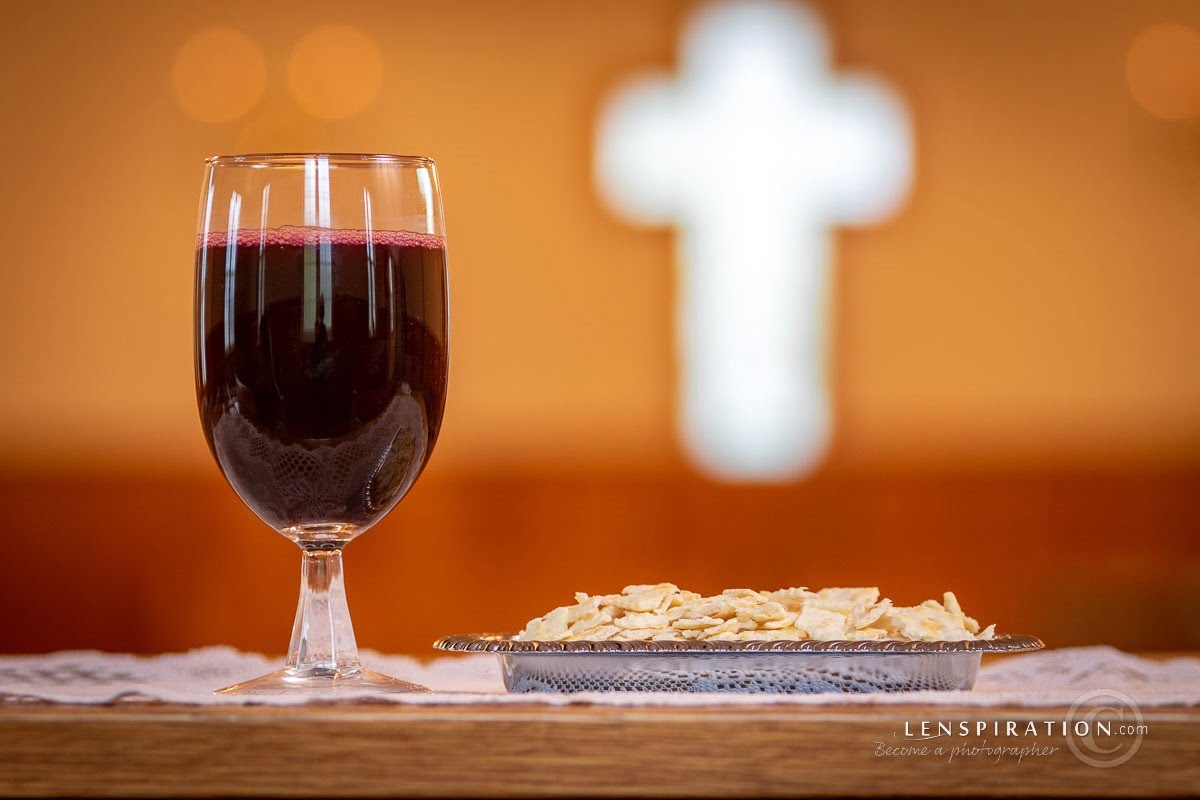 This is the shot I was going for that day. And I had spent quite a bit of time getting there! All the preparations at the house, getting to the church, setting up at the church, arranging everything, and then a full 17 minutes of tweaking after taking my very first shot. But it was worth it!

Now it was time to shoot some variations.

It’s interesting to see how each different background effects the emotional impact of the image. 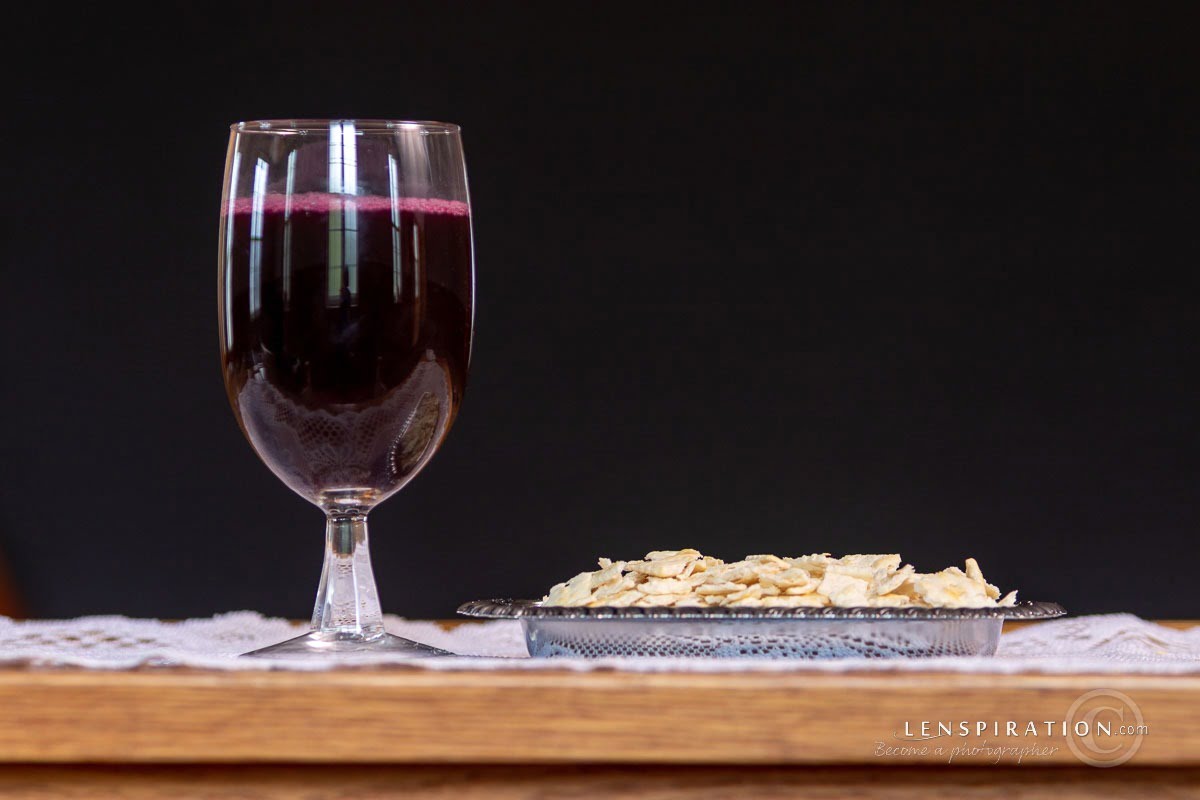 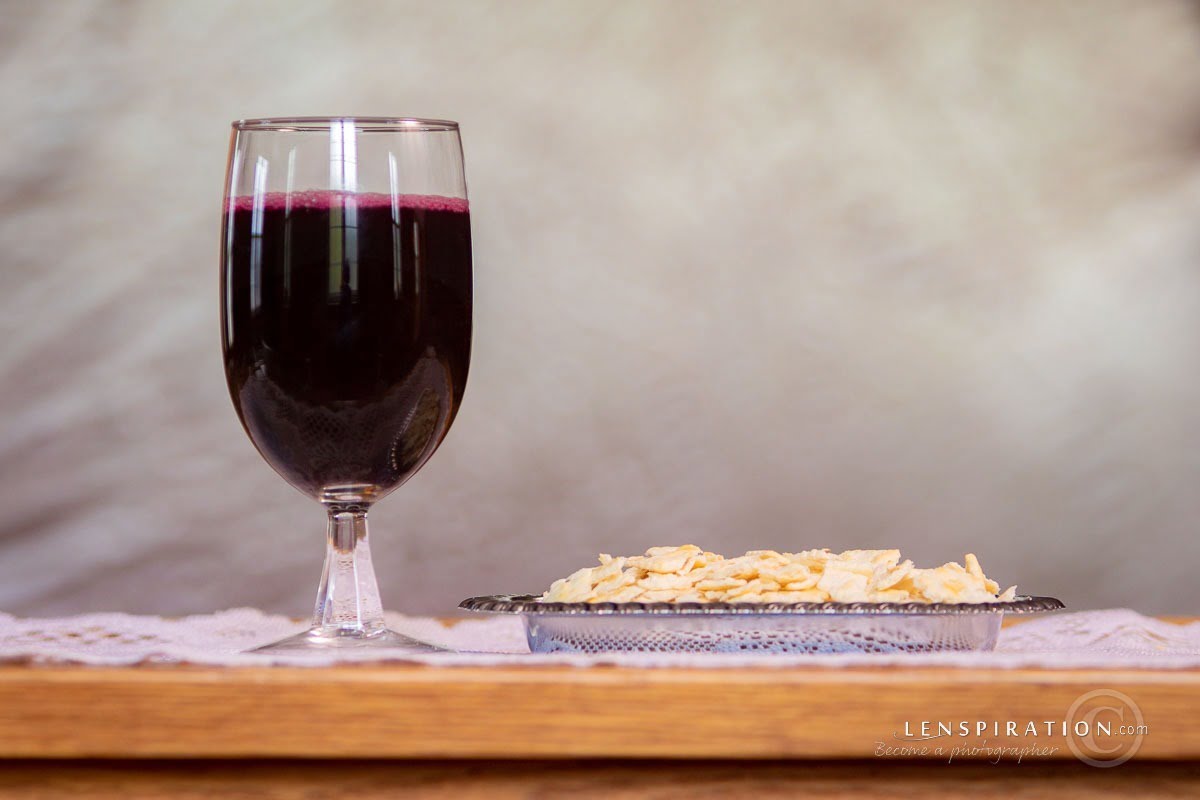 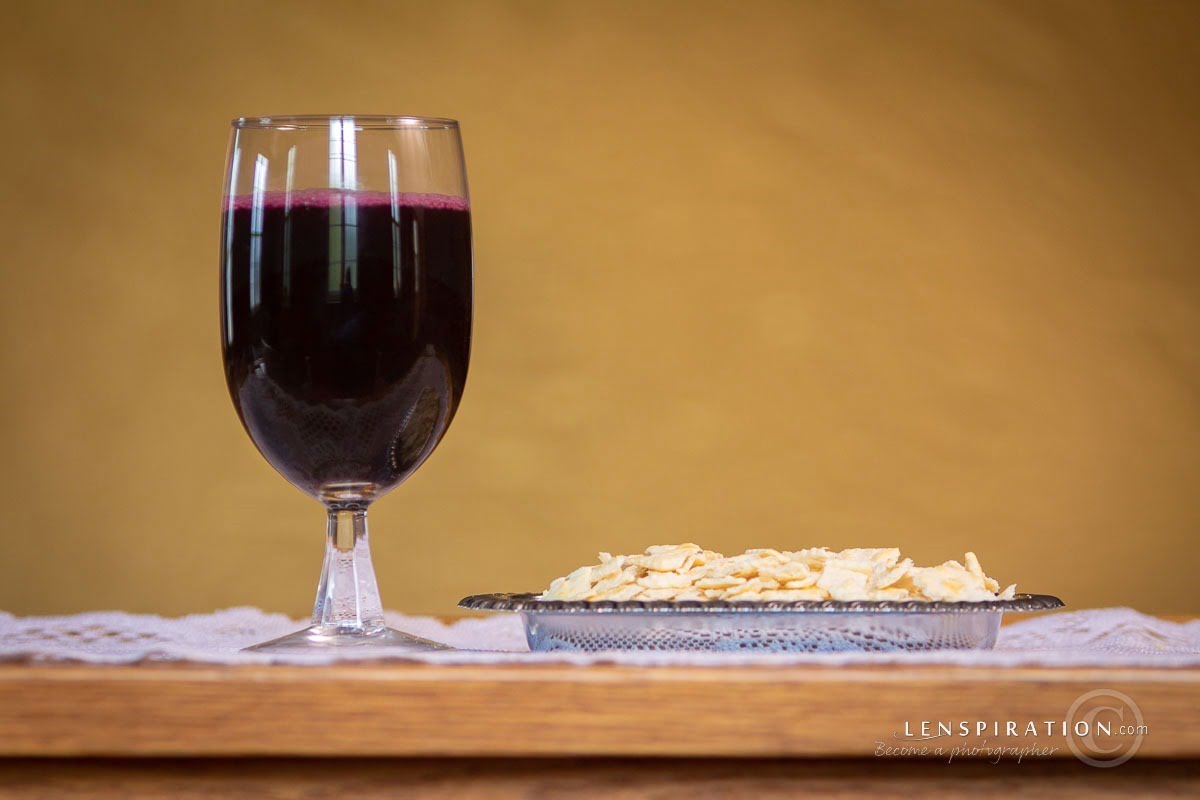 Isn’t the gold amazing! That was my favorite of the simple background.

But take a look at the focus. How astonishingly ugly! I can’t believe I took all those photos and didn’t catch the fact that my lens had been switched over to manual focus. Oh, I am so embarrassed! Moving on, moving on…. 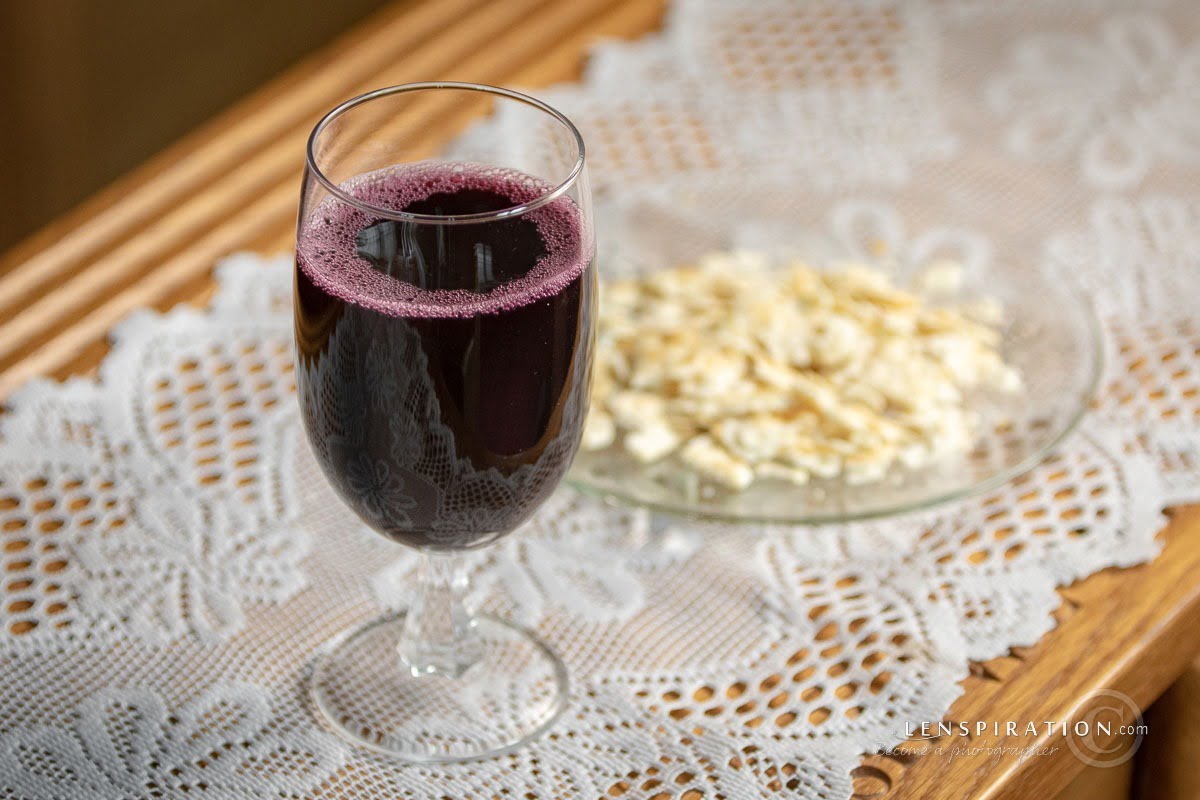 While shooting these different angles, Pastor Dan brought something else to my attention. Can you detect a subtle, yet grave problem with the following photo? 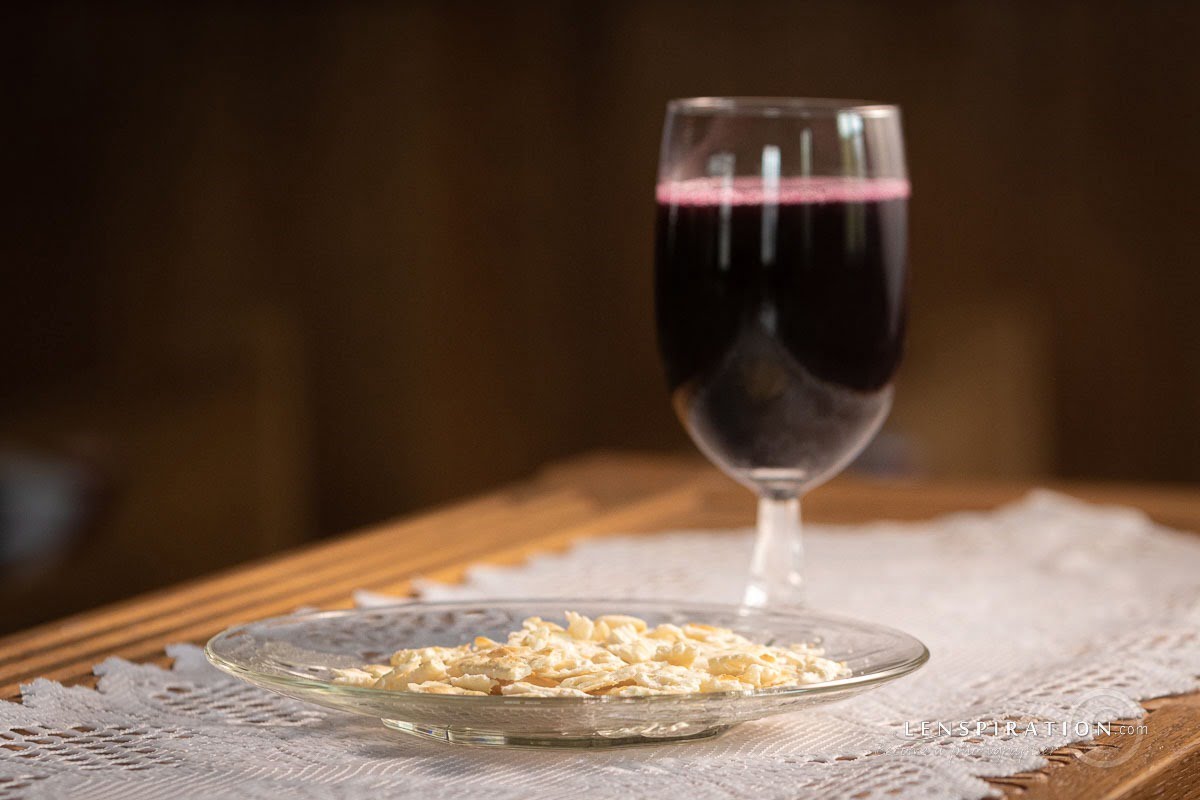 Since the table was propped up and not sitting on the floor, the tabletop was not perfectly level, resulting in the juice not being perfectly level! It’s obvious now, isn’t it. I hadn’t noticed it at all while looking through the viewfinder.

So, we fixed that! And I also fixed the element that I didn’t like about the juice being out of focus. The juice is the more prominent of the two subjects here so it should be the part in the focus. 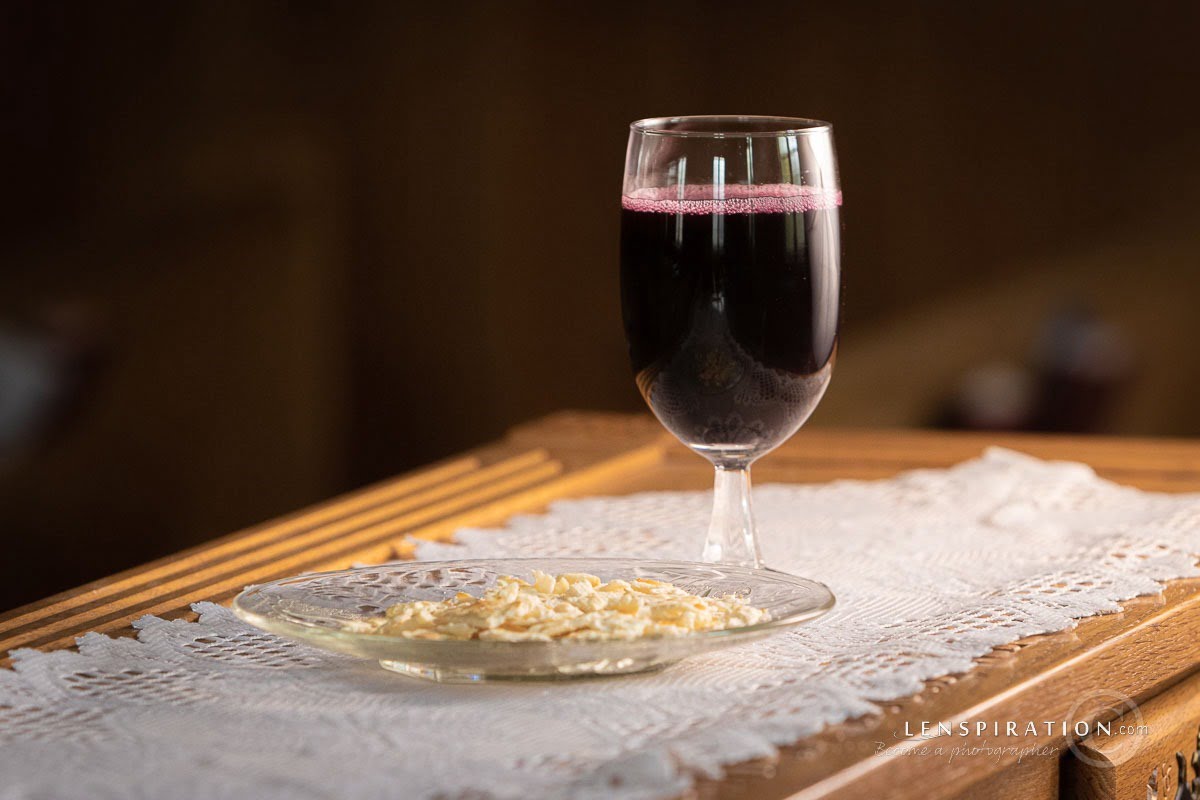 It had felt like a very long time photographing at the church, so I wrapped things up without creating a second setup. I couldn’t leave without trying a backlit shot, though! 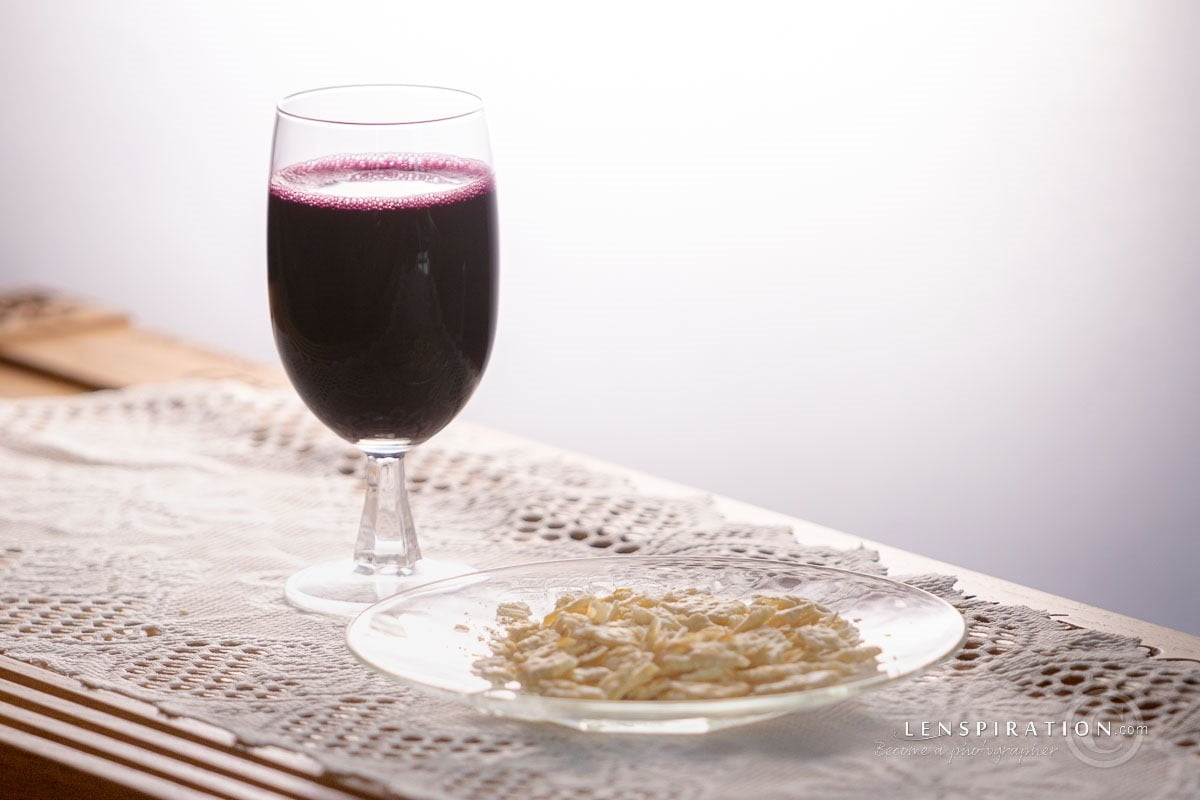 Now it’s your turn to shoot this assignment! Thankfully, it’s something easy that anyone could shoot practically anywhere. You don’t even need grape juice!

So, dust off your camera and go read for yourself all the details for this next assignment, Communion Bread & Cup!