When I found out that this next Lenspiration Shoot to Serve photo assignment was “Sharing the Gospel”, a lot of different ideas for what to shoot started coming to mind! A tract sitting with a tip on a table in a restaurant. A closeup of a Bible on the knee of someone in a living room with a group of friends. A person handing a tract so someone on the street. Even a street preacher maybe?

But regardless of exactly how a photo would be arranged, it needed people in it! So I started calling up folks I knew at church. I didn’t just call anybody. I called the people who I thought would enjoy posing for me. You probably know folks like that. Maybe you already go out on photo excursions with them! Well, first I called up an older gentleman named Larry. He loves to interact with people and is the kind of guy who would really get into pretending like he was sharing the Gospel with someone. In fact, he more or less wanted me to take pictures of a group of us going out to witness for real! I figured that would be kinda difficult, since I can imagine complete strangers wondering why on earth there was a guy walking around taking a picture of them being witnessed to. But it turns out Larry had family in town, so he couldn’t make it for the shoot. I also called another guy from church named Amos. In his teens. Quiet, but not of the character to be shy of how he looks. Then of course I called my brother David. My number one go-to model. And he would be available Sunday!

So, with a list of folks lined up, ready to help, the next step was to give a little pep talk and go out and shoot the assignment!

I was shocked at how un-creative I was on this photo shoot! All I could think of for folks to do was hand each other a tract. But that’s ok! At least I got some good pictures of that! And not every location turned out to be stunning.

That first location was so tough. The bus booth. The angle I wanted required me to stand out in the middle of the road. I wanted to zoom in all the way to 200mm, to get the nice background blur, but the framing wasn’t right if I was standing on this side of the street, or the other side! So I tried changing my angle on the bus booth. I didn’t like that second angle nearly as much. You couldn’t see the guy sitting in the booth! So, I walked away from that idea with just one shot that I liked: a shot taken on the first side of the street that was too wide (why is there like this guy hiding in front of the booth with his phone), but when cropped in a little seems to work ok (the guy on his phone now appears more like a bystander). 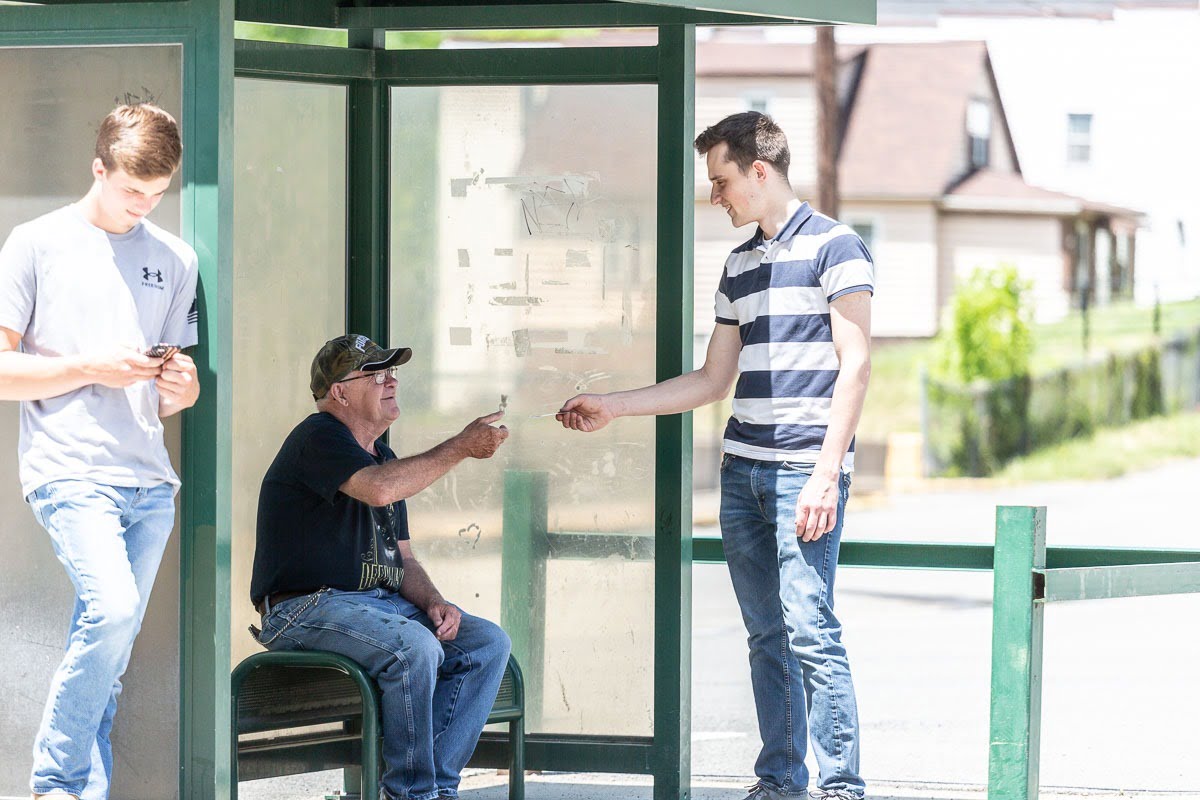 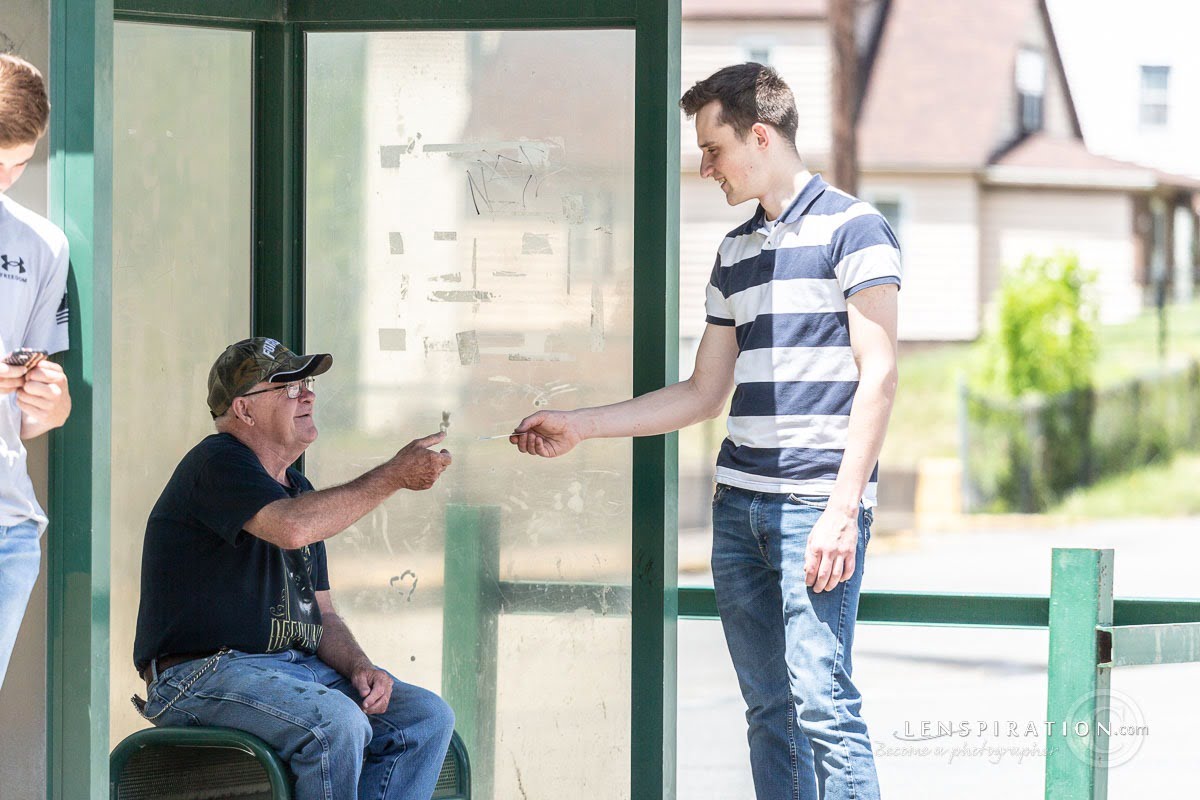 I took a lot of shots for that one good one, haha.

However, the not-so-great-location forced me to get in close. And I’m glad I got a close-up shot of someone handing out a tract! No-model releases needed in this shot! It should sell well on stock. 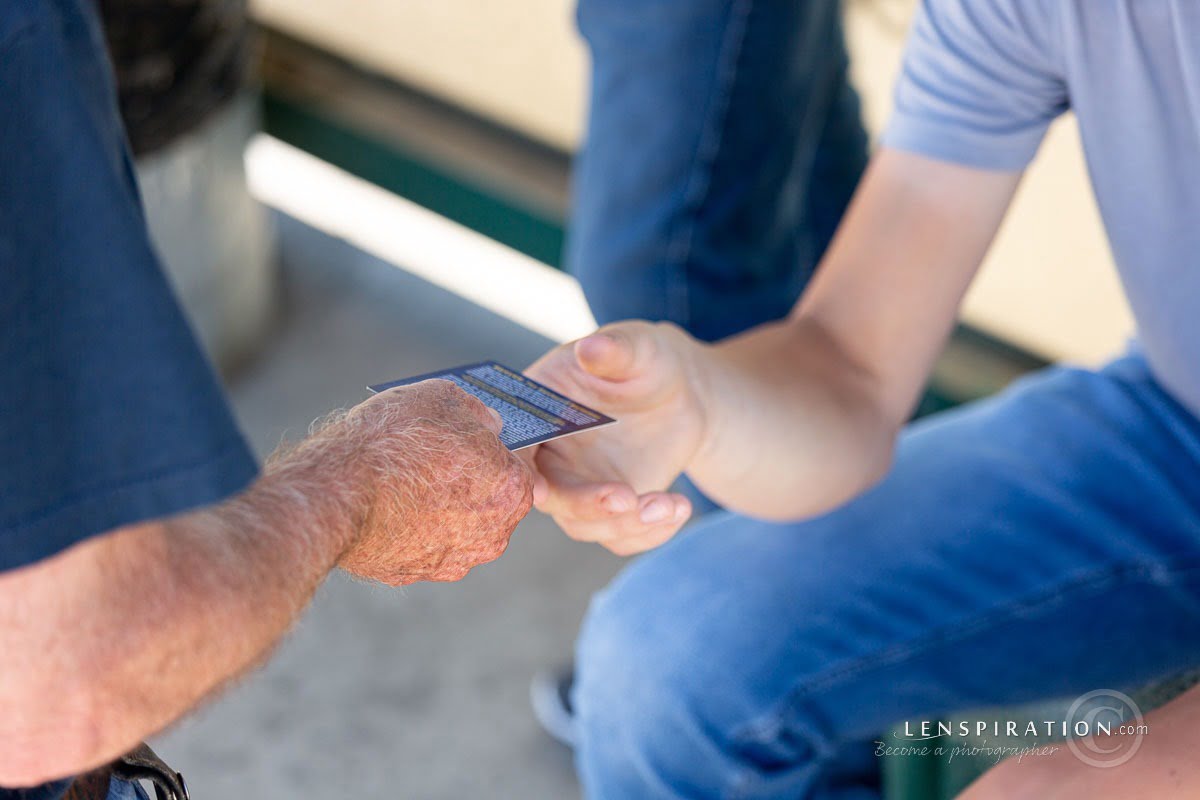 (Again, a lot of shots behind that good one.

Wow, I thought the better I got at photography, the fewer photos I would take. Maybe I’m out of practice.

We then moved on to the location that I thought would be best from the very beginning. I remembered seeing that bench before there in downtown Salem, and I could just envision this exact shot. 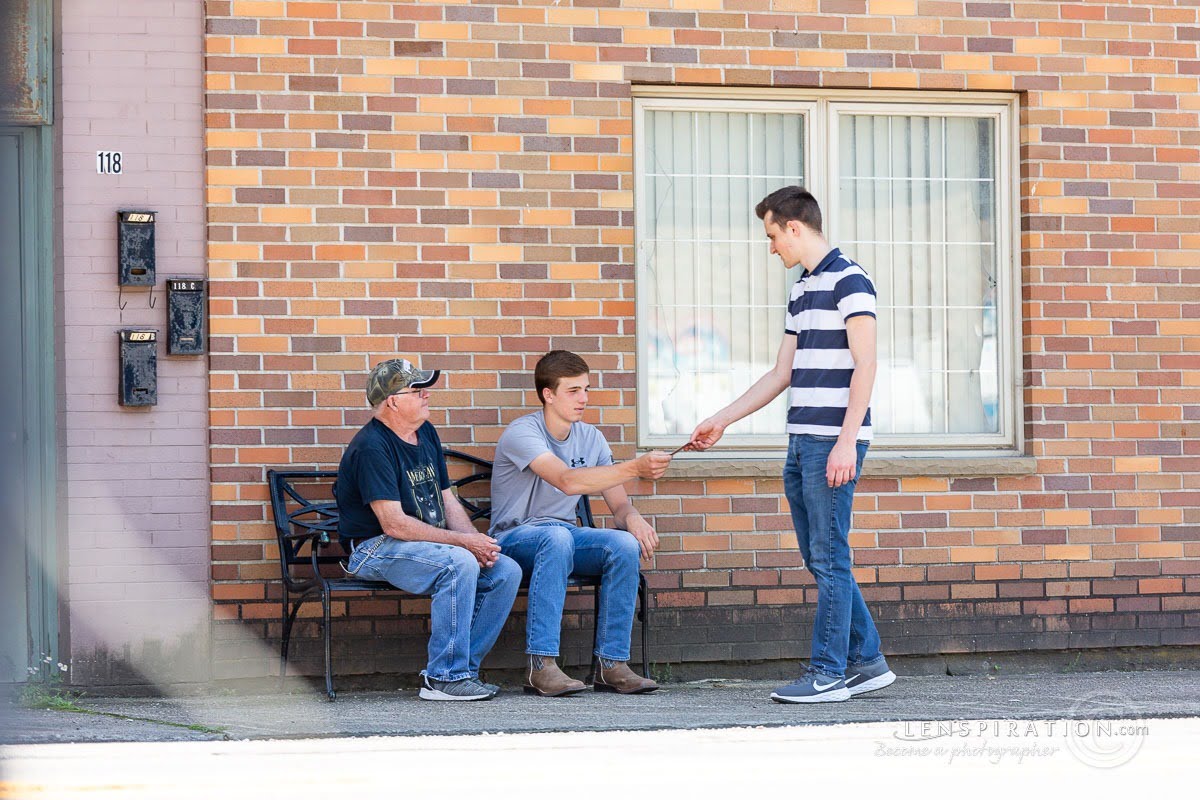 Then we went to what turned out to be our final location. I kept my distance so I could zoom in as much as I could to get the background as blurry as I could. If you’re using a point and shoot camera, you’ll want to be sure to know when you’ve reached the limits of your optical zoom. Photos generally keep their quality when optics are being used to zoom in on your subject. When the point and shoot camera switches to digital zoom, however, you’re really doing nothing more than cropping your photo, like you would do on a computer. The camera should indicate this somehow. On this Canon Elf you’ll see it switching from optical to digital zoom when it reaches the point where the bar turns blue. That point was also when the lens stopped physically moving outward. 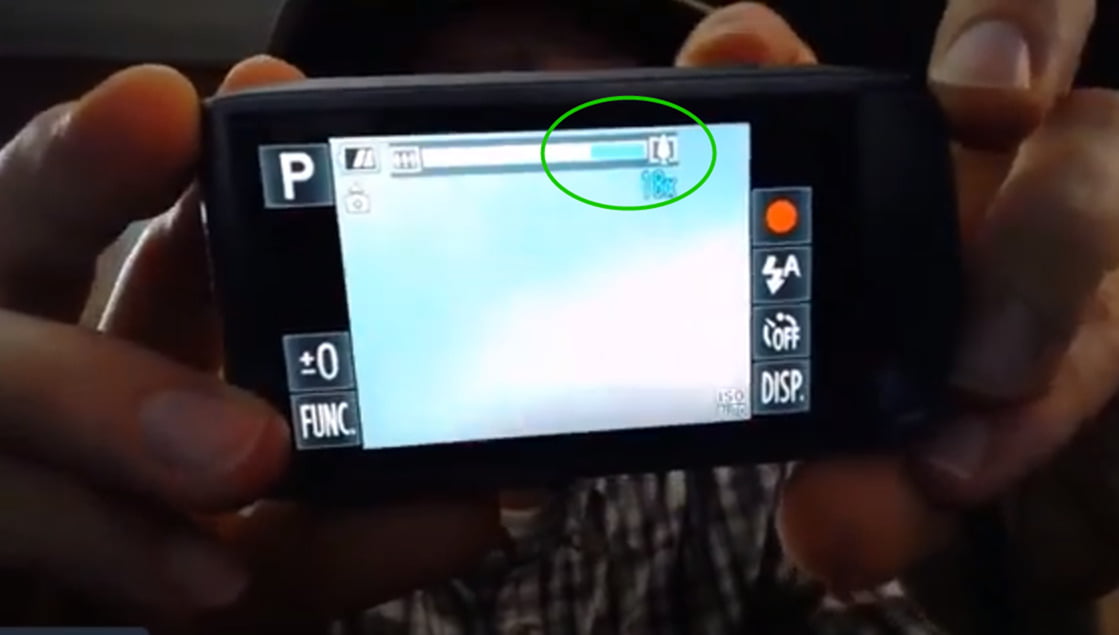 My models weren’t quite dressed for very realistic “back ally” shots, but I do think this one shot turned out well.

(Of a whole lot more shots this time. Oh dear!)

A second shot from this lot I would absolutely love if the expressions were better. Look at the following shot. It’s authentic! It’s genuine. It’s a candid. 4 guys out on the street just chatting. One of them could be a guy sharing the Gospel naturally with complete strangers (except that you can’t not tell that Jonathan and David are brothers lol). 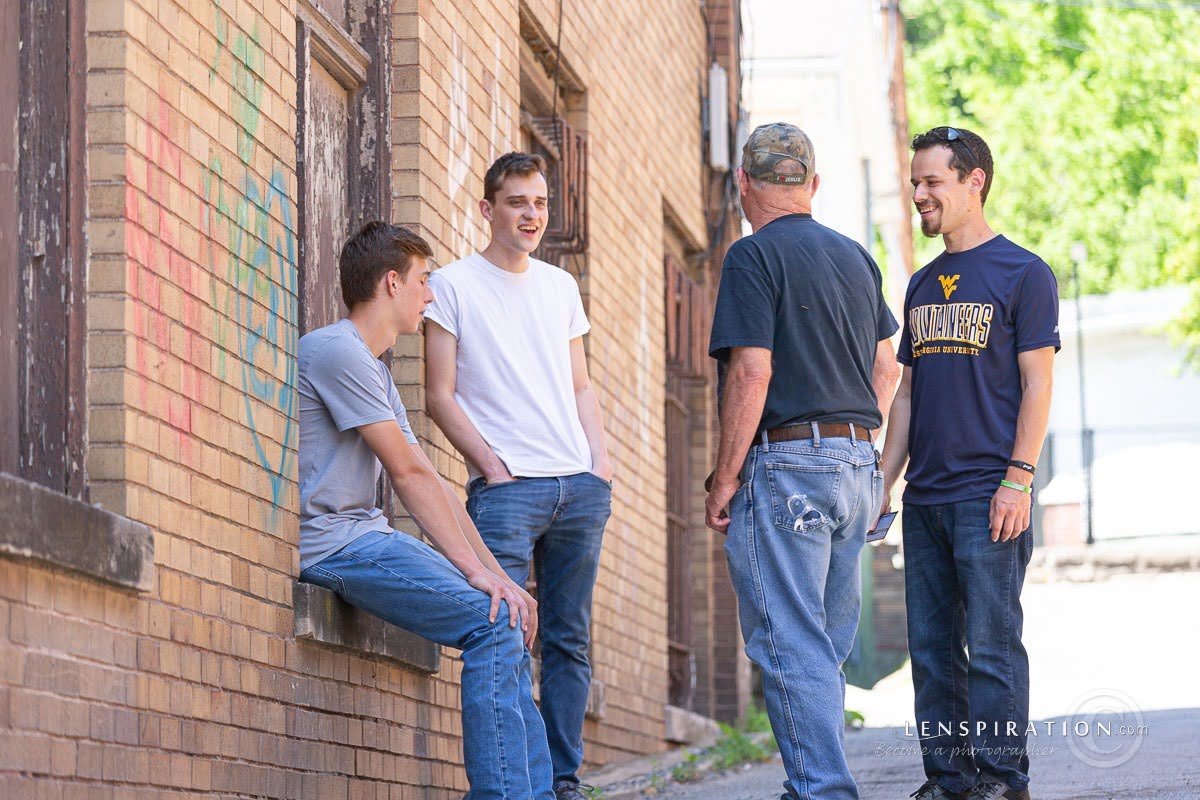 But not every shot works. And that’s fine! I won’t have any shots if I didn’t at least try. So, now it’s your turn to go out and try!

Plan ahead. Ask some folks if they wouldn’t mind helping you out. And when you’re all together, go have some fun with it! If you try looking around online for witnessing-related stock photos, there are precious few. I say that from experience. There’s a real need for Sharing the Gospel photos!