I had such a great time with this assignment! At first, I didn’t know how I was going to do it. I wasn’t even sure if I could do it! But approaching it one step at a time, and solving one problem at a time, I was neat to see how it all come together. This assignment, Wisemen Silhouettes, is going to be a challenge, but let me show you how I did it!

For reference, this is the photo that the publisher gave us to replicate (or to come up with a similar, creative alternative): 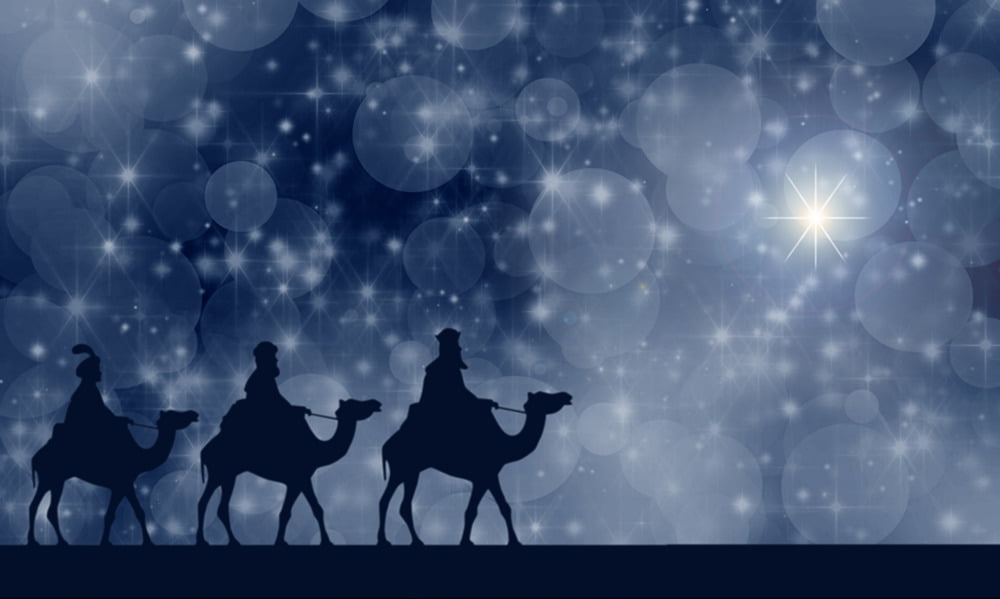 There are several things in the video I’d like to show you how they looked from the perspective of the camera . . .

In and of itself, silhouettes against a white background are beautiful: 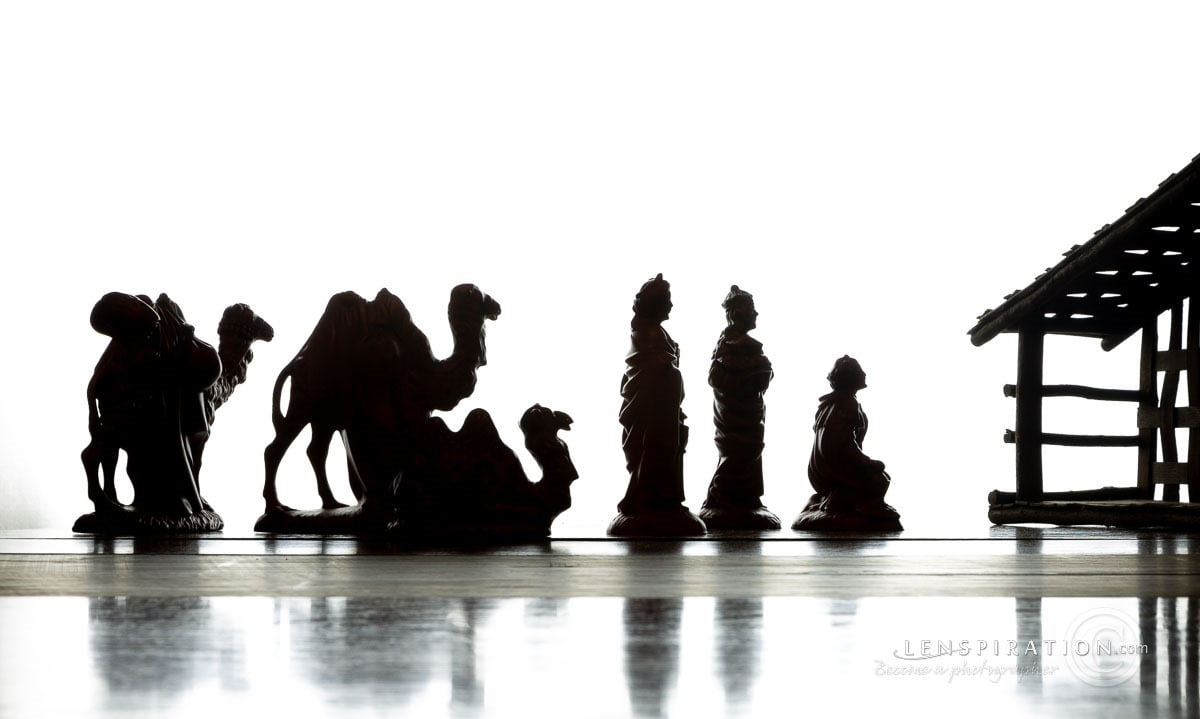 But as you can see, the reflections on the table are distracting.

So, adding the black table cloth really made a big difference! 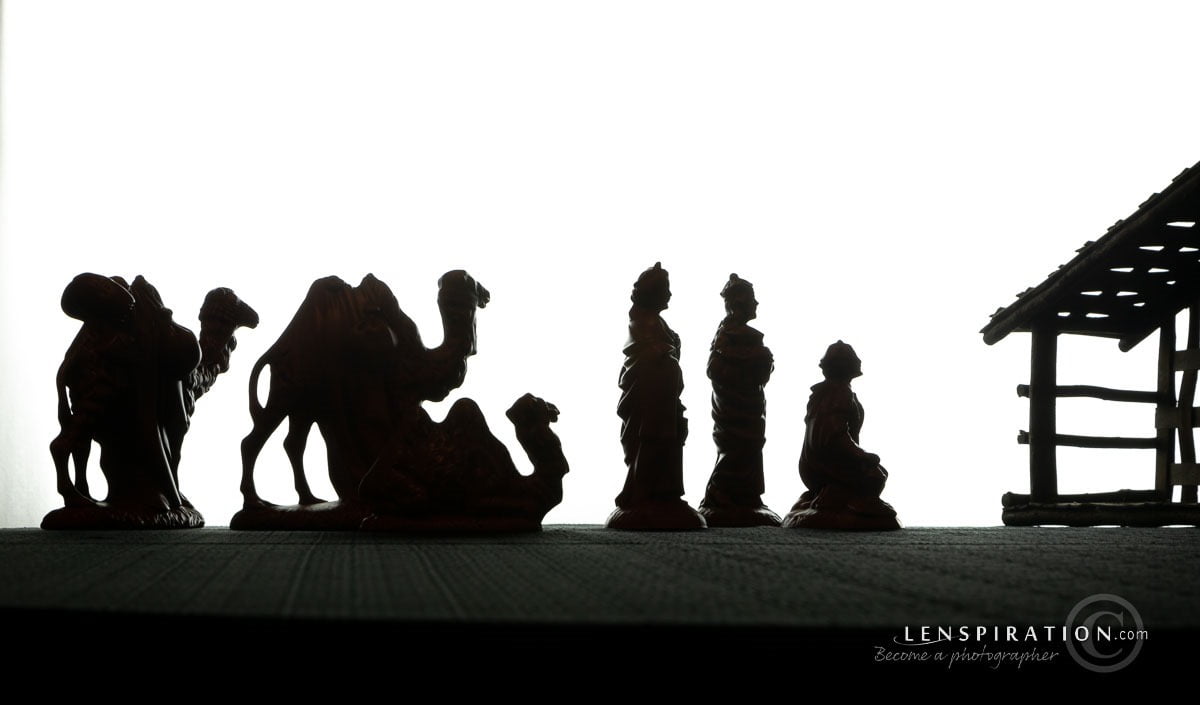 The dark foreground really helps keep the attention where it needs to be in the photo.

I actually really liked the background texture and color in my prototype foam board: 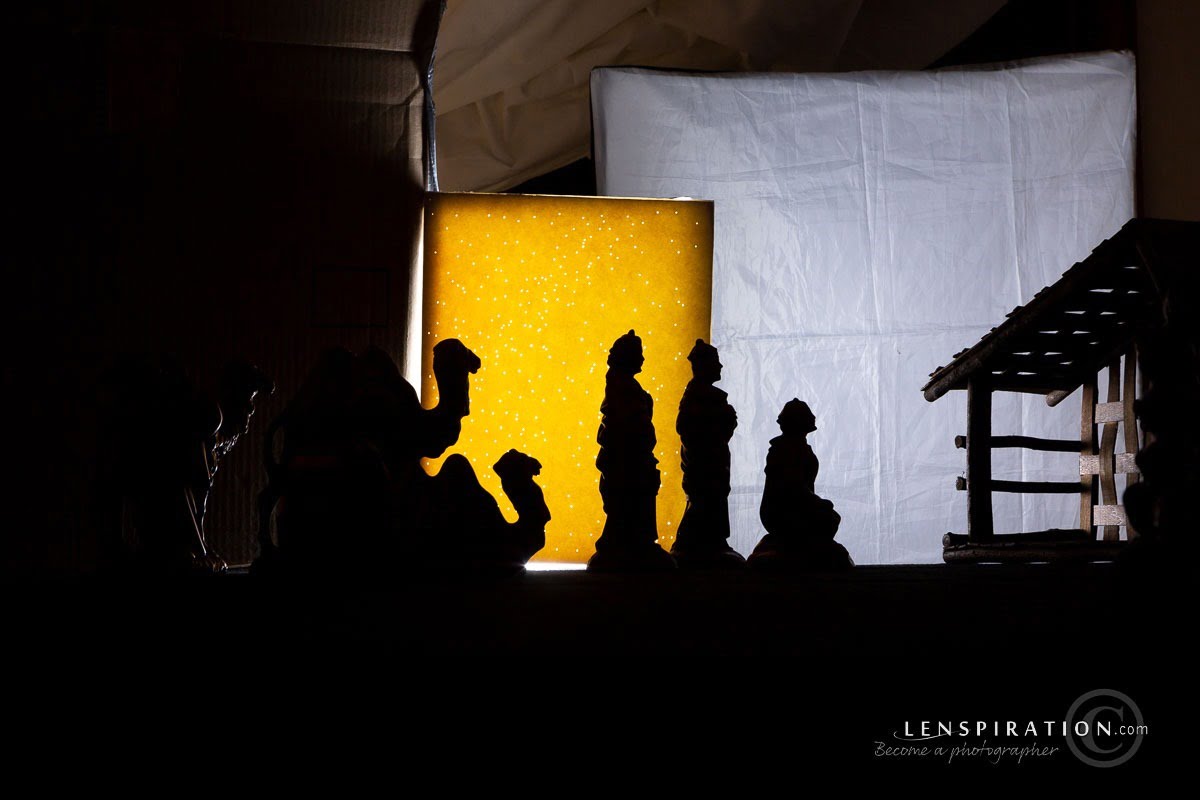 If I had had more time, I think I would have tried something with a bigger piece of foam board. The stars look more like stars, and the “parchment” texture adds an artistic touch.

When it came to the red plastic table covering, you can see there was some interesting banding going on. I think it’s something that could be taken out in post though, if needed. 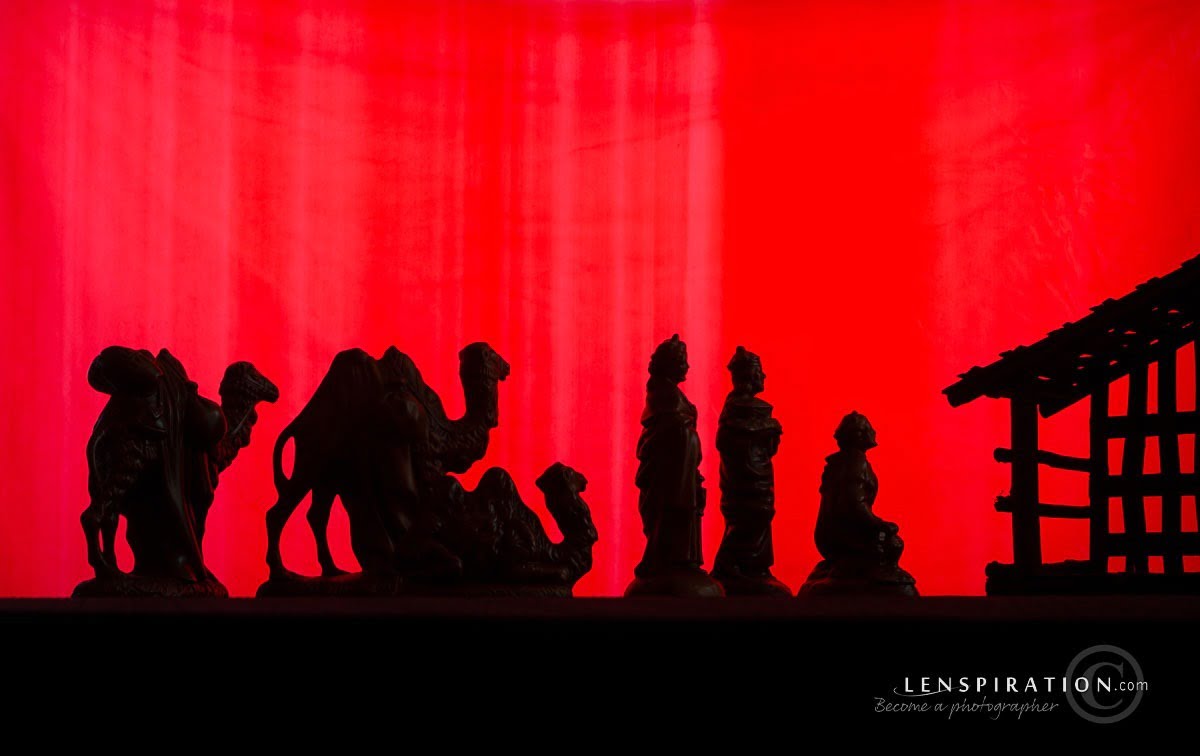 The old poncho turned out to work pretty well. This is what it looked like before putting it in the dryer. 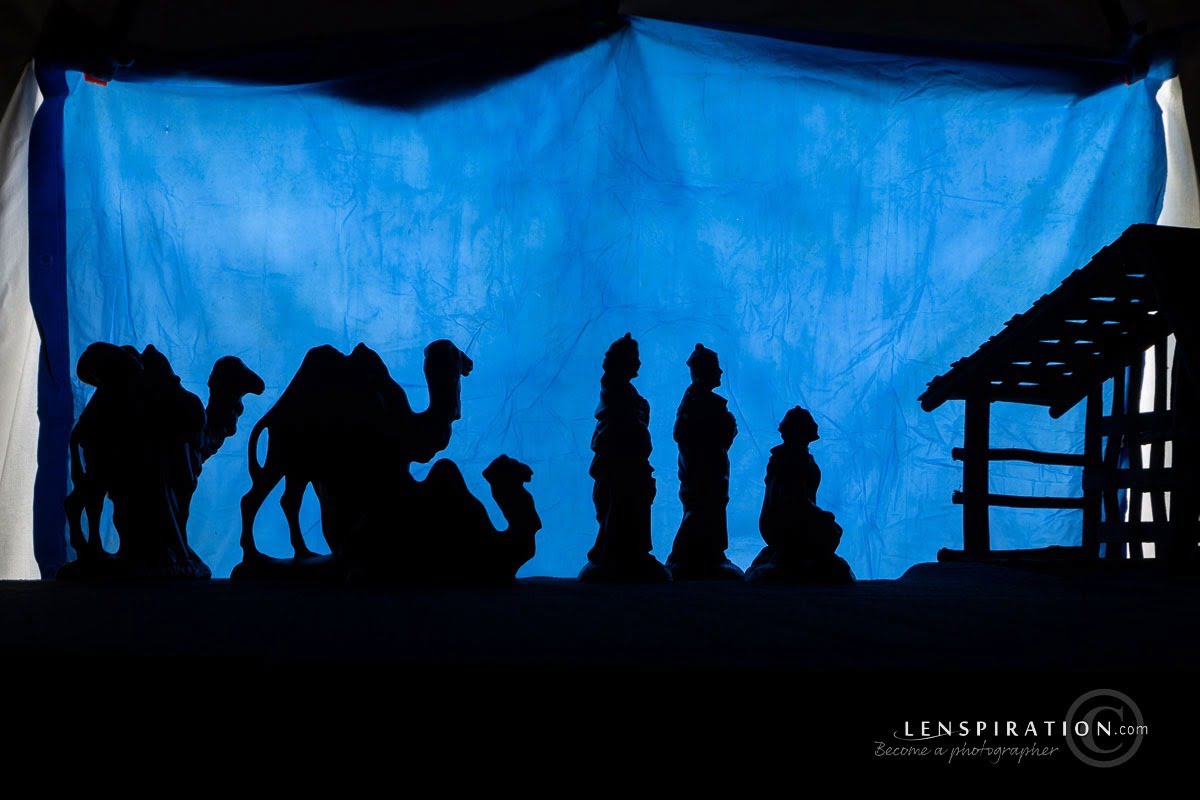 But even with most of the wrinkles taken care of, there was still uneven texturing especially where the two softboxes came together. 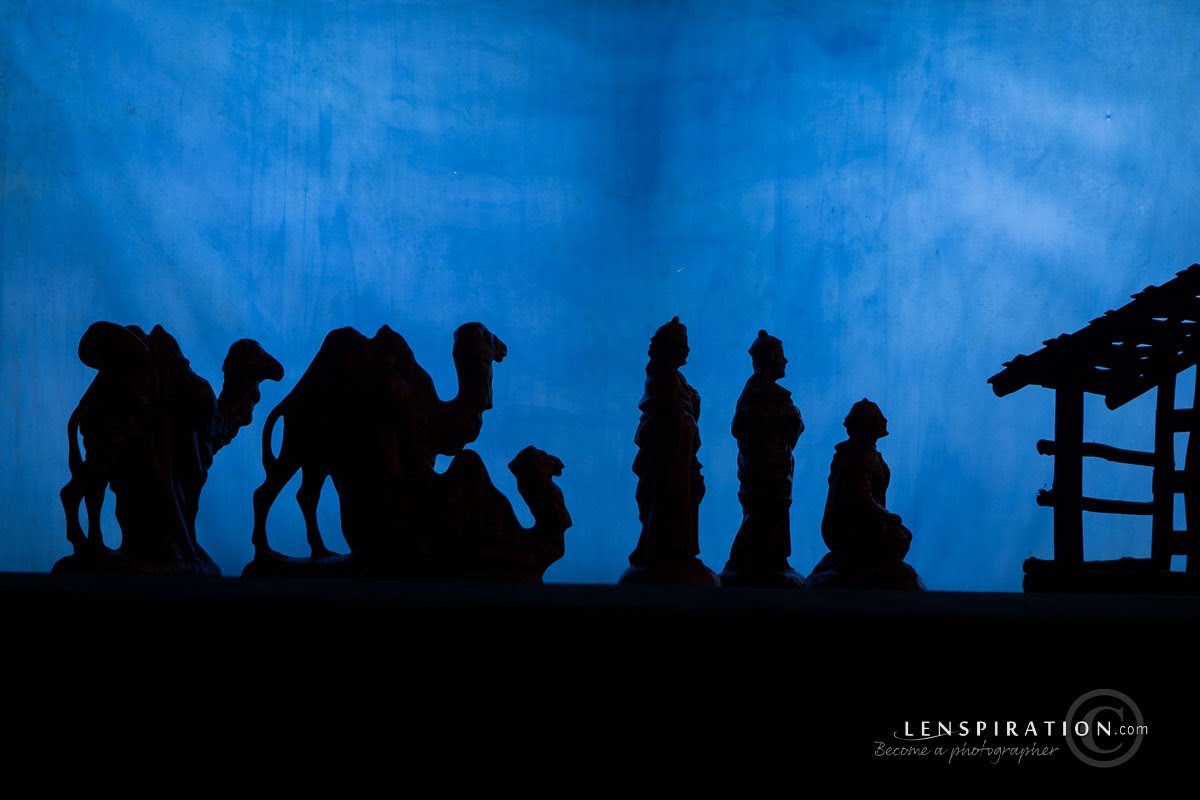 I had to really think about this one for a while. I tried several things to get rid of the uneven texturing to no avail. But that’s how I discovered the need to separate the blue background from the lights. It fixed the problem right away! 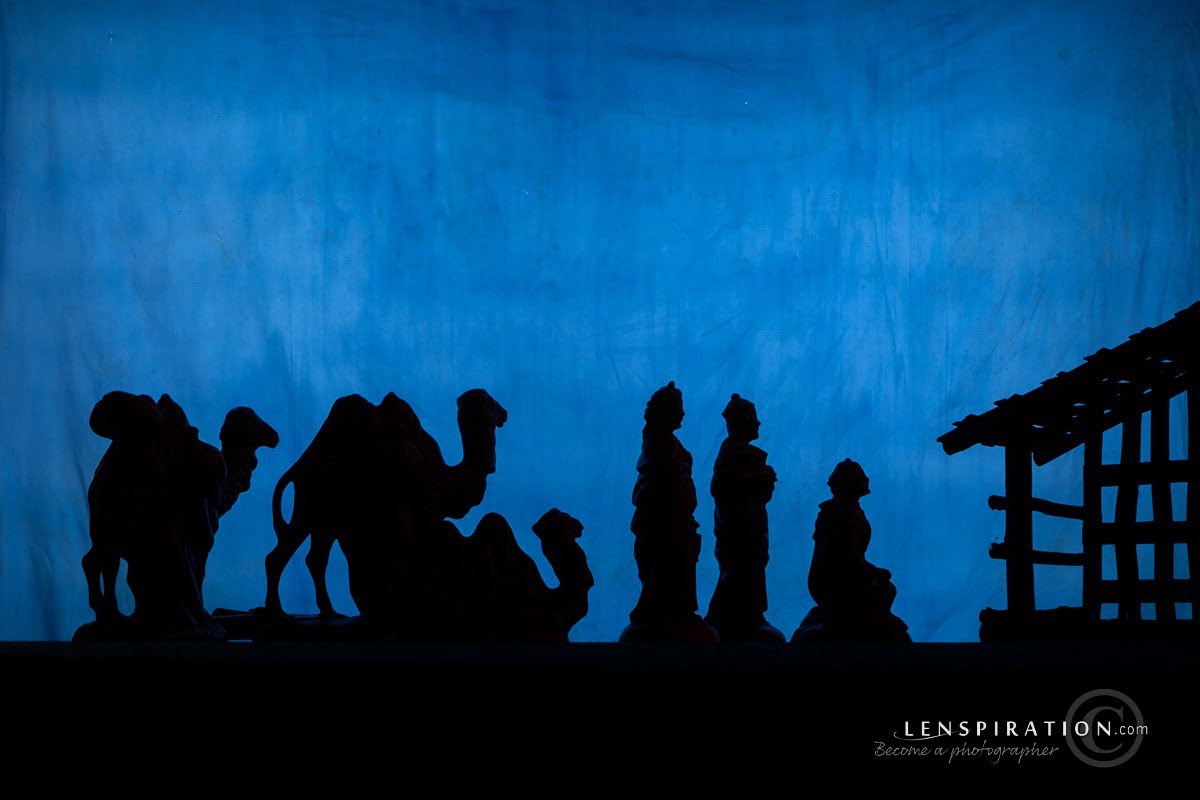 Then I had to get it perfectly flat. It was kinda fun rigging up that second stand. A broom stick worked well. And some tape. 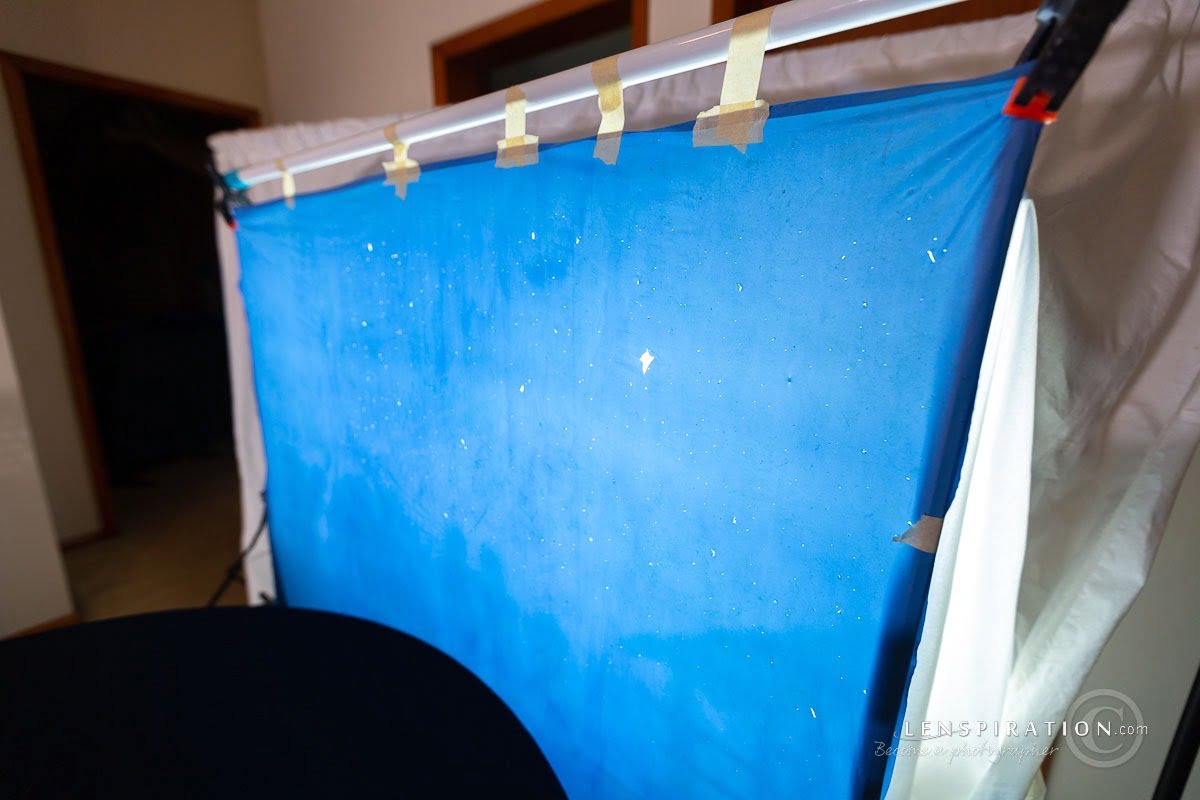 I learned some things playing around with the flashlight too. It’s interesting how the camera picks things up differently than our eyes see it. Wiggling the flashlight back and forth during the exposure also helps to soften harsh edges. 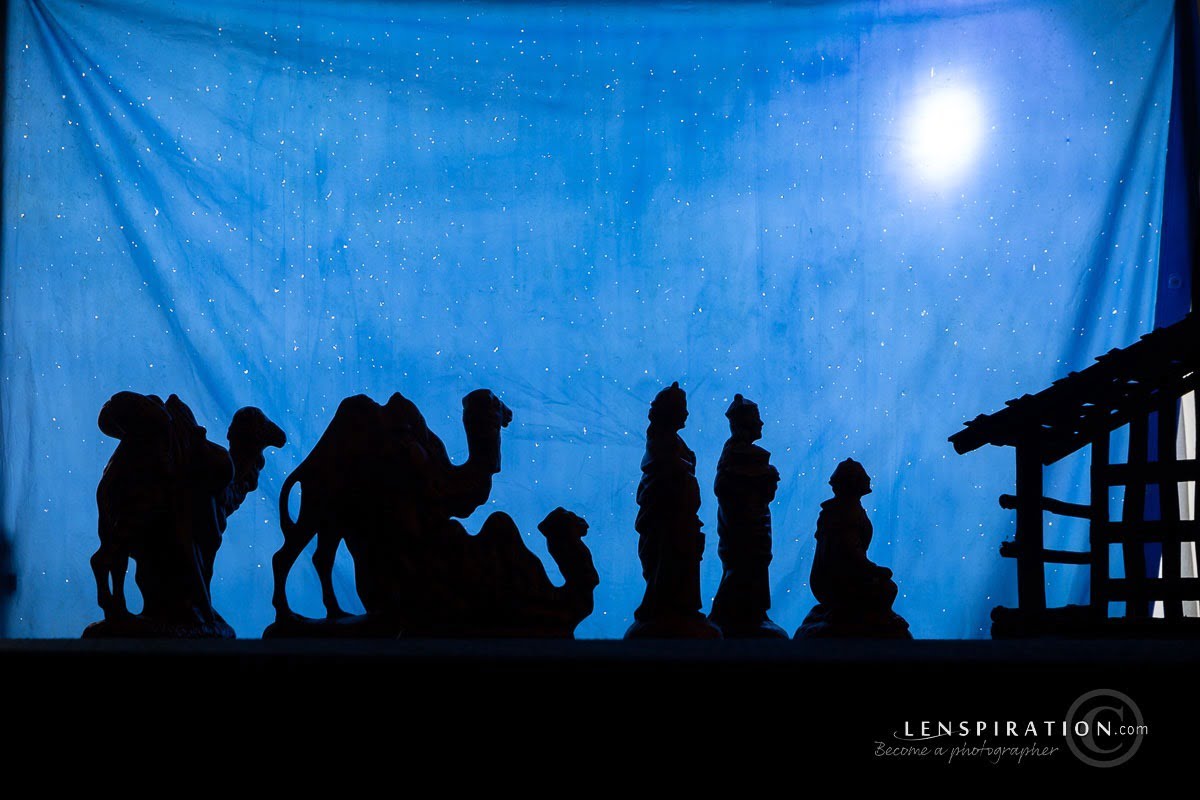 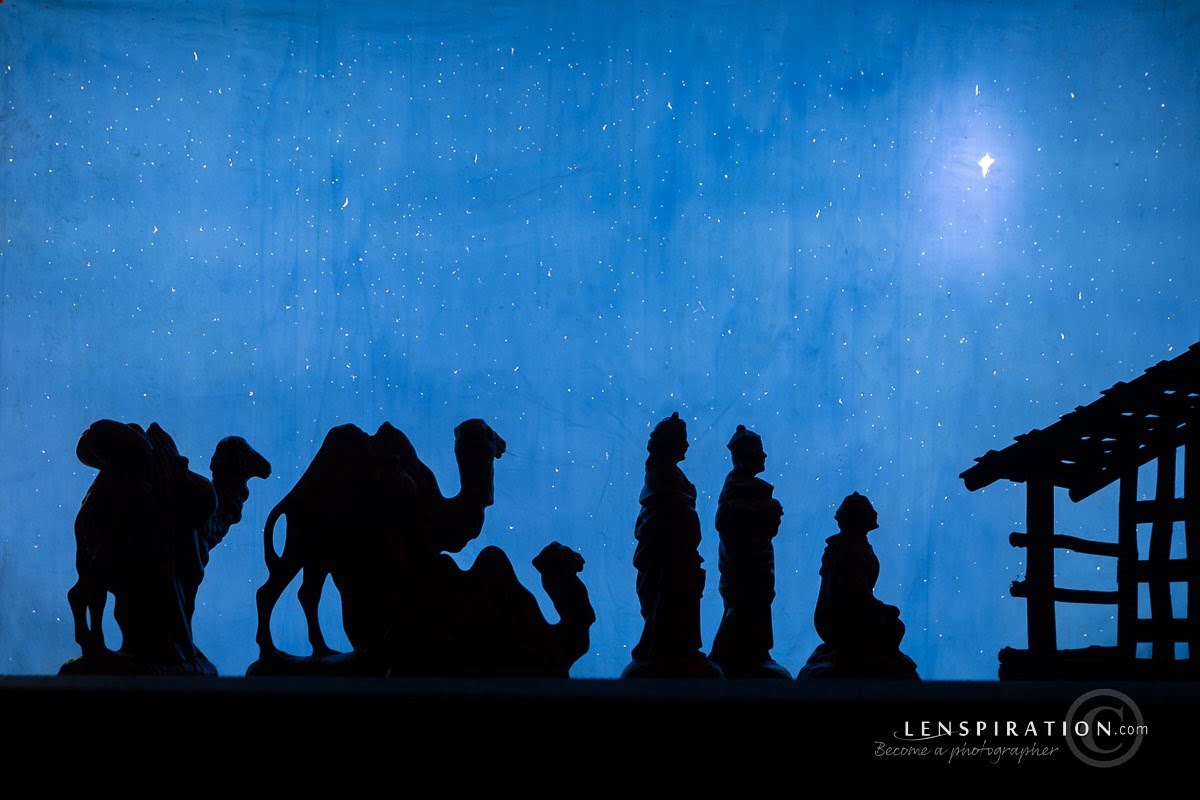 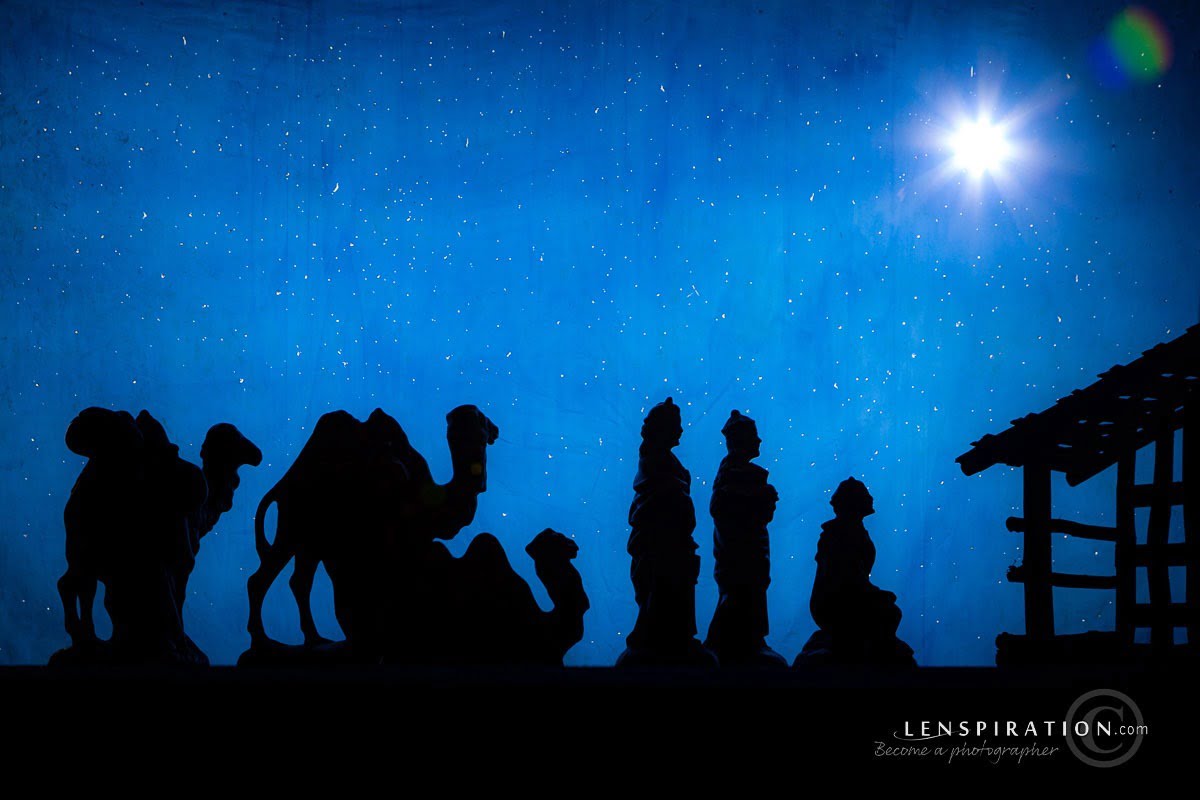 When I saw that photo come up on the back screen, I knew I had accomplished what I was going for.

Removing the UV filter was the last thing I needed to do. With only very basic adjustments in Lightroom, here is my final photo! 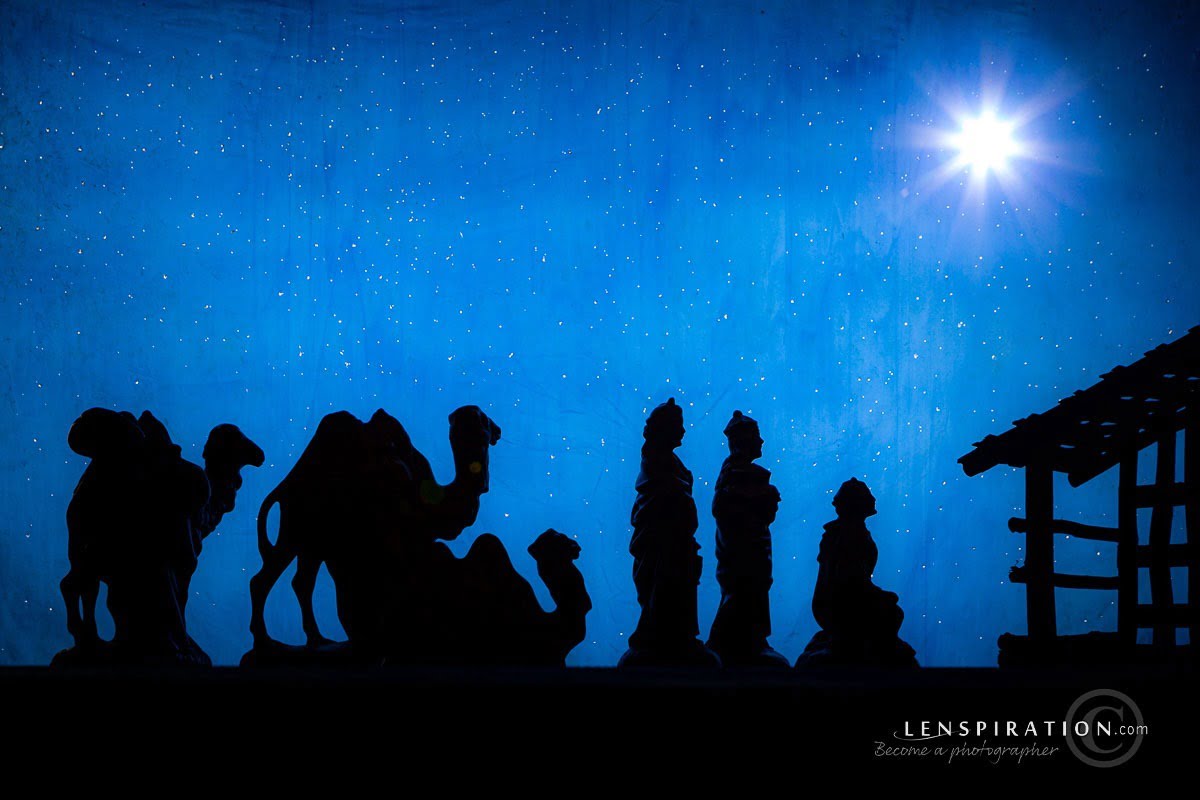 In retrospect, there are some things I would do differently. I would add some bigger stars, and more stars, especially at the top. There is also the shadow of my arm holding the flashlight in the top right corner of the photo. The poncho had some unremovable stains on it, and is not perfectly smooth either, so the background texture overall is un-sky-like. But for these sort of things, I think I’ll just play my “artistic license” card.

But now it’s your turn! Discover what sort of things you’ll learn by duplicating exactly what I did, or come up with your own creative way of replicating the artwork that the publisher sent. The Wisemen Silhouettes challenge is now yours to conquer!