As I was preparing for this month’s Lenspiration Shoot to Serve Photo Assignment, Christian from Christian Family Reformation introduced me to this idea of a new kind of photography I hadn’t really tried doing professionally before: Family Photojournalism. Why not professionally, artistically, document the fun and happy moments you have together as a family? Maybe you guys already do this. But most of the family pictures I take are selfies and cell phone photos. They are easiest to take and deliver. Shoot it, share it, done. But for ministries like CFR who desperately need authentic photos of families doing things together, why not approach it intentionally and professionally?

So, I got together with another West Virginia homeschool family and we went to town making and photographing Family Moments Together!

I always learn so much from each one of my photo shoots. Especially when photographing people! It’s tough. But here are some thoughts in retrospect on my photo shoot that I hope will help you with yours.

I took a lot of photos.

I am generally quite selective when taking photos. I try to get everything as perfect as I can before releasing the shutter. But when working with people, and many different kinds of elements that I have no control over, I find it takes a lot more photos to get a good shot. It’s literally hit and miss. Take this sequence for instance.

A burst of 6 shots to capture the moment of the hoped-to-be split log. I didn’t set anything up here. This is just where the people happened to be situated, so I had moved myself into this position. But it’s a great angle and the people are spaced very nicely. The first one is great. But the ax is very high in the air. The second is best, even though the running position of the young person on the very far left was ever-so-slightly better in the first photo. The third or fourth photos could have been epic if the log had actually split in half. But it didn’t. I had no control over that. 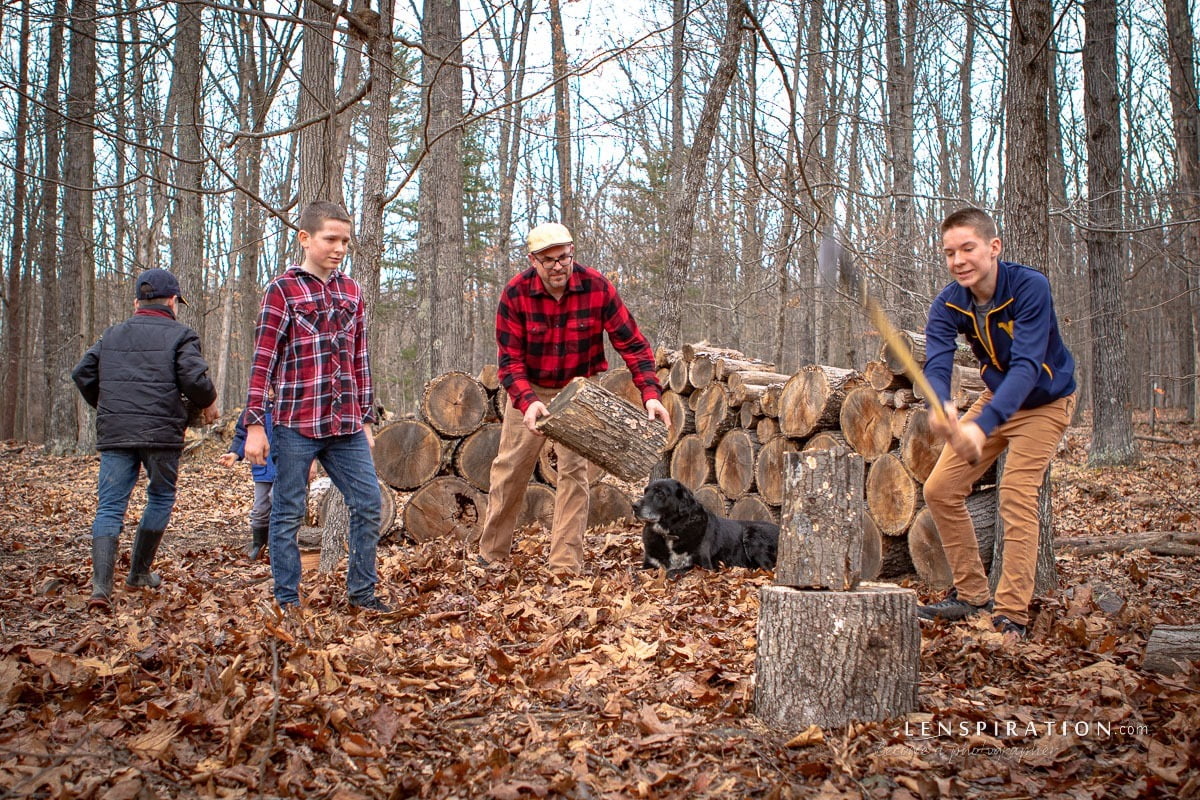 During the burst, things move ever so slightly. Expressions on people’s faces, the log being thrown down by the dad. The juxtaposition of the running guy to the standing guy on the left. It just so happened that the second picture was best. But I had no control of the elements between each frame, so snapping bursts became necessary. Even though in my perfectionist brain I want only to release the shutter once for this scene to get that 1 good photo, it is really only achievable with a bust of shots.

Yes, I took a lot of photos. And you will only see the best one.

Here’s another sequence. Not burst mode this time, just trying to capture a candid moment. This arrangement I did set up.

And I told folks to do different things as I snapped different photos. But I still wanted that candid flare. And I couldn’t control where the smoke would blow. And I didn’t tell them when to take a bit of cookie. If they were thinking “do I take another bite? No, James hasn’t told me to yet.” then it becomes micro managing. (If you’re good at that, go ahead and do it!) But how do I do that with 5 people? So, it really was hit and miss. And I just took lots and lots of photos!

And thankfully, from that second series, there was one really great one that I liked a lot! (Though, of course, I do wish the little boy in blue wasn’t looking at the camera, and….well, a perfectionist’s wish list is never satisfied. 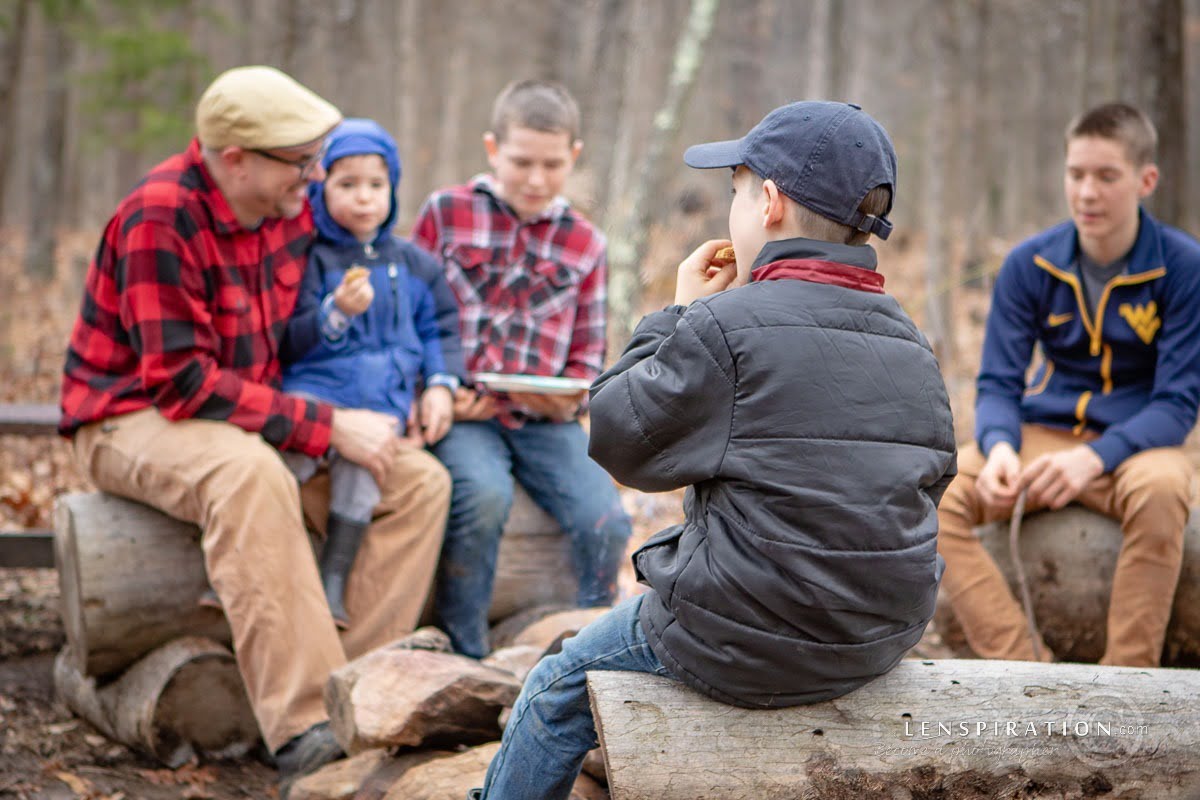 Preparing the models ahead of time.

I’m really glad I emphasized that everyone try to keep smiling all the time for the outside shoot. It doesn’t look fake in the photo does it? 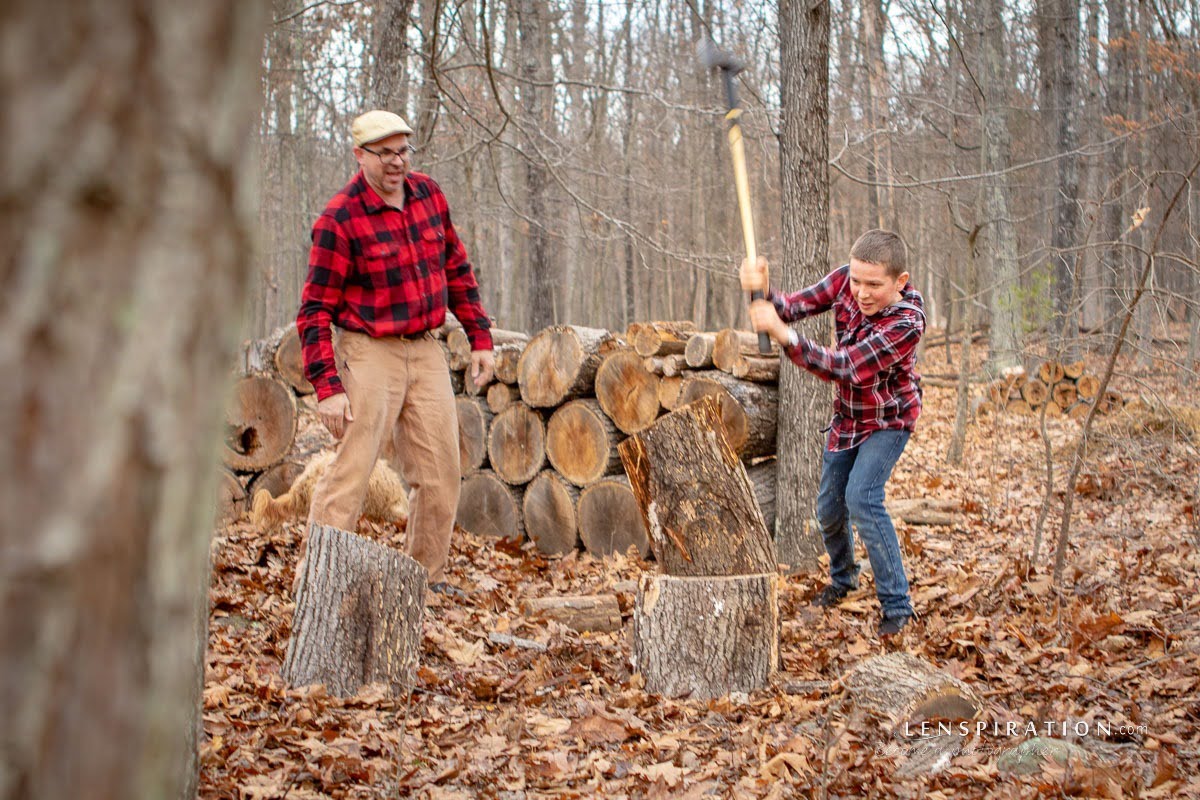 But in a picture where it’s not clear that anyone is smiling, it don’t really fulfill the assignment, regardless of how great it may be and how much I love it. 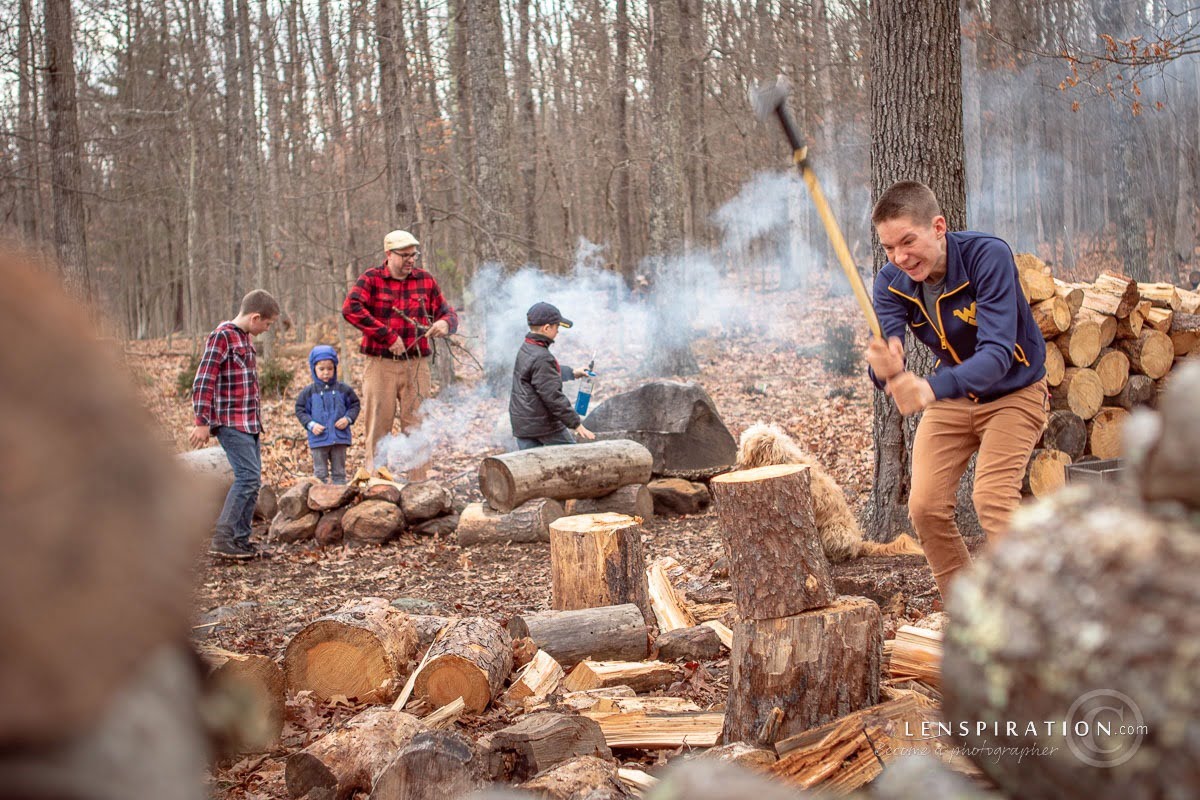 In addition to “keep smiling”, another thing that I’m glad came across well, without necessarily ever saying so explicitly, was “focus on your interaction with each other, and you can kinda forget about me, the photographer.” This helped reduce the amount of photos with people looking directly at the camera, which doesn’t have that candid feeling I’m going for. 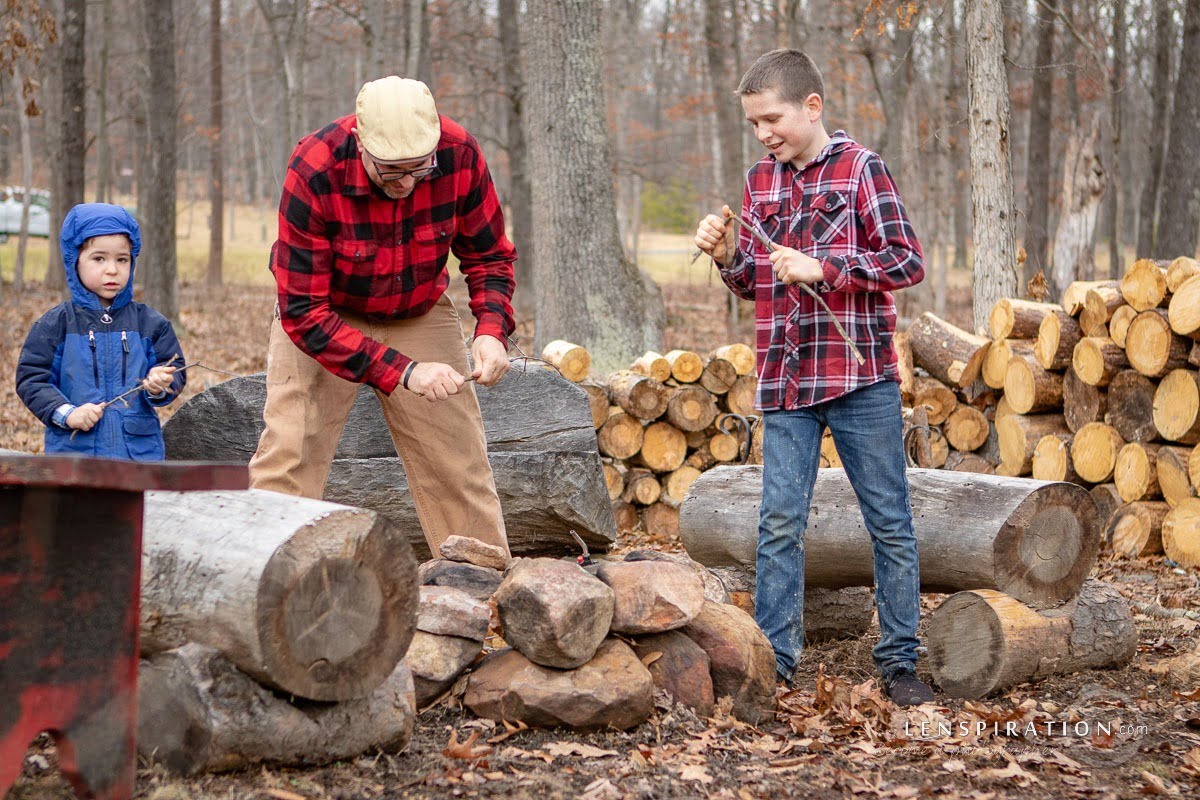 In retrospect, I’m really glad we did three locations. The inside shots are great! But there’s something that I’m failing to accomplish. Can you pick up on what it is? 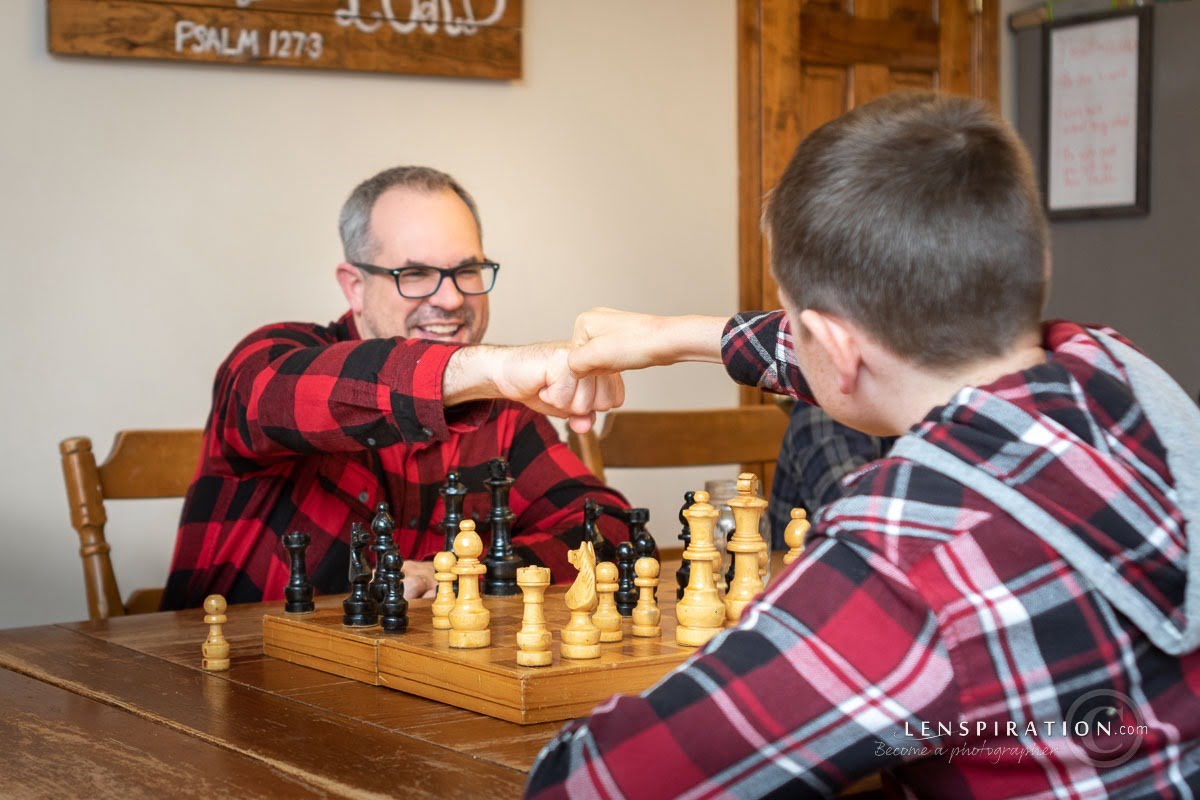 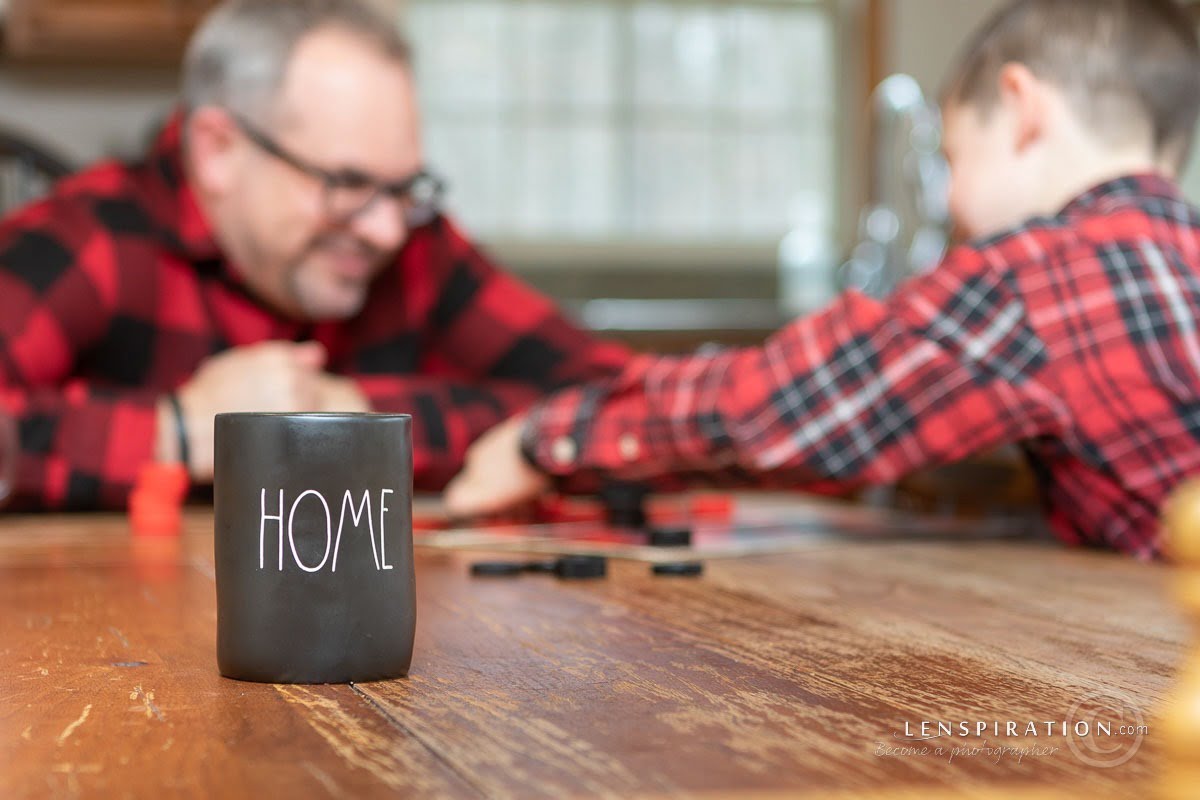 I’m not actually fulfilling the assignment! There were lots of people in the room, and there was this exciting, family-fun atmosphere there in person. But I wasn’t communicating that to the viewer. They were great activities, but I was having a hard time figuring out how to include more than two people in an artistic photo. Of course, I had the extra challenge of mom and all the daughters not being involved in the photo shoot because of an event they were attending that day, but it was good to shoot in multiple locations so I would have a higher chance of coming away with good photos even if one of the locations wasn’t ideal.

Having said that, I did get a couple shots that hint at there being more than just two people in the room. 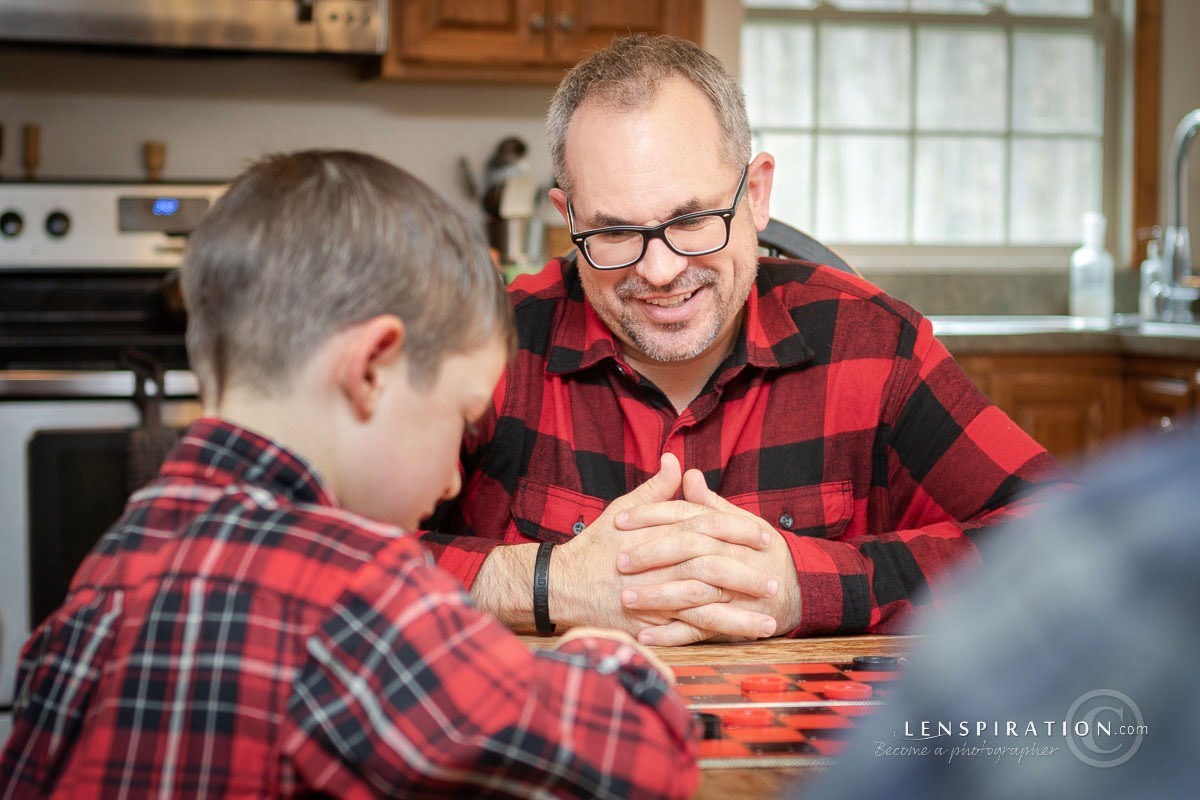 And if it was raining outside, then I’m sure I would have thought of other ways to rearrange things to achieve that feeling of family moments together better.

Thankfully, this assignment gives us lots of leeway for variety and creative ideas! We’re not stuck with very many restrictions. Next time your family is together doing something fun, pull out your camera and start snapping! It’s your turn to shoot this month’s Photo Assignment, Family Moments Together.