When it comes to a real-life photo assignment, it doesn’t get much better than Raw Ingredients! A small, family-owned business, looking for clean, bright, stock-like photos of just about anything! Lots of ingredients are used in Oil of Joy Apothecary’s myriad of products. Just pick an ingredient, and run with it! I had no idea I would be taking pictures of the things that I actually ended up shooting . . .

I walked into the store with the intention of buying only cinnamon, cloves, and ginger. In one sense, they are indeed “raw ingredients”. But they just didn’t feel very “raw” to me. So I walked through the fresh produce section to just see what kind of things might pop out to me as a potential backup. And that’s when I saw the limes and lemons. I checked on Sarah’s website, and sure enough, there were some products that had lime or lemon as an ingredient. So I went ahead and picked some up. I could use them for more than just a photo shoot anyway.

Well, when I got home, the light was streaming nicely through the backyard on the green lawn. And oh! what a beautiful day it was. Perfect for an outdoor shoot! But spices, against a neon green background? Lemons seem to be a better fit to me . . . I could see the juxtaposed colors already! 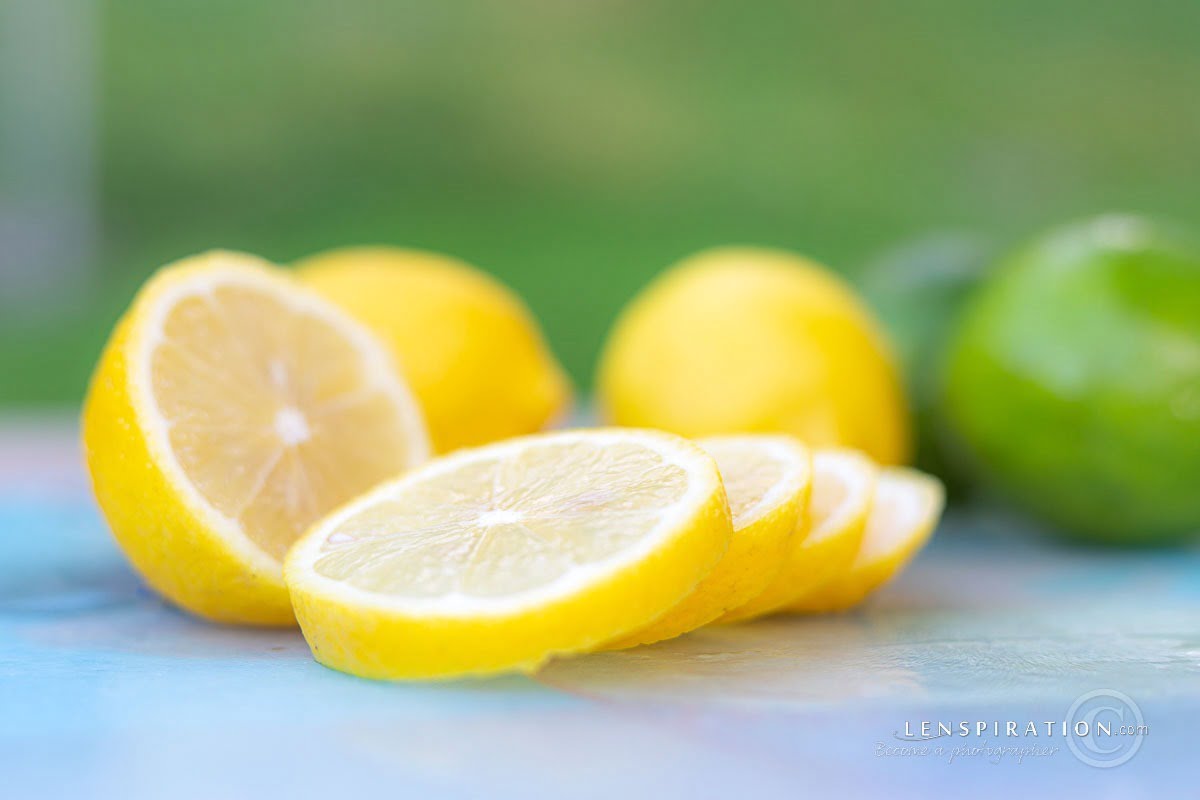 I was having a grand time! But I’m not sure if I can do anything “real quick.” By the time I had a setup I liked, the beautiful light was gone!

At that point, I could have switched back to Plan A. But everything was set up, so I just finished shooting what I had out and put it on my calendar to continue on at a later time. 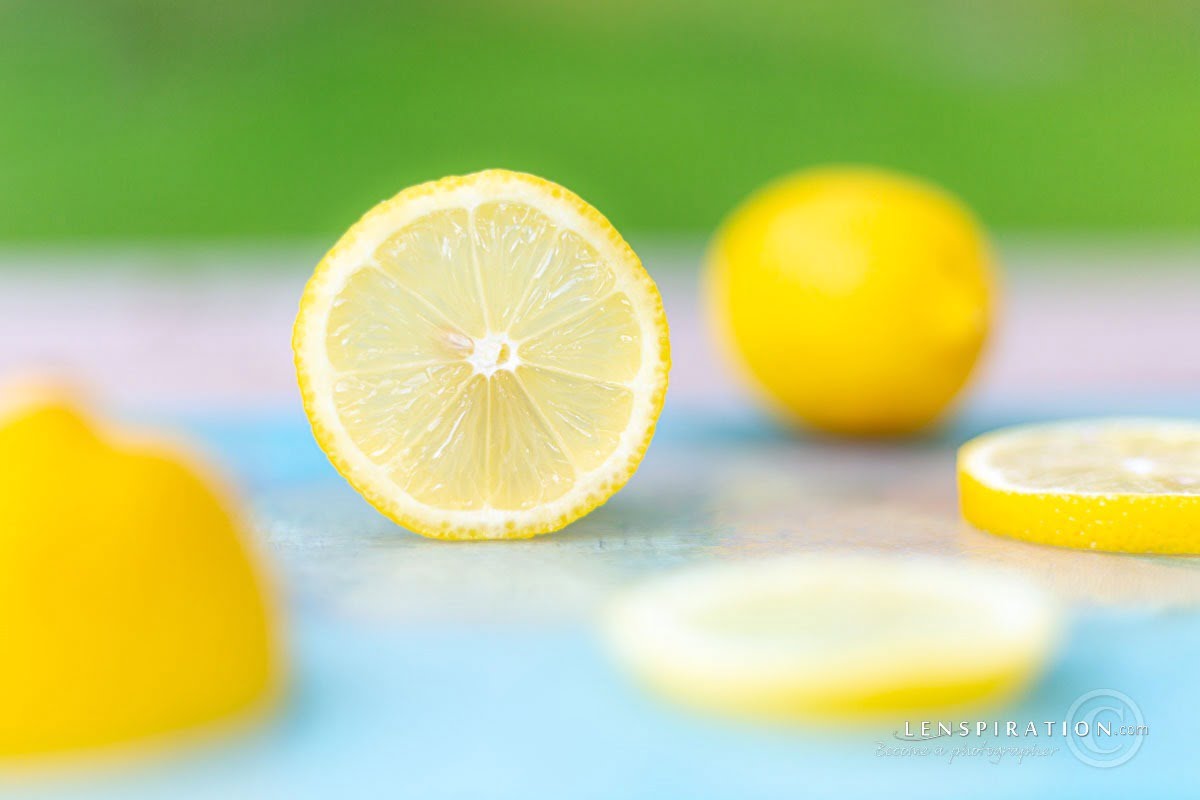 Though my outdoor photos didn’t have the bright, glowing look like I was initially hoping for, I still absolutely love the natural color combinations. That iridescent green, vibrant orange, and fantastic aquamarine! Oh, I’m so glad God made colorful things.

But I knew I didn’t have enough photos for this assignment. There was more shooting to do.

So, soon after, I got the camera out again. And again I had the same choice to make. Do I shoot the cinnamon, cloves, and ginger, or do I finish photographing the citrus “real quick”?

Fresh things go bad. Spices last forever. Right? “Let’s finish up the lemons and limes.” I had already started, so why not finish them up before diving into the real stuff.

I can’t believe how many variations one can come up with for arranging limes and lemons!

The day I decided to come back to shooting, it was cold outside so I threw together a makeshift “studio” on a small table in the office. I pulled out the cutting board again and flipped it over. It was perfectly white on the under side. I put the camera (with a 50mm prime lens) on a tripod and pointed it straight down. Then, I pulled out two lights and set them up as close to the table as possible, placing pieces of white cardboard opposite the direction of the light sources to act as reflectors.

Pulling up a bunch of stock photos for reference, I started with some simple ideas first. 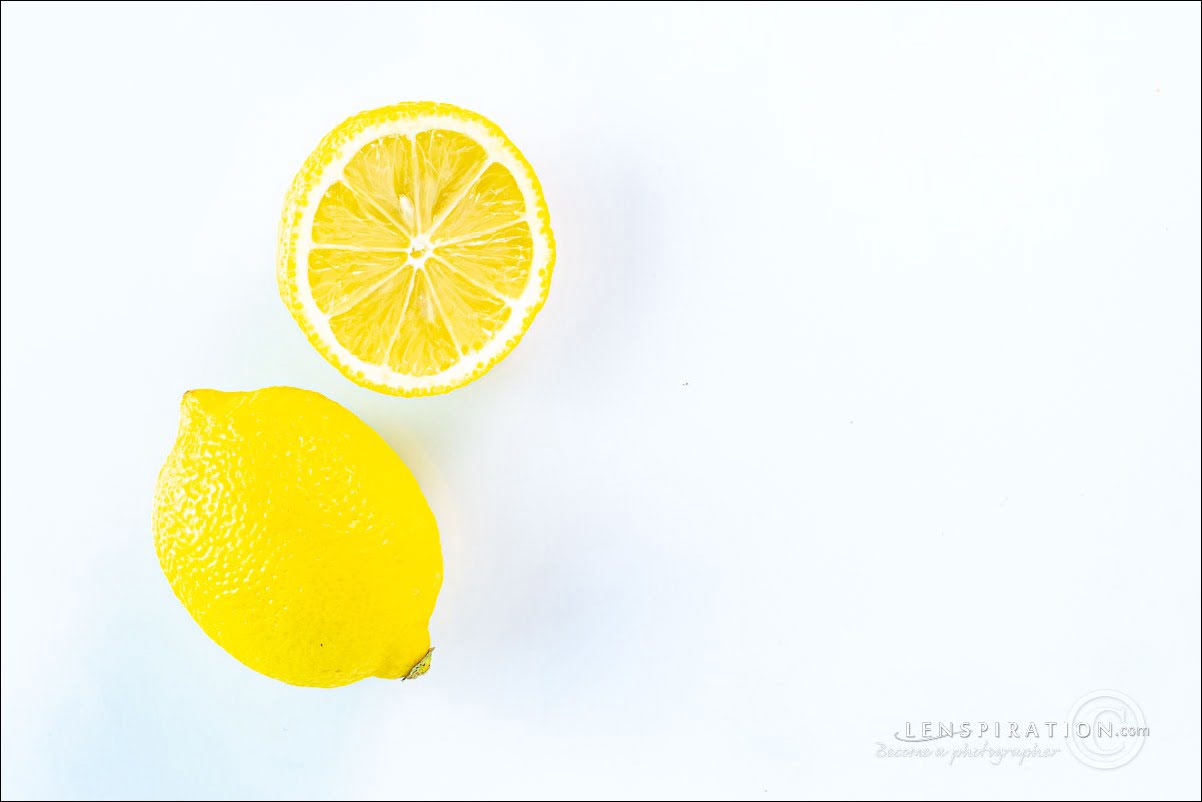 Simple, yeah. But, too simple.

Much better. Lots of white space. A pleasing simplicity. Applying the rule of odds. 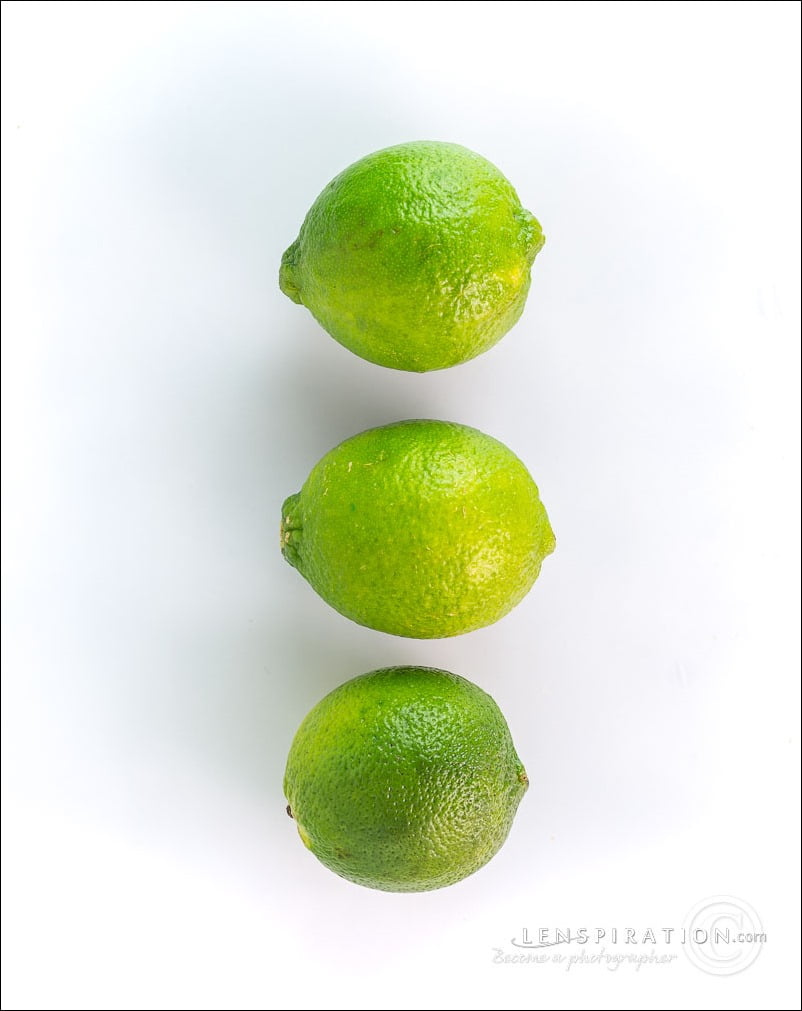 Must of had “rule of odds” floating around in my head. Just love the soft shadows! 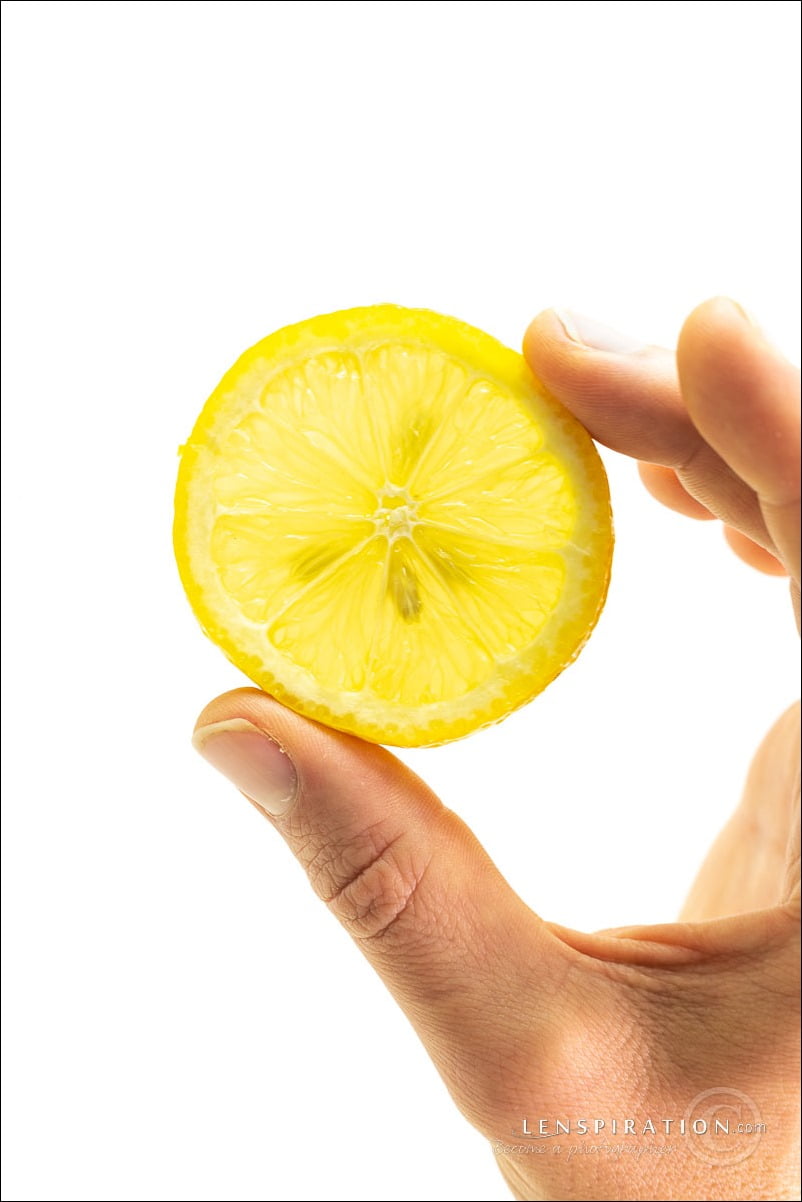 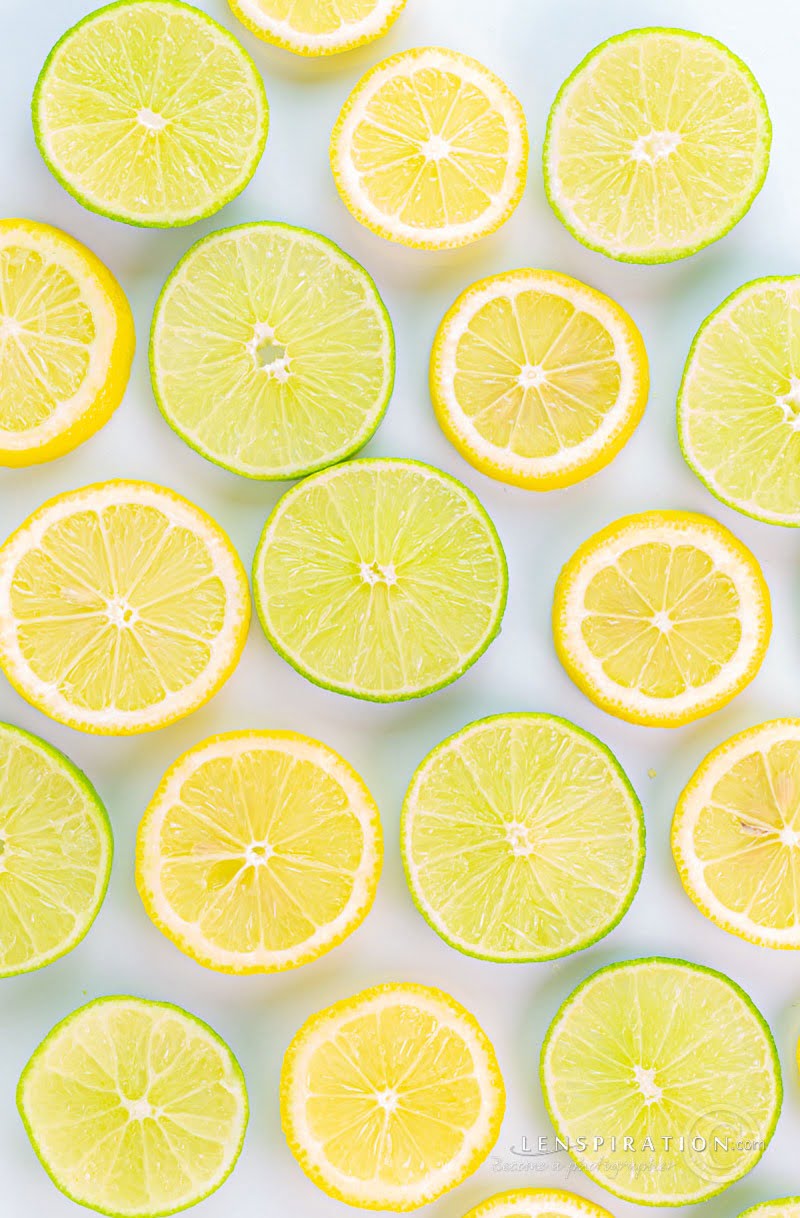 I thought this would be so cool, diagonal lines alternating limes and lemons. But I never really thought about how the inside of limes and lemons are basically the same color! From a flat-lay perspective, you can’t hardly see the skin of the fruit at all. 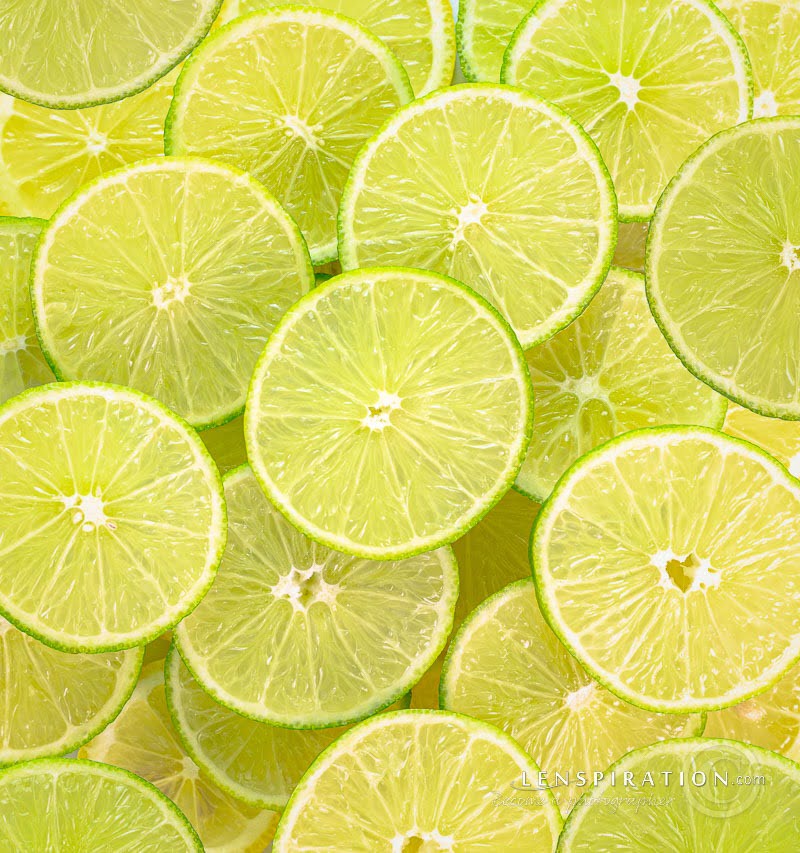 This was better. It took a bit of Photoshop to fill in some white areas along the edges (since I didn’t have all the limes in the world) and I did add a green tinge to the whole thing, but the majority of this photo is naturally arranged.

Of course, I couldn’t walk away without getting a classic detailed shot of one single slice of lime! 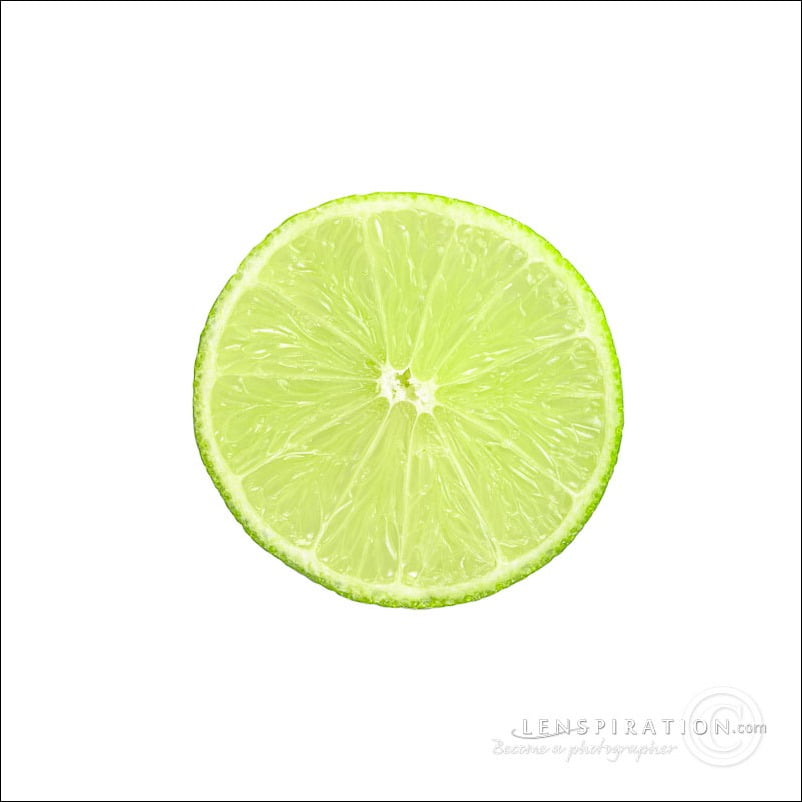 After basic editing in LR, I brought this photo into Photoshop so I could cut it out, make the background pure white, and add more green color.

And why not make a lime clock while I was at it.

Not completely satisfied with pure white backgrounds only, I decided to brighten things ups by adding some color! 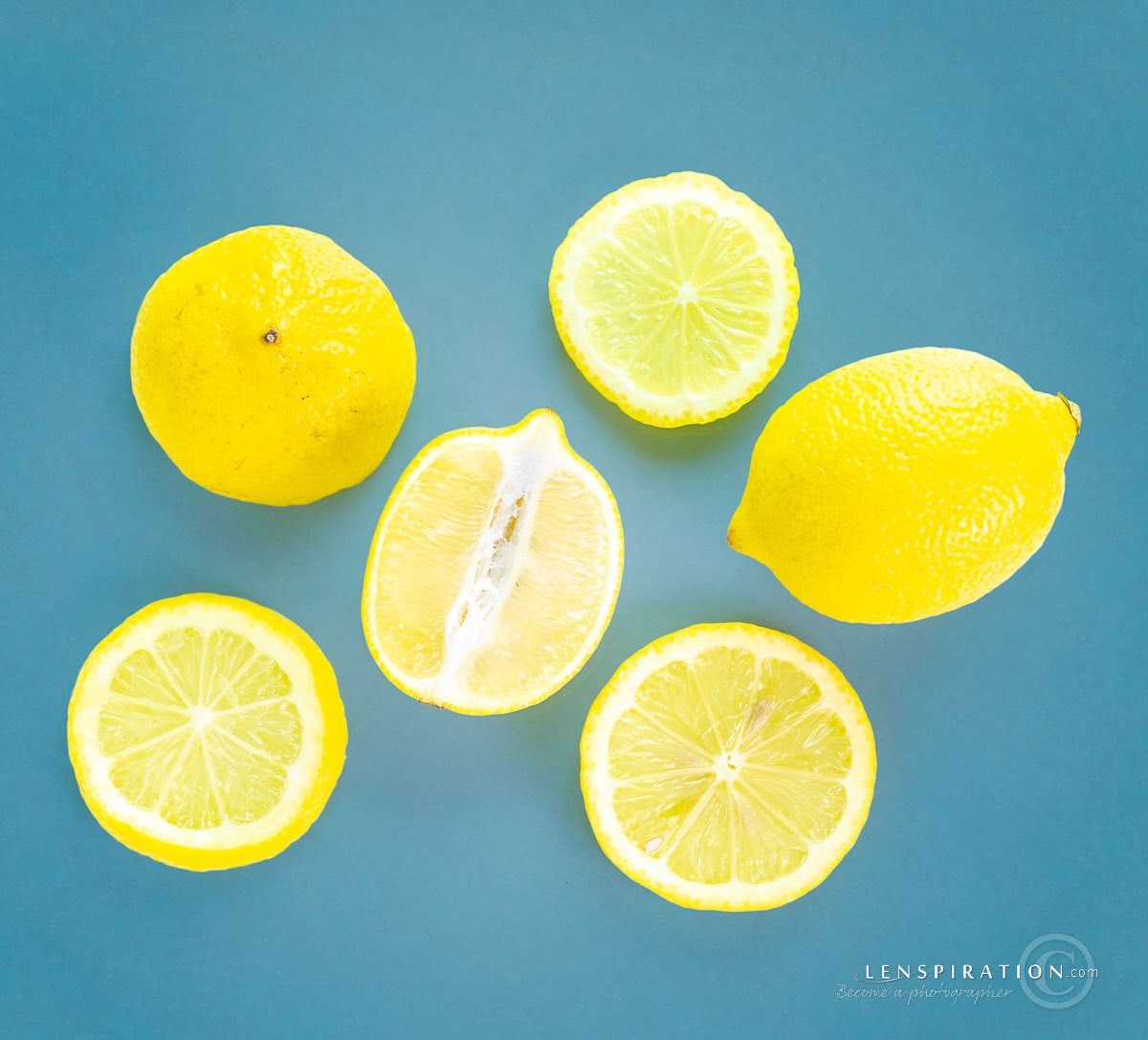 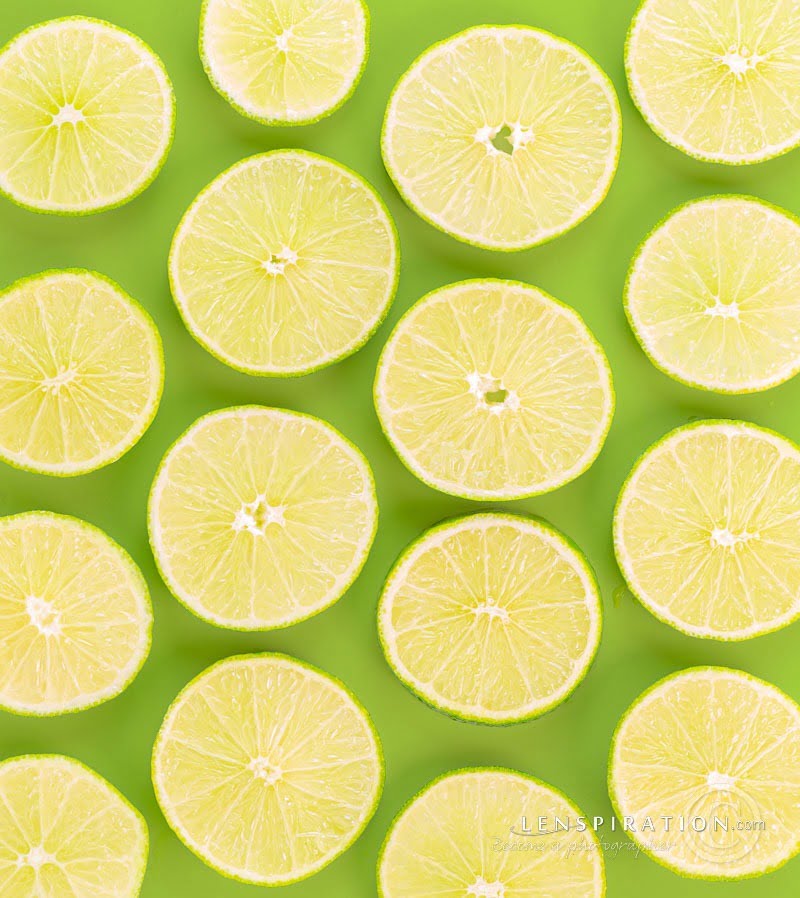 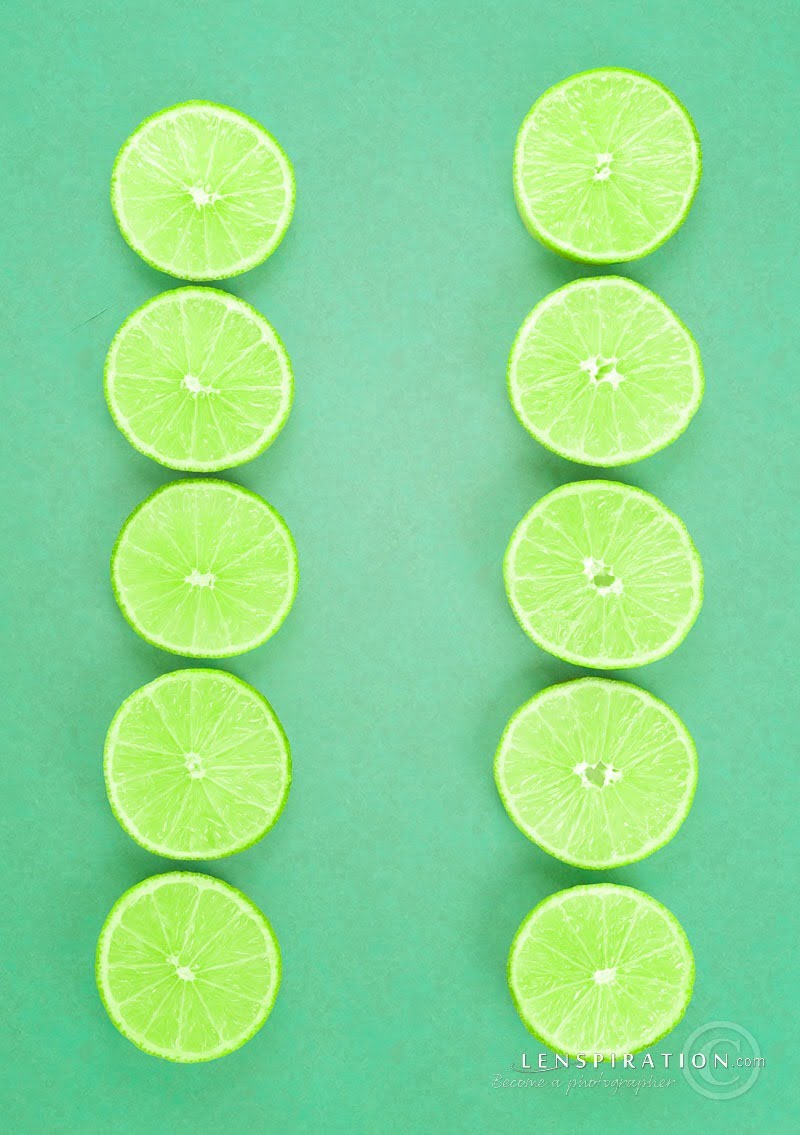 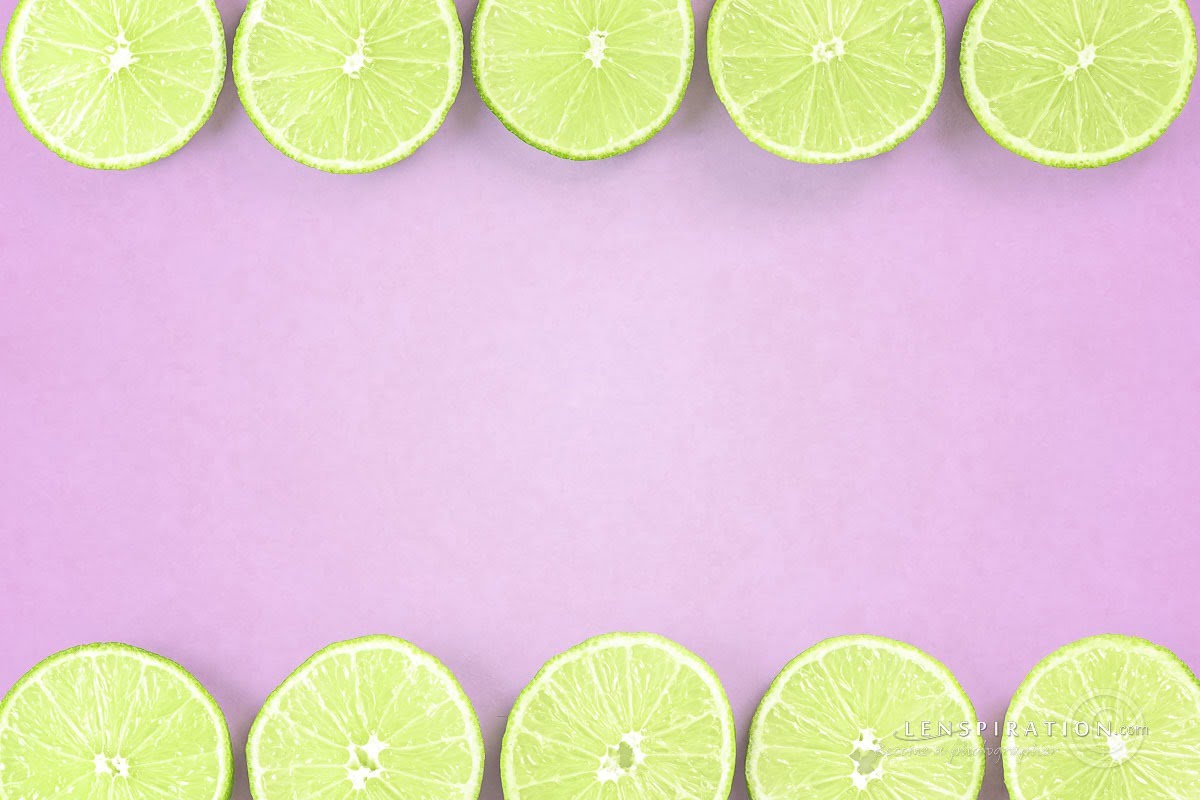 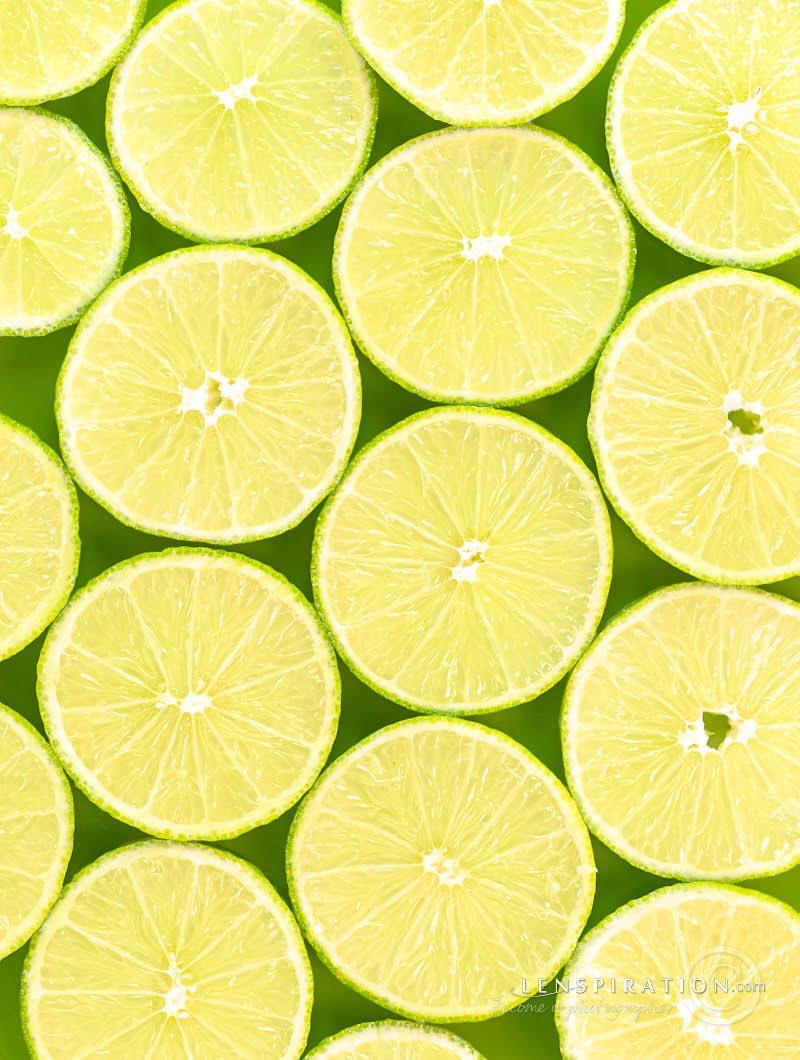 I never did get around to “the cinnamon, cloves, and ginger.” How does one burn up 2 solid hours playing with lemons and limes?!

I guess the other raw ingredients will just have to wait for another assignment.

You’ve watched me shoot the assignment and hopefully my photos have given you some inspiration for shooting some things yourself. Now it’s your turn to go out and shoot Raw Ingredients!