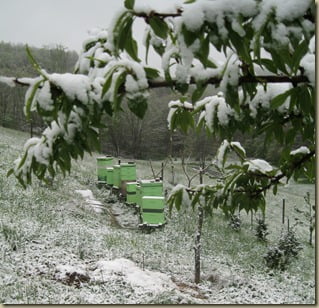 We’ve had snow in April before, but it is usually just a light dusting, and early in the month. What made it especially unusual this year was the warm weather preceding it, which had caused many plants to  leaf out and bloom early. This situation enabled us to take pictures of the snow with things like nearly ripe honeyberries, young peaches and blueberries, Autumn Olive in full bloom, and raspberry flower buds. How much would it damage our frost tender plants and young fruits? 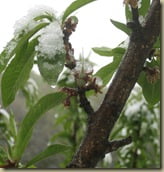 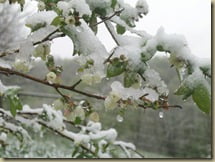 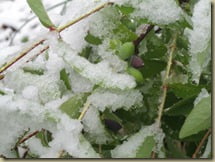 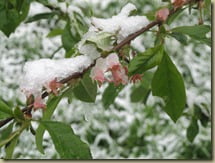 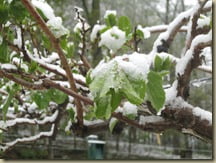 Thankfully the temperature did not quite dip down to freezing, and even our hardy kiwi’s new growth was unharmed by the snow! There had been some freeze damage earlier in the year, but thankfully nothing additional due to the snow. In the afternoon the snow was gone, and the next day the hillside was sparkling with buttercups again and the bees were buzzing as if nothing had happened.

He sendeth forth His commandment upon earth:
His word runneth very swiftly.
He giveth snow like wool: He scattereth the hoarfrost like ashes…
He sendeth out His word, and melteth them:
He causeth His wind to blow, and the waters flow.
Psalm 147:16 and 18