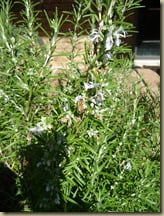 Its has already been four years since I first wrote about growing rosemary outdoors up here in the mountains! I still do not know if anyone else grows rosemary outdoors year-round in north-central  West Virginia. But the Creator has given us a treasure in the Rosemary plant with many hygienic, culinary and medicinal uses. Can a plant that loves a hot dry climate and sandy soil survive in a cool damp climate with clay soil?

There is one hurtle to jump in growing Rosemary here. Other than that, I have found our ‘Madeline Hill’ hardy Rosemary an easy-to-care-for herb. No pruning needed, or fertilizing, or watering even in drought, and no disease or insect problems. Harvest is easy, and as a seasoning, a little goes a long way. It even dries quickly for preservation and has a lot more flavor than the who-knows-how-old stuff from the store.

Winter protection is the mysterious hurtle. Protection from constant dampness may be more important than insulation from the cold and wind, at least to a degree. 🙂 The tag that came with our Madeline Hill plant said it would survive –15 F, and I have seen it survive –3 F without protection. Plant it on the south side of a wall or foundation – and if the eves protect it from too much moisture, that is all the better.

If you feel you will need to insulate it, just watch the forecast for dangerous temperatures… and when they have arrived, put a support over the plant and drape something over it like several layers of burlap or blankets. I would recommend a final waterproof layer. It is nice to uncover it in warmer sunnier weather, and it is not too much work to cover it up again once or twice during the winter if needed. I would insulate any rosemary plant in its first winter if the temperature goes below +15 degrees F.

I hope you give it a try!

Yes, our original ‘Madeline Hill’ plant is still thriving, and we have a 2nd one now. If you are interested, here are some details on winter protection  and survival experiences since the last update…

In 2008 I layered three stems to create three additional plants, and as of April 2009 they had all survived their first winter (with burlap insulation). The coldest temperature was –9 F. All three remained connected to the parent plant underground even though they had developed their own roots. They were severed in April 2009 and grew well through the summer. Two of them were transplanted to new locations.

In the winter of 2009-2010 was a very wet year, which may be one of the reasons that one of the new plants died, despite being insulated from the cold. It appeared fine all winter until March, at which time it just dried up. In 2010 all three remaining rosemary plants did great. 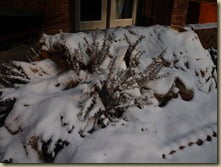 In the winter of 2010-2011, I insulated the old established plant a little differently. It was so big that I didn’t have a way to cover it completely, so I packed burlap in and around it, leaving some of the shoot tips exposed. Interestingly, the leaves and young shoots in the center of the plant “protected” by the burlap died, while the exposed shoot tips survived! The coldest temperature that winter was –3 F. My hunch is that dampness is as bad for rosemary as cold. The burlap packed around the plant became wet from melting snow and stayed wet (and probably frozen) most of the winter. It was an odd-looking plant come spring with tufts of living shoots at the tips and a big empty middle! The shoots that survived best were those closest to the brick wall.

The thicker woody branches in the center remained healthy but never sprouted new growth to fill in the center of the plant. The plant only grew at the ends where the younger shoots survived. Unfortunately, a second one of the newer plants died that winter, leaving us with the old established plant and one “new” plant. The one that died was the one that was not transplanted; it was crowded by the parent plant, hugging the ground, too wet through the winter, not enough light and air I suspect. In 2011 both surviving plants grew well.

This winter (2011-2012) has been unusually warm. I covered the younger plant once so far and have not covered the older plant at all, and they seem to be doing great, even though the weather has been very wet. We have had frequent warm days and it has not been below 10 F yet!