However, a friend from church happens to be a real pro, and out of his overflowing generosity he asked if any of us would be interested in a turkey hunt. He enjoys recording hunts on video, and since Jonathan enjoys video work, Jason welcomed him along too.

Our schedules restricted our possible hunting dates, but it worked out well for the first Wednesday of the season. The three of us made plans and dreamed and prepared, but as the date drew closer and closer, the prospects looked darker and darker. Cattle had to be turned loose on the chosen piece of land. The fence had to be checked, so people disturbed the area. Finally, the weather prediction called for a high chance of rain all day, starting well before light. Nothing new for this spring! 🙂 Late Tuesday night I checked the weather again before going to bed and the chance of rain was reduced to 30% chance for a short time in the early morning. “At least it might not be pouring on us on our way to the blind” I thought to myself. I had the feeling we should have tried to reschedule the hunt.

For some reason, I woke up the next morning at 3:51, nine minutes prior to the time I needed to get up. I got out of bed and began to pray. Soon I began to wonder why my alarm clock wasn’t going off. Turns out I hadn’t pulled the “safety button” out! (It’s an old fashioned clock.) Wow, when was the last time I just woke up at this time? Hmmm… maybe God is in this.

Then I checked the weather one last time. Only a 10% chance of rain almost all day – clear skies now predicted! Wow, when was the last time I saw that kind of reverse in the weather prediction overnight? Hmmm… maybe God is in this.

Can you believe it? Donald got up to help, enabling us to get out the door right on time? Thanks Don! This part of the story is not so out of the ordinary 🙂 but God was definitely in it!

At Jason’s house, we were treated to a delicious breakfast. Jason was well prepared and soon we were headed to the hunting blind. “I’m glad to see the cattle here in the field away from the blind” he said. Hmmm…. God is in this!

It was a beautiful morning: cool, comfortable, and clear, with the aroma of blooming honeysuckle, a colorful sunrise, beautiful mountains in the distance, and a chorus of birds. Even the sweet call of a Whip-Poor-Will refreshed us.

Jason could call like an expert: the right calls at the right time, and the right amount. I wasn’t as good at picking up the sound of distant gobbling as Jason, let alone estimating the likely age of the bird by the sound of the gobble! It turned out that no gobblers had roosted close to the blind, but some big old boys gobbled on another part of the ridge; it would just take a while to bring them in.

Then a turkey appeared! At first we thought it was a hen – Yes! Great gobbler bait! Then we realized it was a jake, followed by three more. Oh, no; now I have to decide whether to take it, or wait for something

“bigger and better”. They strolled in to point blank range. It was a tough call; shoot, or don’t shoot? After what seemed like a long while of turkey watching, Jason suggested I take the shot, and I did. We learned that 12 gauge shotgun + 2 oz. of no. 5 shot packed into a 3-inch shell + point blank range = smoked turkey!

And it is a good thing I took the shot: the cows were walking toward the blind, and getting close. The blind was in a shady area where the cows like to come to loaf around when the day gets warm. If we had waited, our chances of getting another turkey today were very slim. Even better, our wild turkey dinner would be much more pleasant with a nice young

juicy tender jake compared to a big, old, tough, stringy gobbler! A good  first impression of wild turkey for the rest of the family is important for the future of Staddon turkey hunting. 🙂 And we can keep on dreaming of the “big one” next time!

God had sure blessed our morning. Jason’s generosity amazed me over and over again. Jonathan and Jason both took some good video, which we hope to post here in the near future! It was a very special time together in every way. 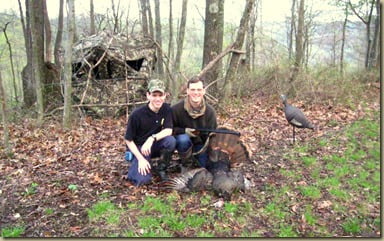