It’s time to take some pictures for the missionaries in Europe again!

This time, we’re going for a spring-time theme. And illustrating Psalm 119:103, “How sweet are thy words unto my taste! yea, sweeter than honey to my mouth!”

If you decide to go out and take pictures of honey bees like I did, beware. Don’t get stung like . . . well, watch the video. It’s quite the adventure being in the danger zone!

Now let me show you the photos that I took for this assignment! I only meant to take a couple shots, but it turned out to be such a fun assignment that I came away with quite a few.

As you can see, my first shot of the honey comb is a complete dud. Compositionally, I wasn’t inspired. My idea with the flowers in the background didn’t work either. At all. 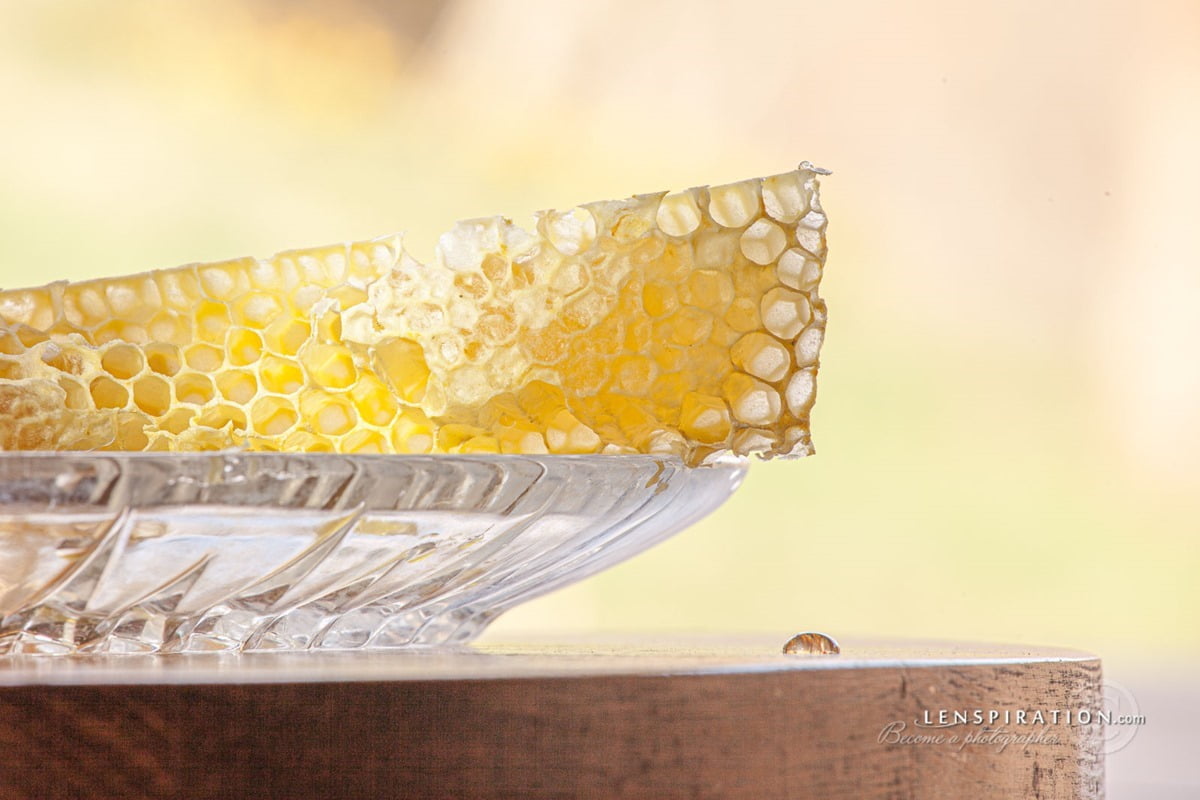 Moving over to the other side of the porch really helped. Now I actually had some interesting lighting to work with. Changing my subject to something a little more interesting helped too. 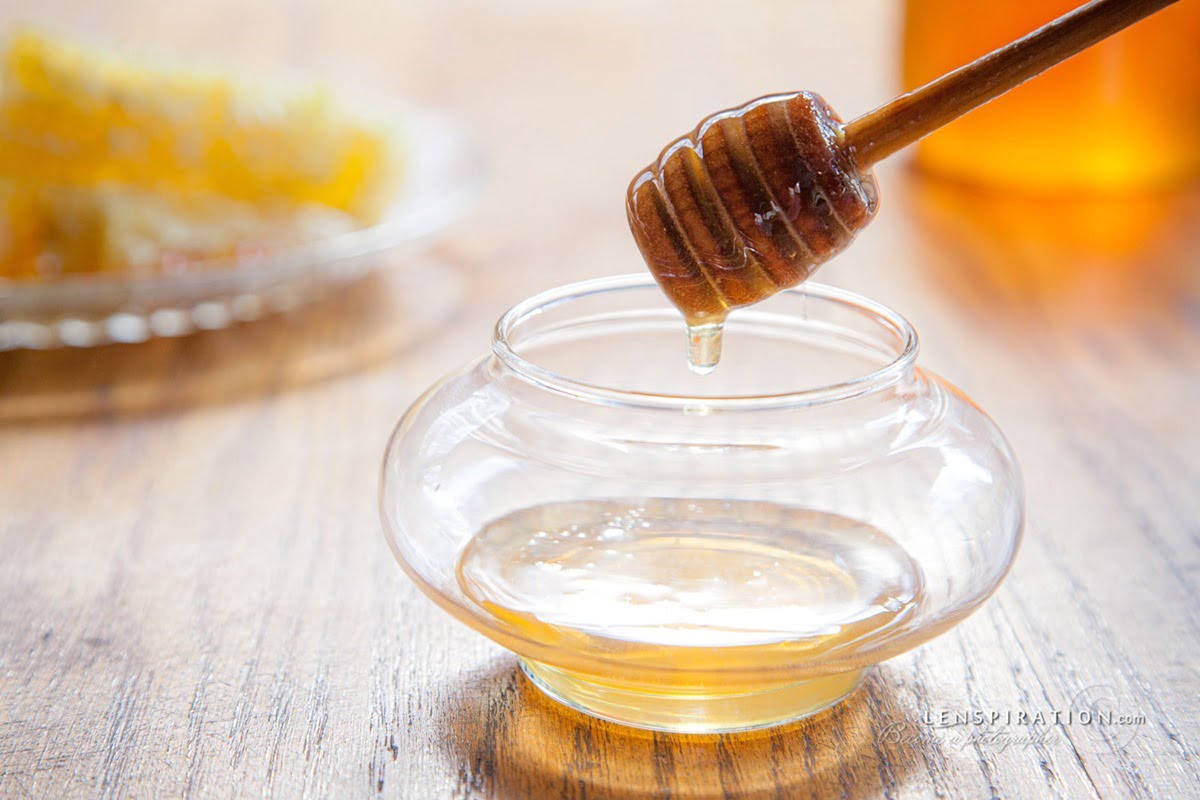 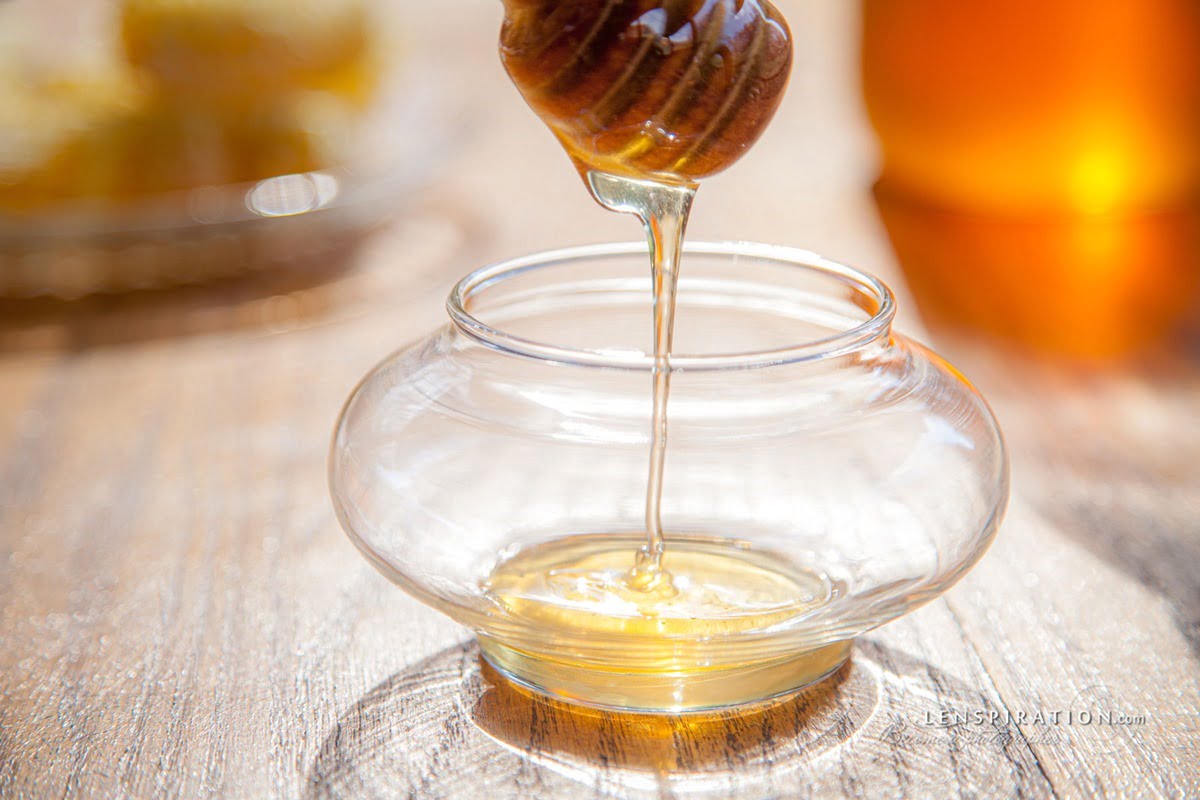 After shooting the action, I felt I wanted a more still-life looking shot. After everything I had been through up to this point, this shot just felt so easy. Arrangement was simple. The honey jar was pretty plain looking so I wanted to cover it slightly, which the “ornate” honey comb did a pretty good job of doing. The bowel of regular honey-saturated comb I intentionally set aside a bit to be my main subject, enough to not overlap the jar at all yet still feel like it was part of the arrangement. I tried having it overlap for one shot, and it just blended in too much. Looking back, I wish I had spun things around a bit so the bowel wasn’t in the shadow of the honey jar. Focus here was pretty tricky too. Of course, I wanted a shallow depth of field so the background would be all blurry. At first, I tried focusing on the middle section of the honey comb in the bowel. However, that really made the honey comb look like it was out of focus. Making sure that it was focused on the part of the comb closest to the camera was what it needed to make it look like the photo was in focus. 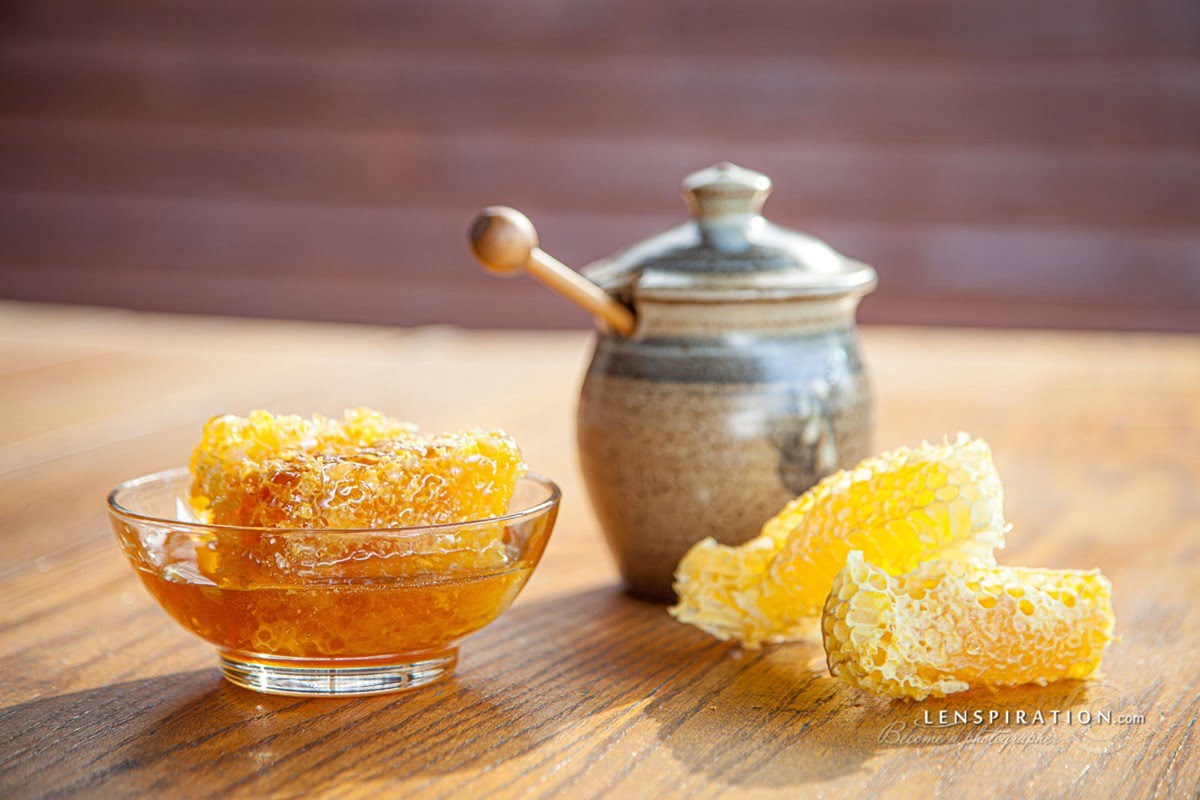 Moving out into the bee yard, I really liked the look of the comb that wasn’t capped yet. I was surprised that the amount of bees crawling on the frame really made it difficult to see those uncapped cells. And I really was shooting haphazardly. Having a central point for the eye to go to first is really important, but the bees were moving constantly so it was quite a bit more difficult to photograph a frame of honey than I thought it would be. Thankfully, this one of many shots happened to have the head of one bee specifically in focus, and that, amplified in post processing to be sharp and bright, is what makes this shot work.

The sun wasn’t on the hives for long, but it sure was on the hill side behind us! I kinda liked this angle because it set the beekeeper and what he was doing against a very simple background. I think it’s ok that the background is “blown out” since it’s not the subject. 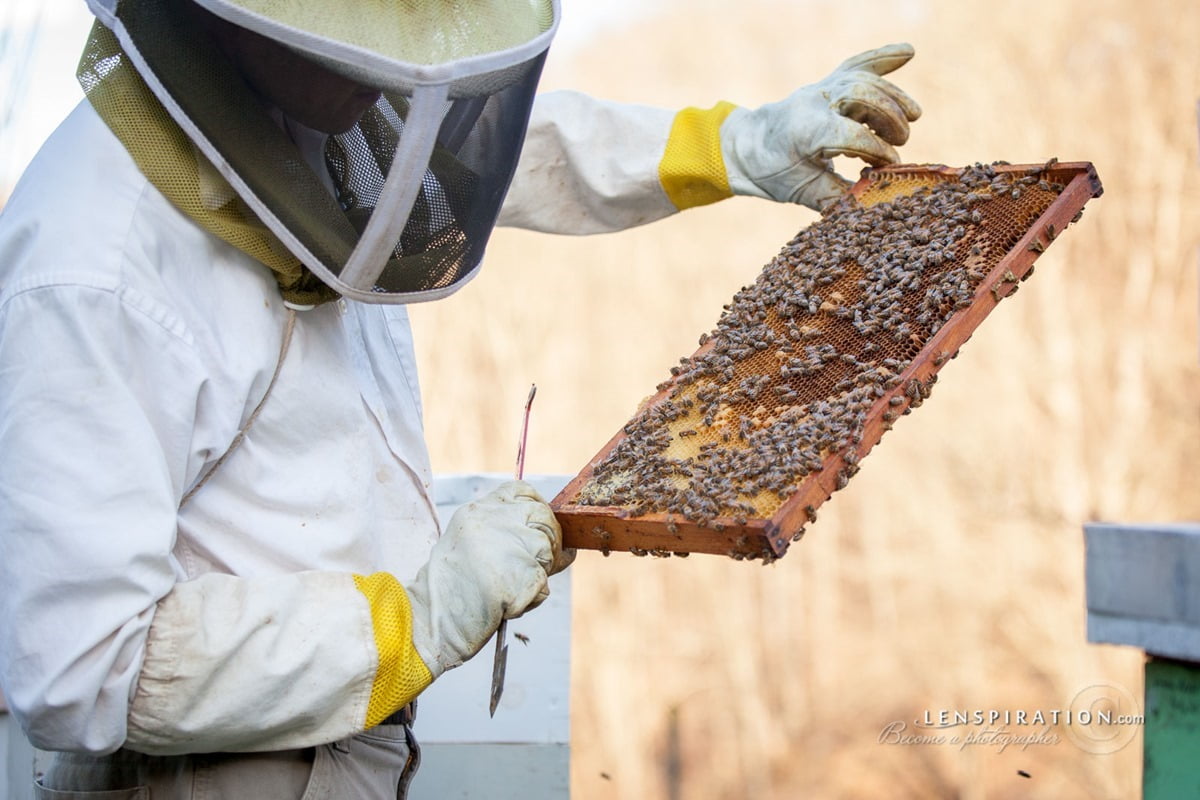 Moving position again, I took this shot with the intention of getting the white blossoms in the background. I don’t think it really worked because the bright, washed-out trees are just as bright and “flowery” looking as the blossoms. However, it’s a good angle and a good posture, so I think it would work well for a calendar shot with room for text around it. I also like that it’s not so tight. There are a lot more beehives in the photo making it look more like a picture of a beekeeper working in a bee yard instead of just a picture of a beekeeper. 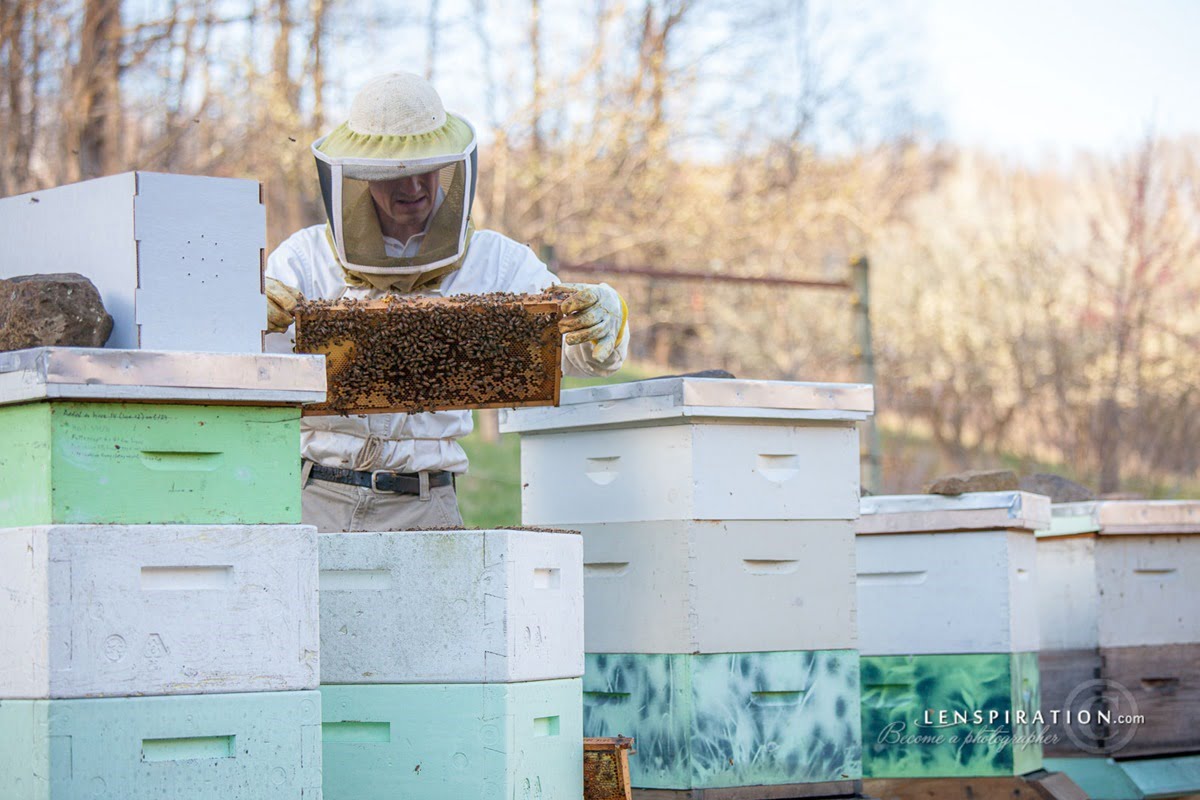 My final position, and actually my favorite perspective of them all, was with the pink blossoms behind the beekeeper. The composition just feels right, and the green, pink and, yellow color combination is just really pretty. It’s all muted because it’s all in the shade, but I really like the soft, nostalgic feeling that it creates. And it’s neat that the bees flying around aren’t just black specs. They’re actually kinda backlit, making them brighter than the background. Since I was using the 70-200mm lens, it was quite tempting to zoom in too far, only taking pictures of the beekeeper’s action, but stepping back to what seemed really far away and making sure to include some “story”, I think those elements are what makes this last angle here my favorite. 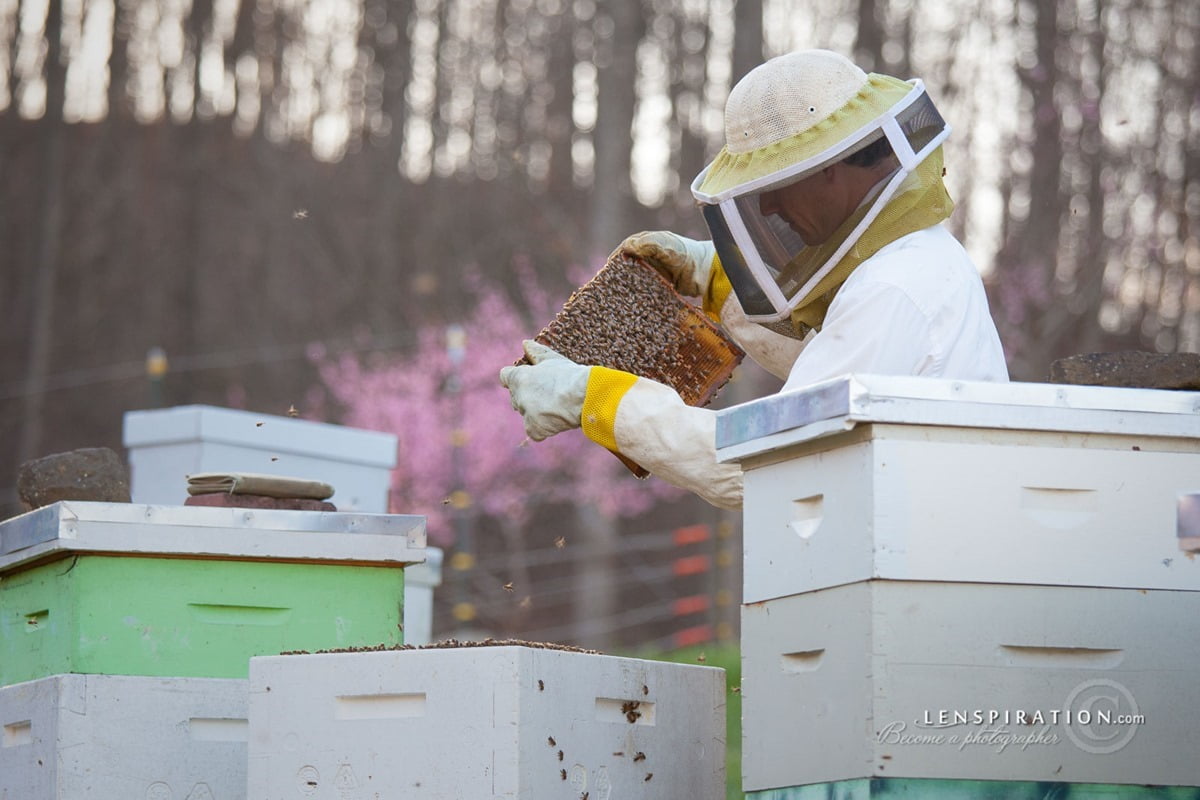 Now that you’ve seen me shoot this assignment, it’s your turn to photograph the concept of Sweet As Honey! Challenge yourself. Feel free to let the community know on the Lenspiration forums if you have questions along the way!