Have you ever dreamed of framing mountain goats, bighorn sheep, and a bear all in one photo?

Well, we had never dreamed it was possible either but . . . It is possible—if you’re in the right place at the right time—that is if you are in the center of the Lord’s will, on the lookout, and have your camera ready for whatever He brings. It was certainly such a miracle when, on the afternoon of October 3, the Staddon Brigade reentered the US from Canada, overcame the initial shock of seeing everything covered under a thick blanket of snow, and drove up into the dizzy altitudes of Glacier National Park. 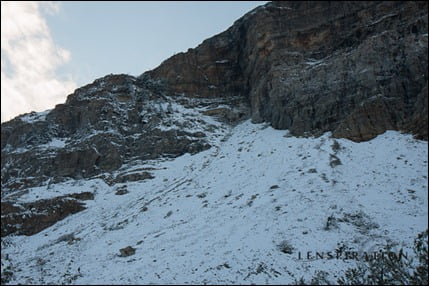 As you hunters know, snow is the ideal backdrop for trying to spot wildlife in the wild. And according to what we were told the snow

brought the animals down to the valleys where the roads were. Yes sir! There was a Grizzly well within observation range from Many Glacier Road and the next day Jonathan was in the right places at the right times to see four moose in one day!

Back at the Dancing Bears Inn we spoke with a surveyor who had a very different story. He had frequented the park often over the course of the year. Yet, he said, he had not seen a single large mammal to speak of. This made us all the more amazed for God blessing us with such a great number of sightings in such a short time. It had also been James’ goal to plan the trip for when the trees (and not the tourists) would be at their peak. Praise the Lord, the weather turned out to our advantage in every way and the photography opportunities were endless. It really was a perfect answer to prayer. Thank you for your planning by faith James!

After only forty-eight hours it was time to leave the park. Still we found the miracles did not cease. We must give God credit for two other miracles, timed in such a way as to leave us full of

dirt roads. However because there had been no rain the roads were still drivable and we made it  through with little more complication than an extra layer of dust on the Staddon Wagon—and an

excellent viewing of a pheasant flock! (Pheasant were so abundant we could hardly go anywhere without seeing one. Too bad the coyotes weren’t as easy to shoot!)

Last but not least, and unrelated to the weather, we praise God for helping us locate the gas stations we needed in the backcountry. Maybe I should say gas pumps. We noticed rather early in the operation, spoiled as we are, that there was no shelter of any kind for many of them and we were grateful indeed for a passer-by who showed us how to use the one that was particularly old-

fashioned—and for the children walking down the road who had told us where to find it in the first place! God bless them every one! Such friendly folks made us feel like we were right at home in West Virginia. 🙂 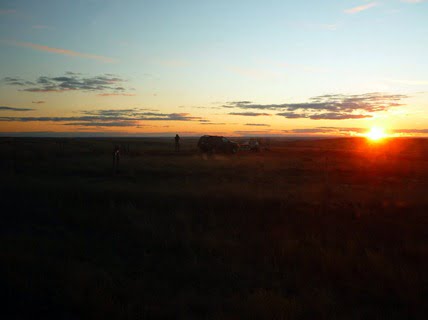