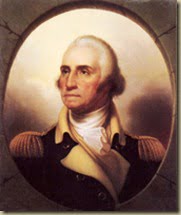 The thrills of fiction are far outweighed by the accounts of history. I came across this one from Seventh Day Baptists in Europe and America (Vol. II, pp.1164-1167, available through CBD for about $75), about Peter Miller, the man called upon by Jefferson to translate the Declaration of Independence into seven languages of Europe. This story recounts an appeal he made to George Washington . . .

“Nor should Peter Miller be remembered for his scholarship alone. One of the most touching episodes in American history is that of his efforts to save the life of Michael Widman, an acknowledged Tory who was condemned to be hung as a traitor. He had been particularly abusive to Peter Miller, even spitting in his face on one occasion. But when sentence was pronounced Peter Miller set out on foot for Washington’s headquarters at Valley Forge to plead for mercy. Washington had great respect for Miller, but replied:

‘Friend Miller, there is scarcely anything in this world that I would deny you, but such is the state of public affairs that it would be fatal to our cause not to be stringent, inexorable in such matters, and make examples of renegades to the cause of Liberty; otherwise I should most cheerfully release your friend.’

‘Friend!’ replied Miller . . . ‘He is my worst enemy—my most incessant reviler. For a friend I might not importune you; but Widman being, and, having been for years, my worst foe, my malignant, persecuting, enemy, my religion teaches me “To pray for those who despitefully use me”.’

“The tears coursed down the brave old Commander’s cheek and, taking Miller by the hand, he replied: ‘My dear friend, I thank you for this lesson of Christian charity. I cannot resist such a manifestation of our divine religion; the pardon shall be granted on one condition, and that is, that you be the bearer of it yourself, and hand it to the commanding officer at Turk’s Head in Widman’s presence.’

“Traveling twenty miles by foot that night, Miller arrived in time to deliver the pardon as directed. As Michael Widman at the foot of the gallows confessed his treacherous acts and asked for forgiveness from those whom he had wronged, including Peter Miller, the pardon was delivered.”