What I call the ‘Big McHenry’ tomato was originally bred in Middlebourn, West Virginia (Tyler County) by a Mr. Mccutchan (or Mccutcheon?) in the earlier part of the 20th century. David McHenry acquired the seeds and continued growing them along with his nephew, Neil, a friend to both my grandfather (Bud Brannon of Salem, WV) and I. Grandpa tried them in 2003. I received the seeds from one of these tomatoes that he grew in Salem and tried them for the first time in 2004. Impressed with the flavor, productivity, and disease resistance, I quit growing any other

varieties the next year.

Number of plants: We just grow what we can use as a family. A large number of plants is not needed for healthy seed production. I routinely plant twice as many pots as I will actually use, and only plant out the best of the lot.
Grow lights: My grow light is located by a south-facing window so that the plants receive some natural light during the day in addition to the grow light.

Soil amendments: I use whatever I can get my hands on for nitrogen, whether horse manure or composted grass or something else. “Grass goo” means a big wad of black slimy smelly decomposing green grass stuffed into the planting hole with the seedling at planting time. For gypsum, we smash old drywall to powder. Rock phosphate usually comes in a granulated form. Mulching the plants with hay has done an amazing job of helping to keep early blight from infecting the plants for longer into the summer. Wood ashes can supply some potassium, but don’t apply them too heavily. I never used decayed leaves until 2010 and credit them with much of that year’s amazing results. 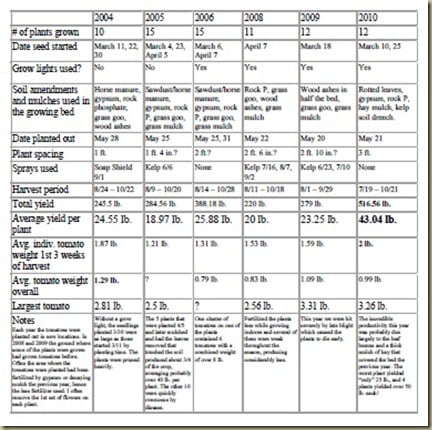 It became a sort of hobby to see how big a tomato could be grown with this variety that was already well adapted to our climate in north central West Virginia. Finally in 2009 I grew three tomatoes that broke the 3 lb.

mark on our scales at home, the largest being 3 lb. 3 oz. The following spring I read that the largest tomato on record for the state of West Virginia was only 2.96 lb. so I decided to have my next big one certified.

To have a record sized vegetable certified, I was instructed to: 1) have it weighed on certified scales, such as at your local grocery store. 2) Have the one who weighed it sign something that includes the location and the date. 3) Send that document with a photo of the grower with the tomato to your local agricultural extension office to be sent to the state department of agriculture.

The largest tomato I harvested in 2010 was certified as weighing 3.23 lb., but of course there was always the possibility that someone else could grow a larger one before the end of the year. This is exactly what happened; congratulations to Glen Knox of Wheeling for his 3.65 lb. tomato!!! I still do not know if his was an open pollinated variety. This fall I started reading about how to grow giant tomatoes for the first time and now have some new ideas to try – ideas which I should have already known just from reading the Bible.