Ring Ring! We all ran to the phone, eager to find out if it was the Bates family. And it was! They informed us that they were leaving….

Now we only had a little time left for final preparation. We all quickly got back to making beds preparing food. The hours flew by as we checked off our to-do list. They had been invited to West Virginia for Mothers Day, and we were privileged to be their hosts. Three of the Bateses were coming in from Illinois with James and Daniel, while the other 16 were coming from their home in Tennessee. Nineteen guests for three days! Could we do it? Of course we could. The Staddon Brigade swung into action and with God’s blessing and lots of cooperation it worked out wonderfully.

James, Daniel, and the three oldest Bateses stopped at Hocking Hills State Park on their way home which gave us some time for family night with our Grandparents.

After supper and Rook our Grandparents had to leave. Just after saying good-bye and seeing them disappear out of our driveway we heard somebody honking; James and Daniel had arrived! After greeting them and showing them where they would stay we played a few games of chess before going to sleep for the night.

The rest of the week flew by as we played ping pong, hiked, went bird-watching, felled trees, rode bikes, played chess and many other exciting

games. On Saturday we were invited to  attend the 40th anniversary celebration for the church that the Bates family’s pastor had

started in Clarksburg. At the service the Bateses were such an 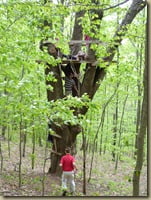 encouragement as there whole family joyfully sang together. We were blessed and encouraged to have the Bates family visit. Their joy and dedication to the Lord shone through as they diligently took care of younger siblings

and helped out in

innumerable ways. Praise the Lord for such a Godly example.

View all posts by Jonathan