Wow! I can’t believe the Big Sandy Conference has already passed! During the Conference, each day felt like a whole week; but now, the whole trip seems like a dream. Regardless of it’s length, it is certain that God’s hand of blessing was upon it. Words could be written without end of the phenomenalities encountered there, but let me just share a few stories of God’s providence from a photographers perspective.

First, I should start by saying “thank you” to the IPS trio who showed up on Tuesday afternoon. Without them taking on the photojournalism aspects of the Conference, I’m not sure we could have made the most of our being there. Knowing that the photojournalism was taken care of, I could set my mind on completing the main objectives of the portraiture project. Thank you IPS!

But now for the stories. When we first arrived, rain was predicted for every single day of the Conference. Now, for a photographer, that is not a very pleasant thing; water and camera equipment don’t go very well together. We were setting up one studio at the Library when, during a downpour, the equipment at the Convention Center for the second studio got completely soaked from leaks in the ceiling. Thankfully, it was still all packaged up so there was no damage. But I didn’t like the idea of unpacking it. How would I know where to set it up where there would be no leaks? It was impossible to know. We just picked a random spot, set it up, and waited. Well, it just so happened that the forecast for that week was completely bogus. It didn’t rain hardly at all! And even when it did once on Thursday afternoon (if I’m not getting the days mixed up), there were only two leaks near our studio set up: one on the right side, and one on the left. Neither were a problem.

The purpose of the studios, and even my presence at the conference, was to help update this year’s ATI re-enrollment forms by taking  portraits of all the students. Now there were a lot of students at Big

Sandy; over 200, I would estimate. This job of taking portraits was a big ordeal, and I had never been in charge of something of this magnitude before. Hence, I was sorely displeased when, by the end of the first full day (Wednesday), our total count of student portraits was, well . . . no more than 18. Eighteen? Even after changing our strategy the next day, it didn’t seem like we would make it. So, on

Friday morning during the first break, I just announced that “everyone else” come down to the studio. And come they did! We shot over 80 students in that one break, and by the end of the day, we had basically completed our task–just in time.

Another incident of God’s graciousness happened on Wednesday afternoon. I just finished making the announcement that everyone with the last name beginning with C to F come get their picture taken.

I walked into where the studio was being set up and was informed that one of the special power cords to the strobes was missing. We forgot to bring it over from the Convention Center: a ten minute walk and at least a 5 minute ride there and back! So, with 5 minutes left, I rushed upstairs to look for someone with a vehicle. There just so happened to be two IMI guys standing

there which, to my great surprise, said they had a vehicle! “Could I ask you to take me to the Convention Center and back real quick?” “Sure.” So we were off! But we weren’t off as fast as I would like. As we took our time, I felt myself getting up tight. “Stop,” I told myself, “it really doesn’t matter that much. Relax, and let the Lord work it out.” And work it out He did, for we got the cord back just in time.

“Providence has at all times been my only
dependence, for all other resources seemed to have failed us.”
— George Washington 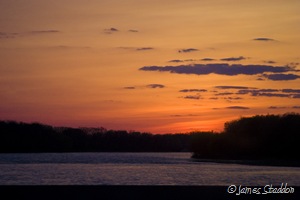