I never dreamed how difficult it would be to replace the bezel on my laptop! In April 2013, having used my good ol’ Dell Studio XPS 1640 practically every day for over 2 years, the screen was getting kinda scuffed up and I wondered what it would take to get it replaced. That was when I found out, thankfully, that I didn’t actually have to replace the actual expensive screen. On this particular laptop, the bezel actually acts as a special protective layer over the entire screen so that was the only piece that I had to replace. Whew.

I bought the bezel for a really good deal on Ebay. All I needed was a little screwdriver to unscrew 4 little screws that attached the bezel to the screen. No problem, right? Well, I couldn’t find anything in Dad’s tool box that was small enough for the tiny, six-point star on the head of the screw, so I stopped at our local Napa store. That was the only place in our town that I figured sold screwdrivers. I brought in my laptop, showed them the screws, and . . . “Nope; we don’t have anything that small.” 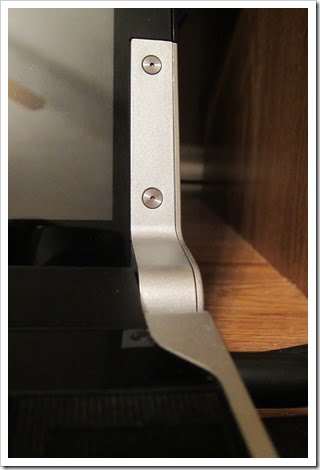 I asked Grandpa about it. He was a jeweler way back when. “I’ll bring over whatever I think might work”, he told me after studying the screw heads. Turns out, that because he had sold most of his intricate equipment long ago, that he didn’t have anything that fit either.

So, about a month after I got the bezel, and before taking off for a multi-month photo excursion, I took my laptop to the big town, Clarksburg, where I knew there would be plenty of places to buy the screwdriver. The only time I had on that particular day was to stop at Radio Shack. We tried a few screwdrivers but everything was too big. “Go to Lowes” they said. And that’s where I left it for the next few months.

By now, about 10 months after buying the bezel, my screen was looking scuffed up more than ever so I just decided that I was going to get it done. And get it done today! So today, to Lowes Dad and I went. The lady at the info counter kindly told me that folks had asked for the exact same thing in the past . . . but that they didn’t sell it. “All we have is a T10 size, and that’s much too big. Have you tried Radio Shack?” she asked. I smiled. She suggested I check out “a computer store.”

Next door was some store whose name had “Wireless” in it. The guy inside knew exactly what I needed. “You need a T6 size . . . but we don’t sell those here. You can buy them on Amazon for three bucks.” Wish I had known that 10 months ago! But that was out of the question now; I leave for another photography excursion on Thursday which leaves no time for shipping.

But at least I knew what size I was looking for. We stopped at an AT&T store next. Surely they would have it; I had heard somewhere along the line that it was the size used to open up mobile phones. “I’ve got exactly what you’re looking for! I bought one at Sears a few years ago” said the kind customer service guy, whose name happened to  be James too. He walked out and returned with a T6 size screwdriver. I tried it on my laptop with anticipation, but alas, it was too big. “Hmm. Maybe the optometrist folks next door would have an even smaller size” James suggested.

So to the Optometrist we went. They were super busy. There was a long waiting list, so we didn’t stay to wait. Instead, we walked over to Walmart. They have a Vision Center and surely they fix glasses with tiny screwdrivers. The guy behind the counter said he would be glad to help! He disappeared around the corner and I could the banging of drawers and cabinets. Then everything got quiet for a few moments. “Nope” he said, when he finally returned, “We only use flatheads and Phillips screwdrivers around here”; not the teeny-tiny star heads like I was looking for. It was about the 3rd time someone asked whether or not I had been to Lowes. “You know, Dicks Sporting Goods has precision equipment for sighting in rifle scopes” was the next suggestion.

We had some shopping to do at Dicks anyway, so that’s where we went. Dad went to ask around while I tried on hiking boots. Dad came back with the 6th “nope” of the day. “I’m going to check out Sears” he said.

Dad went to Sears. There was a set of star head screwdrivers with a T6 size for $25. Then there was a set with a T5 size for $35. Oh well. It wasn’t worth buying an entire set for just the one size we needed. But wait! On the bottom shelf they were being sold individually. And for three bucks! Back at Dicks, Dad told me the best news I heard all day: “The T5 size fits, and here it is!”

Ask, and it will be given you. Seek, and you shall find. Knock, and it shall be opened unto you. I guess sometimes you just have to knock a little harder.