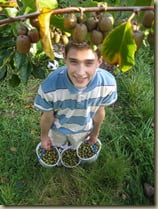 Experimenting with hardy kiwi in the mountains of north central West Virginia has been an interesting experience. Also called “kiwi berries”, Actinidia arguta is a species of kiwifruit that grows a smaller, smooth skinned version of the big fuzzy ones we are familiar with in the grocery stores. As its name implies, it is much more winter hardy and that is why we decided to give them a try. It was in 2006 when, with the help of our good friend and expert welder Neil McHenry, we erected the sturdy trellises on a sunny south facing slope and planted the four kiwi vines under them. We had purchased a fruiting vine, a pollinating vine, and two self-pollinating ‘Issai’ cultivars. There was no way I could find out exactly which cultivar the fruiting vine was, but since the nursery did not advertise specific cultivars, I assumed it was the common ‘Ananasnaya’ – or ‘Anna’ for short.

I had read that ‘Issai’ was slightly less hardy than the typical “hardy kiwi” and sure enough, those two vines failed to survive the winter. However the fruiting vine and its pollinator have never had any trouble with winter survival. In a few years the vigorous vine had spread out over the trellis quite nicely and now the two ‘Issai’ kiwi vines have been replaced with two other cultivars. We hope to report on them in the future.

2011 was a special year! Although hardy kiwi can easily survive our mountain winters, they are ready to break dormancy in the spring as soon as they sense warm weather. As a result, our “Anna” vine would always leaf out in early April, get hit by frost, and have to start over again. Even a light frost would blacken the leaves and shoot tips. In past years, whenever the vine bloomed, the flowers were always misshapen or partly black. But in 2011, the vines narrowly escaped all threatening frosts. Apparently the vines were elevated sufficiently on the hill to allow frosty air to drain away from them just enough that they were not affected by the light frosts that occurred occasionally throughout the rest of April and May! The bloom, which began around May 25 was thick and full and fragrant!

One more problem. Due to a setback the pollinator vine had almost no flowers on it this year. I could see no way for the fruiting vine to be pollinated well enough to produce a good crop. I did not expect any fruit at all. But as time progressed through the spring and early summer it became obvious that there was going to be a harvest! How was this possible? Could this vine have been self-pollinating? On August 22 I found the fruits full of little black seeds, just like fuzzy kiwi. They were still very hard and far too tart to be edible.

Finally came the day of September 12 when I made a quick check of the kiwi vines and noticed that one of the berries was wrinkled like an empty sack. “Must be rotten” I thought. I picked it and some green liquid oozed out. “I wonder what rotten kiwi tastes like.” I touched my tongue to it. Then I licked it. “Wow” I exclaimed, “that’s not kiwi! That’s lime candy!!!” I just about did cartwheels all the way back to the house. I could not wait for everyone else to taste them. When they did, they were amazed at the level of sweetness and flavor “like a mix of grape and kiwi” they said. The skins were a bit leathery with a reddish blush, matching the description of the ‘Anna’ cultivar perfectly.

With the help of Donald, Jonathan, and David, most of the fruit was harvested on September 28. At that time most of the fruits were still hard, but became sweet as they softened at room temperature. Squishier usually meant sweeter. Refrigeration seemed to slow the ripening process so that we were able enjoy them over a long period of time. October 10 was the date of the last harvest, when most of the fruits remaining on the vine had become soft.

Kiwifruit is an astounding source of nutrition (more links here and here) and we praise the LORD for making kiwifruit a possibility for our climate… “Who satisfieth thy mouth with good things; so that thy youth is renewed like the eagle’s” – Psalm 103:5