Today was Robert’s last day as a bachelor. We couldn’t let it go without a little adventure!

After a full and pleasant evening of preparing for tomorrow and spending time in prayer and blessing, Jeaven asked Robert for the keys to his car; Jeaven needed them to retire to his lodgings for the evening.

But Robert found no keys in his pockets. Immediately, he knew there was something amiss, and, as if to confirm his suspicions, David stepped up and handed Robert the first clue of the scavenger hunt.

The hunt, which in actuality was more or less a façade for a greater prank, worked splendidly and flawlessly! After getting Robert to walk all over the hotel grounds in his bare feet looking for clues, we caught him completely off guard with a good drench of Mountain Dew, the stickiness of which was conveniently dealt with by a good dunk in the hotel swimming pool in which were expediently found the keys to his car. 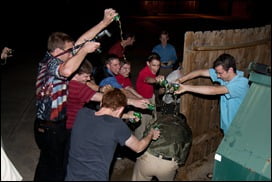 By this time, the clock had stuck 12:00, and Robert’s last day as a bachelor was over. We love you Robert, and look forward to seeing how the Lord will work in this new, exciting phase of your life!