Banquet to honor the training center directors and other special guests. I was asked to help organize the servers for the banquet, and this position allowed me to see firsthand the exhaustive attention to detail, flawless teamwork, and Christ-like character which made it possible to pull off this monumental undertaking with stress-free efficiency and expertise!

It was so neat to see God put together all the details. That very morning I happened to read Matthew 20:27 which talks about being a “servant” of all. The Lord also brought my attention to the section a couple verses earlier in the chapter, where the sons of Zebedee with their mother approached Jesus and asked for “special seating arrangements.” What was his answer? This “is not mine to give, but it shall be given to them for whom it is prepared of my Father.” (Matt. 20:23).

The night before we had been rearranging the tables to accommodate the new number of guests that were expected for the banquet, but we came up one chair too short – and we had already packed the seats in as tight as possible! At that very moment we received a call from one of the couples saying the wife would not be able to attend. How often do problems get solved that easily?

Then, during the evening of the banquet, soon after we had begun seating each couple, one couple came up to us with a special request to be seated at one of the far tables. Scrambling through our charts, we 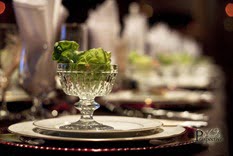 worked out a last-second switch to accommodate them. In the middle of getting this all worked out, two other guests asked to be seated early. I thought all our careful plans to seat the guests table by table were being totally thrown off, but the Lord gave me a peace that this had all been “prepared of my Father.” It was then that I suddenly realized where these two guests were supposed to sit: directly across from the first couple at the far table! Everything could not have worked out more perfectly.

This was just one of the many ways that we saw the Lord pour out his blessing on the entire event. There is joy in serving Jesus!

View all posts by Daniel