Nope, I haven’t forgotten about posting the Pics of the Month! I just figured it would be better to post them on the last day of the month instead of the first; that way, each picture will actually have something in common with the month it’s supposed to represent. When December rolls around, how can I post a picture of the spectacular fall foliage I shot in November? In March, are we are not slightly tired of seeing the glistening snow of February? It can now just as well be the Pic from the Month as it is a Pic of the Month. 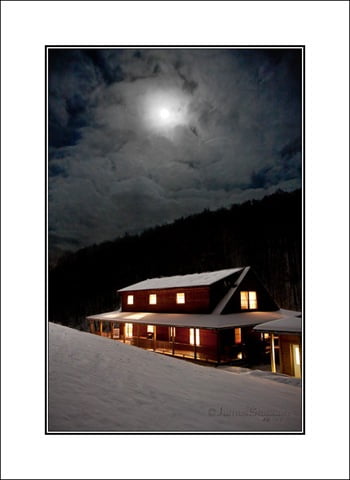 Every year, it has been a goal for me to get a new, cozy picture of our house nestled in the Appalachian foothills of West Virginia at wintertime. You know, it’s like getting a family picture. Sometimes there is never a good snowfall, so you have to get creative. But this year, there was the most phenomenal combination of environmental elements I had heretofore experienced: a full moon hanging in a partly cloudy sky spread out over a charming landscape blanketed in deep snow. Completely enchanted. The last time I ever remember a similar combination (that met my standard of perfection) was seven years ago. Seven years ago! The fact that the temperature was in the teens that night didn’t deter me from venturing out into the dreamy wonderland.

Using a tripod was essential. Turning on all the lights inside the house helped it to look extra cozy. A wide angle lens reached into the sky to lasso in the moon. And a little processing in Photoshop developed the sky, making it look exactly as it did on that glorious, enchanted, moonlit midnight.