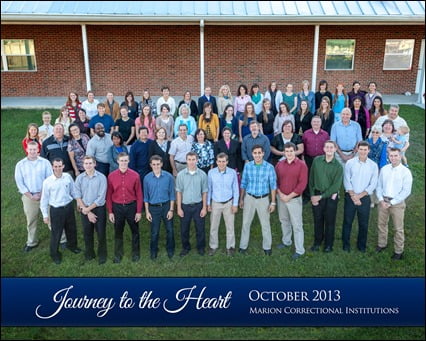 I can’t believe the entire week has passed and the prison Journey to the Heart is over! After working with 9 inmates from Monday to Sunday last week, I thought I would share a few snippets from an e-mail I wrote the family on Thursday:

“It’s impossible to explain what its like here on this prison JTTH. Totally different than any other Journey [I have led]. We go through the same material but the stories, insights, and surface problems are all totally different. But it’s neat to see that the root problems and principles of truth for answers are the same. Just have to ask "why" a few more times to get deep enough.

“As in all groups some get it more than others. Some have come to the place [this week] where they say prison is the best thing that has happened to them because it has turned them to God. They are making daily decisions for doing right and thanking God for everything, even when they least feel like it. It’s good the Journey is as long as it is because they are tested to thank God for everything especially after the "novelty" wears off. One guy wanted to have quiet time with God early this morning on his own; the TV was on so the only place he could find to have his quiet time was in the men’s restroom. 🙂 Another guy told me he wouldn’t want to be anywhere else than at this JTTH. Someone else commented that it should be two weeks. Some team mates jokingly slipped me their ID cards so I could stay in the prison with them because the shirt I was wearing was the same color as their uniforms. 🙂 I was also told that in the morning before we get there the guys get up early and line up before they are told to wait to go (instead of dragging or hiding like is often the case for usual events).”

Just a few evidences that God was working at a heart level and they really wanted to receive truth. Many were saved, all were challenged to full surrender. We focused on meditating on Scripture, claiming the victory that we already have in Christ, rejoicing in all things, and taking responsibility for our actions. The journey has just started for many of those guys, but it is journey that presses on the upward way!