It has been a long time now since I posted, asking the question about Adams’ alleged quoted saying that the Revolutionary War combined the principles of government and the principles of Christianity. Denise, by way of leaving a comment, answered very well. Now how can we apply the relation of religion and government to what we do every day?

The key to understanding government is remembering that authority must be given from above, from God. No one can exercises authority without God originally intending it; He is sovereign; He superintends, as Franklin said, in the affairs of men. He works through kings, presidents, fathers, business leaders, military leaders and church leaders. 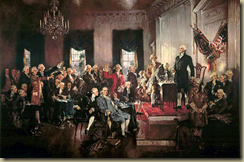 What so deserves our attention about early American Government is that those at it’s forefront, after leading the farmer-tradesman army to victory and independence, went on in less than four years (from the Treaty of Paris in the fall of 1783 to the Constitutional Convention in the spring of 1787) to outline a just balance of powers between the government and the governed. What could you further ask for among the virtues of wise leadership than men of principle who of their own accord bestow the powers of freedom on the citizenry? Setting aside self-ambition they ensured a means of government that would last through their children’s time and their grandchildren’s time—indeed an indefinite time, equal only to the length of time which that people could prove to exercise, their own government. Their own government?! Yes, their own government: a very special, personal, day-by-day kind of government: self-government.

In America it is not until self-government falls asleep that the sleeping giant of tyranny may wake up. If we as citizens, in our personal lives, let up on our own self-government, those privileges will end up naturally in the hands of those who first bestowed them.

Here are three quotes that might be worth memorizing for you:

-Derived from The Power for True Success

3. “How will you find good? It is not a thing of choice; it is a river that flows from the foot of the Invisible Throne and flows by the path of obedience.”

Self-government appears in many ways: responsibility, self-control, patience, thriftiness, kindness. Learn to demonstrate these and you will learn to see it and praise it in others.

Now we come to the conclusion. No, it is most likely that Adams didn’t actually say that the War for Independence had “connected in one … the principles of civil government with the principles of Christianity”—that was John Wingate Thornton–but , by the faith of our forefathers, what that miraculous war did certainly do was set the stage for nations to see what would happen with a people entrusted authoritatively with their own self-government.