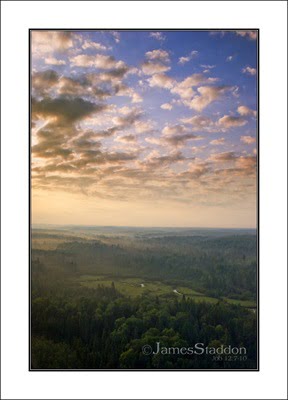 It was an opportunity not to be missed! During the IBLP Staff Retreat, a young man flew up to the Northwoods with a little four-seater aircraft to spend the weekend with the team. When it was announced that he was more than willing to give rides free of charge on the next day, I decidedly chose the early morning slot. It was more than worth the loss of sleep to rise at daybreak to capture the dawn from the sky.

Everything went as planned, that Monday morning, except for one thing: it was cloudy. This meant no dramatic light, no fiery hues, no magical vibrancy! But because we cannot control the weather, it does no good to become anxious about such a misfortune. The only godly response is gratefulness: expressing content for what I have instead of on what I expect to be given.

But sometimes, God will give beyond our expectations, skillfully using methods we least expect. After waiting for a hopeful half hour, this misfortune translated into quite the fortunate happenstance. The clouds broke up into an prodigious assortments of expansive patterns and transformed the muddled canvas into a plethora of color.

It was the clouds that transformed the morning.