No other person in history has sung to more people than George Beverly Shea. Known as "America’s Beloved Gospel Singer," his unmistakable rich baritone voice has proclaimed the Gospel message in song to over 200 million people around the globe! In crusade after crusade, his passionate solo would set the tone for Billy Graham’s salvation message. Billy Graham once said that he felt the song was more powerful than the sermon.

Knowing how God has used him so powerfully over the last century, I counted it an incredible privilege to be able to spend some time with him and his wife yesterday at their beautiful home in the hills of North Carolina.

At 100 years old, I was surprised at Mr. Shea’s agility, quick wit, and ability to recall dates, names, and specific details from the past. He was overflowing with fun recollections from big crusades, memories of famous people, and touching stories of hymn histories. It was thrilling to hear him share firsthand how the Lord had orchestrated the writing of such favorites as The Wonder of It All and I’d Rather Have Jesus.

His life was overflowing with music! He showed us four organs in his home, including a big pipe organ. The pipes were down in the basement and filled the house with music as he played. He even played a little pump organ for us!

In the Shea living room was a 1934 Steinway

grand piano that Bev Shea’s father had purchased for something like $19. It still sounded great and I enjoyed playing How Great Thou Art, a favorite hymn of mine that first received widespread popularity after Bev Shea sang it at a London Crusade.

After spending a memorable day together, it was clear to me that even at 100 years old, Mr. Shea is still as fascinated with "the wonder of it all" as when he first penned these words back in 1955: 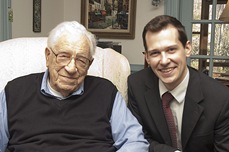 Robert, the third-born son in the Staddon family, lives in Chicago with his wife Kendalyn and two little girls. He enjoys designing websites, improvising on the piano, and playing strategy games with his family.
View all posts by Robert