For one thing it was the year of the Titanic. Today marks the 100th year anniversary of its propitious launch. Who could have guessed what would happen four days later? It has been said that no historical subjects have attracted such long-lived popularity as the first coming of Jesus Christ, the American Civil War, and the classic tragedy of the Titanic.

1912 was also the year that our 47th and 48th states were admitted to the Union: Arizona and New Mexico.

But in our town, it was the year of the new depot. Built by the railroad for the people of the town who knew how much it meant to make a good first impression on the many travelers riding the B&O, the handsome building has stood the test of time and been a part of the city’s Apple Butter Festival every year. Aside from roof damage due to a very unfortunate fire, it retains the

air of respectable architecture and has been kept up by the faithful efforts of Jim Helmick, Bill Price and others. It can be seen from the North Bend Rail-Trail that runs the 70 miles from Clarksburg to Parkersburg. As boys, Michael, Robert and I spent a lot of time riding this section of the trail on our bikes and I can still remember the trains that used to pass our grandparents’ house that way.

In commemoration of the centennial, and the heritage the town has associated with it, we are glad to present a Christmas ornament featuring a fine line drawing of the building in red, circled with a wreath of green on a white background. Ornaments are lightweight and shatterproof. They are available throughout the year this year. In the summer and fall we will hope to have the bulbs present at several Fort New Salem events where I would be happy to sign one for you on the reverse. Long distance orders may be made through the Staddon Family online store under the category of Home Accents (see the tab above).

Just as we would do well to remember the Alamo or the Titanic and those who rose to the occasion at those times, we will neither forget nor underestimate the important part small towns have played and continue to play in the growth and heritage of a great nation. 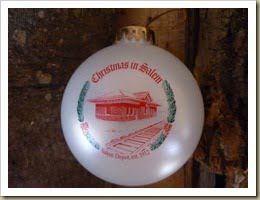